The Vigilantes of Montana 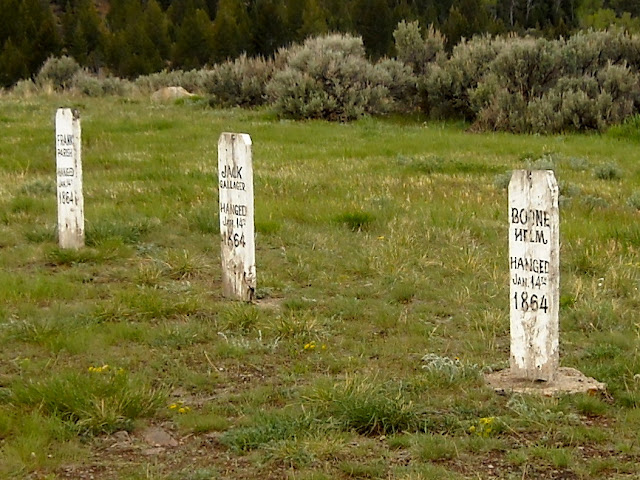 Men came to Bannack, site of the first discovery of gold in present-day Montana, in 1863 for a number of reasons. Many hoped to make their fortunes in gold, find adventure, and enjoy the freedom of the American West. Others were fleeing justice or on the take. Greed sparked crimes.


The Civil War focused the government’s attention away from the settlers’ pleas to tame the West. Those living in the Wild West felt justifiably abandoned. The dearth of law-and-order was never more keenly felt than in the gold camps, where gold dust, prostitutes, and rot-gut whiskey combined to lead men astray. Bannack was one of the most notorious. The first-hand accounts I read while researching the Montana Gold series confirm this. Lucia Darling, who established a school for the town’s children in 1863, gave a scathing report in her diary. “Bannack was tumultuous and rough. It was the headquarters of a band of highwaymen. Lawlessness and misrule seemed to be the prevailing spirit of the place.”

Word-of-mouth held that a gang of road agents known as “The Innocents” had murdered one hundred men. Some believed that the leader was none other than Bannack’s Sheriff Henry Plummer and that several of his deputies were among the outlaws. This naturally did not instill in them feelings of security. The gang was said to operate out of the Rattlesnake Ranch, twelve miles from Virginia City, another boomtown that in 1865 would steal the title of territorial capital from Bannack.

People were fed up with the scourge of road agents who held up stagecoaches carrying gold between Bannack and Virginia City and robbed riders who dared to venture onto the roads. After the brutal murder of a well-liked Dutch miner named Nicholas Tbalt, matters came to a head. Nicholas had ridden off with a bag of gold and simply vanished. On December 21, four days after the discovery of the unfortunate man’s body, a group of vigilantes tried and hanged George Ives for the crime. Two days later, prominent citizens of Bannack and Virginia City formed the Vigilance Committee of Alder Gulch, headquarted in Virginia City.

A slew of lynchings followed as the vigilantes hunted down at least 20 suspected road agents. They left a scrap of paper with the numbers “3-7-77” on each hanged man. Many theories have been ventured as to what these numbers meant. Some claim it gave the dimensions of a grave. Whatever their meaning, the warning these numbers gave was well understood by anyone who found them painted on their tents or cabins. Today, members of the Montana Highway Patrol still wear these numbers.

On January 10, 1863, vigilantes hanged Sheriff Henry Plummer alongside two of his deputies. I used first-hand accounts to paint this scene in Hills of Nevermore (Montana Gold, book 1). Some feel that justice was served; others that the vigilantes hung the innocent. Today, historians disagree over Sheriff Plummer’s guilt or innocence. On May 7, 1993, Montana’s Twin Bridges Public Schools initiated a posthumous trial for Henry Plummer. It ended in a hung jury and the declaration of a mistrial.

The lynching of Jack Slade on March 10, 1864 in Virginia City raised eyebrows. Jack hadn’t actually murdered anyone, although he’d terrorized the entire town by riding his horse down the main street with his guns blazing while drunk. Not long after Jack’s death, government-sanctioned law and order came to Montana. Vigilante violence continued sporadically until 1867, but it became an increasing cause for concern. Miners in Bannack asked the vigilantes to desist, promising to return any judgment they meted out five-fold.

Posted by Janalyn Voigt, escape into creative worlds of fiction. at 12:22 AM