The Star Spangled Banner, the US National Anthem, was not written until the war of 1812. America the Beautiful was not published until 1892. Battle Hymn of the Republic was a Civil War era song sung by the Union Army. My Country Tis of Thee, written in 1832 and our first traditional national anthem, was the United Kingdom's National Anthem with the words changed. The Star Spangled Banner didn't become the official anthem until 1931. 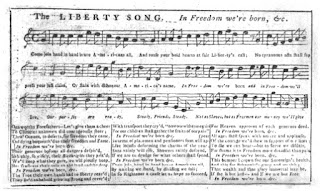 Even though these well known patriotic songs weren't written until well after the United States became a country, there was a patriotic song that became popular during the Revolutionary War. Liberty Song was written by Founding Father John Dickinson. The song was first published in the Boston Gazette in 1768. It was one of the first patriotic songs and included the phrase, "United We Stand, Divided We Fall," for the first time in the sixth verse.

In 1770, the words were changed to reflect growing hostilities toward Great Brittain, and the song was renamed The Massachusetts Song of Liberty.

Here are the original lyrics:


Come, join hand in hand, brave Americans all,
And rouse your bold hearts at fair Liberty's call;
No tyrannous acts shall suppress your just claim,
Or stain with dishonor America's name.
Chorus:
In Freedom we're born and in Freedom we'll live.
Our purses are ready. Steady, friends, steady;
Not as slaves, but as Freemen our money we'll give.Our worthy forefathers, let's give them a cheer,
To climates unknown did courageously steer;
Thro' oceans to deserts for Freedom they came,
And dying, bequeath'd us their freedom and fame.
ChorusTheir generous bosoms all dangers despis'd,
So highly, so wisely, their Birthrights they priz'd;
We'll keep what they gave, we will piously keep,
Nor frustrate their toils on the land and the deep.
ChorusThe tree their own hands had to Liberty rear'd;
They lived to behold growing strong and revered;
With transport they cried, "Now our wishes we gain,
For our children shall gather the fruits of our pain."
ChorusSwarms of placemen and pensioners soon will appear
Like locusts deforming the charms of the year;
Suns vainly will rise, showers vainly descend,
If we are to drudge for what others shall defend.
ChorusThen join hand in hand, brave Americans all,
By uniting we stand, by dividing we fall;
In so righteous a cause let us hope to succeed,
For heaven approves of each generous deed.
ChorusAll ages shall speak with amaze and applause,
Of the courage we'll show in support of our Laws;
To die we can bear, but to serve we disdain.
For shame is to Freedom more dreadful than pain.
ChorusThis bumper I crown for our Sovereign's health,
And this for Britannia's glory and wealth;
That wealth and that glory immortal may be,
If She is but Just, and if we are but Free.
Chorus

Come swallow your bumpers, ye Tories, and roar,
That the sons of fair freedom are hampered once more;
But know that no cut-throats our spirits can tame,
Nor a host of oppressors shall smother the flame.
Chorus:
In Freedom we're born, and, like sons of the brave,
Will never surrender, But swear to defend her;
And scorn to survive, if unable to save.

If you'd like to listen to it, here is the YouTube link. I don't think it will replace the Star Spangled Banner any time soon.

Tamera Lynn Kraft has always loved adventures. She loves to write historical fiction set in the United States because there are so many stories in American history. There are strong elements of faith, romance, suspense and adventure in her stories. She is executive editor of Mt Zion Ridge Press.
Posted by Tamera Lynn Kraft at 12:00 AM