The Ferris Wheel and The Columbian Exposition of 1893

While conducting research for my next book, I’ve had to delve into the goings on in and around the Geneva Lake area during the 1890s (in Wisconsin) that I’ve been featuring in most of my monthly posts here. Realizing that the Columbian Exposition in Chicago took place in 1893, I knew I had to include the worlds' fair of that time in my storyline.


There are so many interesting facts and stories related to the event, I could take a whole year with a different story about the fair every month. It seems appropriate, since this post will be appearing on the Fourth of July, that I focus on how the world’s first Ferris wheel happened to be introduced at the Columbian Exposition. After all, many people attend carnivals and fairs during that holiday and most all of them include a Ferris wheel.


Architect and Director of Works of the Columbian Exposition, Daniel H. Burnham and his partner John W. Root knew they needed something new and unique to outdo the Eiffel tower that was introduced at the previous world's fair in Paris, France. Construction of the fair landscaping and buildings had already begun when bridge-builder George Washington Gale Ferris Jr. told him that he could build an amazing, never-seen-before structure that would blow everyone’s minds. Of course, he didn’t use that phrasing, so familiar to us today, but his words reflected the same meaning. Burnham was skeptical, but no one else had come even close with an idea to match that of a large metal wheel that carried cars of people and rotated vertically.

During one of Chicago’s most frigid of winters, Ferris received the go ahead, and they didn’t have the luxury of waiting for spring to get started. His team used dynamite to blast through three feet of frozen ground in order to build the strong foundation needed to support the giant wheel. Then construction workers had to regularly direct shots of steam to the ground to keep it thawed. Later when concrete was poured, steam was used to keep the concrete from freezing before it hardened. 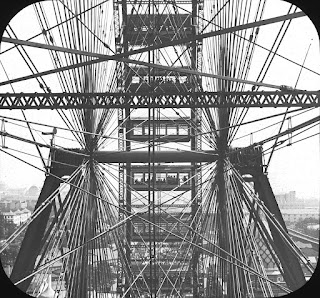 A Unique view from one of the cars on the Ferris Wheel. Note the people
inside the cars.

Fast forward to just before the fair’s grand opening in late spring. Except for some fits and starts at first, the wheel did well on its first dry run with only one of the 36 cars attached. The following day, workers began attaching the rest of the cars, each with a capacity of 60 people. If all the cars were filled to capacity, a total of 2,160 people could enjoy several rotations of the wheel. At the very highest point 264 feet above ground, where each car was stopped for a few moments, people were amazed at how far they could see. To the east, Lake Michigan stretched out to the horizon, to the north were the city’s newest “sky scrapers,” and to the west and south, views of the ever-enlarging city scape seemed to go on for miles.

Whenever I fly into Chicago and the pilot takes us over the city and lake, I can never get enough of the view, which is far higher than 240 feet, but back in 1893, seeing such a sight was unheard of.

No doubt the Ferris Wheel was one of the great hits of the Columbian Exposition. After the fair ended it’s six month run, it was dismantled piece by piece and moved to Lincoln Park, located just north of downtown Chicago. Then in 1903, it was dismantled again and taken to St. Louis, Missouri for the world’s fair there. After that fair, it was destroyed.

The first Ferris wheel may be gone for good, but since then, Ferris wheels of all sizes and styles have been featured at fairs and entertainment venues all over the world. Chicago is not without a standout Ferris wheel today. Navy Pier, an historical building which has been repurposed as an entertainment venue, just constructed a new Ferris wheel to replace the one that has been there for years. I've not ridden a Ferris Wheel for years, but after learning about the very first one, I think I might have to add riding a Ferris Wheel again to my bucket list.

Have you ridden a Ferris Wheel? What is the biggest one you've been on?

Photo from inside the wheel: Brooklyn Museum via Wikimedia Commons
Resource for information: The Devil in White City, Erik Larson, Vintage Books, 2003

Pam has written most of her life, beginning with her first diary at age eight.  Her newest release, Safe Refuge, is the first of three novels in her Newport of the West series. She resides in northern Illinois with her two rescue cats and is only an hour or so away from her home town of Lake Geneva, Wisconsin where she can often be found researching and nosing for new story ideas.