When I first started plotting my Natchez Trace Novel series, I decided to make a trip to Natchez. I live about 2-3 hours away, so it was a great day trip, except my mother and I took two days to tour the area and walk some of the old trace that still exists along the Natchez Trace Parkway.

But one of the most interesting (and looking back, strange) things I did was tour King’s Tavern. Believed to be the oldest building in Natchez, it was built in 1769 (some sources say 1789) and as various times operated as a tavern, stage stop, and a mail station.

Knowing my mother would likely balk at eating dinner at an establishment called a tavern, not to mention that it’s still fairly dark and seedy looking, we opted for something a little less risqué and pricey.

After dinner, though, I was dying (no pun intended) to see King’s Tavern, where Madeline the ghost lives. Madeline was a barmaid at the tavern in the late 1700s. Story has it that Madeline became the mistress of Richard King, the owner, and that the owner’s wife paid two men to have her killed. In 1932, three bodies and a dagger were recovered from the walls of the tavern when a chimney was being installed — two men and a woman. Creepy, huh? 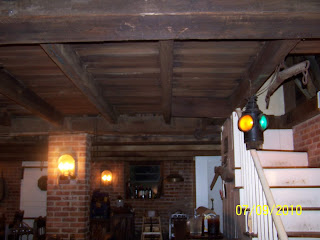 We found the tavern easily enough on a narrow, dark street. Mama was not impressed. I told her to just stay in the car, and I wouldn’t be long. I just wanted to see the building.

So, off I go to this tavern, which in reality is now a very respectable restaurant.

This is where my tale becomes a bit eerie.

When I waltzed in with my camera, the hostess on duty said that she wasn’t supposed to let people tour the building if they weren’t dining. But, she said, since they weren’t very busy that night, she’d make an exception. She pointed me to the stairs and away I went, feeling very adventurous and a bit nervous that the manager was going to find out and throw me out. 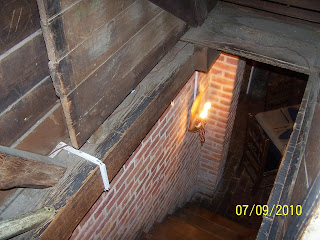 So, there I was, creeping around upstairs taking pictures and getting a feel for what the sleeping rooms and taproom of an 18th Century tavern looked like.

Not wanting to overstay my welcome, and a bit afraid that Madeline would make an appearance and I’d make a fool of myself by screaming, I didn’t stay long. I made my way downstairs and back toward the entrance.


And there, scowling and looking a lot like the ghost from the past with his tails and top hat (not really!), was the manager. I’m sure the hostess was on pins and needles, so I just smiled, sailed on by, and said, “Thank you so much. I enjoyed it!”

“It” is relative, if you’re vague enough.

Anyway, it was all quite fascinating and enlightening. The strange thing is that I don’t know what I expected to find at the tavern. I mostly wanted to get a feel for such an old building, one built a couple of years before my series starts. What I didn’t expect was the tension I felt. Not because of the place, or the stories of ghosts that roam the tavern, but because of my covert trip up those steep, narrow stairs and the floorboards creaking under my feet that might alert the manager that someone was upstairs.

So, tell me the most memorable (scary? Funny? Interesting?) trip or situation you ever found yourself in?