The Jewish festival of Hanukkah starts this Saturday evening. Many Christians don’t know the history behind Hanukkah—I’m afraid we sort of think of it as “the Jewish Christmas.” This is not fair at all. It’s a timely and important story of heroes of the faith.

The story also holds a surprising number of ingredients in common with our Thanksgiving. 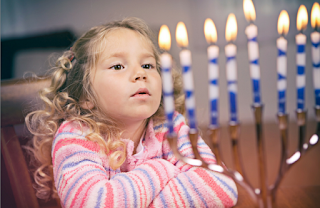 The story unfolded in the second century before Christ. It's told in the books of 1 and 2 Maccabees, which are considered canonical in several orthodox Christian denominations.

Like King James in the Thanksgiving story, the Hanukkah story also starts with a despot. Seleucid emperor Antiochus Epiphanes wanted to see his entire kingdom unite under a single religious system—that of Hellenistic Greece. Israel was included at that time in the Greek Seleucid Empire, which stretched across modern Lebanon, Syria, parts of Jordan, Turkey, Iraq and Iran.

On Antiochus’ orders, Jews caught keeping Shabbat were burned alive. The Emperor banned the Torah and burned any scrolls found. The Temple sacrifices required by God’s law were halted, and Jews were forced to participate in sacrifices honoring the Emperor. Women who defied the law and circumcised their sons were “paraded about the city with their babies hanging at their breasts and then thrown down from the city walls.” (2 Macc 6:1-11)

The ultimate outrage took place when Antiochus set up an altar to the Greek God Zeus in the Temple in Jerusalem, and sacrificed an unclean animal, a pig, in the sanctuary.


A Culture of Compromise


The Greeks had overrun Israel more than a hundred years earlier and many Jews bought into Greek culture. As was also the case in King James’ seventeenth-century England, Antiochus found plenty of people who were willing to blow with the prevailing winds of culture. Antiochus appointed Jews to the priesthood who would go along with his idolatrous system, in place of any Aaronic priests who resisted him.


But as was the case with the seventeenth-century Pilgrims, a remnant of Jews stood determined to stay faithful to God’s word. Jews who wished to keep God’s law hid in the wilderness and many suffered martyrdom. A priest named Mattathias fled Jerusalem with his five sons and settled in Modiim, a small town near Jerusalem. In 167 B.C., Antiochus’ soldiers arrived there and tried to pressure Mattathias into making a detestable offering to the Greek deities. He refused.


I and my sons and my kindred will keep to the covenant of our ancestors. Heaven forbid that we should forsake the law and the commandments. We will not obey the words of the king by departing from our religion in the slightest degree. (1 Macc 2:20-22)

Mattathias led an uprising against the Antiochus’ soldiers, and an armed resistance movement was born.


For the Hebrew Maccabees—as for the Plymouth Pilgrims—the cost of faithfulness was real.

It took three years of bloody guerrilla warfare and several battles before Mattathias’ rebels triumphed and reentered Jerusalem to take back their Temple. Mattathias’ third son, Judas, showed military leadership that gained him the nickname HaMakkaba—“The Hammer” in Aramaic. Maccabee (Hebrew: מכבים‎‎ Machabi) is also an acronym for the Torah verse the insurgents used as a battle cry: "Mi chamocha ba'elim YHWH", "Who is like You among the heavenly powers, Adonai!”


After this, the sons of Israel went up to the Temple and rebuilt its gates and purified the Temple from the dead bodies and from the defilement.

Once the Maccabees won their Temple back, they had to return it to a state of ritual purification. This was no small task.

Hanukkah is best known for its special nine-branched Menorah. When Jewish people light the Hanukkah menorah, it reminds them of a miracle that occurred when the Temple was restored:

And they sought after pure olive oil to light the lamps therewith, but could not find any, except one bowl…. There was in it [enough oil] to light [the lamps therewith] for one day, but the God of heaven whose name dwells there put therein His blessing and they were able to light from it eight days.

The Feast of Heartfelt Thanks


When they were able to resume the sacrifices commanded in the Torah, Judas Maccabeus declared an annual eight-day festival.


Now Judas celebrated the festival of the restoration of the sacrifices of the temple for eight days…. he feasted them upon very rich and splendid sacrifices; and he honored God, and delighted them by hymns and psalms.

Sound a bit like the Pilgrims’ feast? Only grander and longer?


Therefore, the sons of Ḥashmonai made this covenant and took upon themselves a solemn vow… that they might observe these eight days of joy and honour… so as to make known to those who come after them that their God wrought for them salvation from heaven.

As for the Maccabees, they formed a new Hasmonean dynasty that ruled Israel for nearly two hundred years. Sadly, like virtually all human institutions, it eventually went south—it brought the Herods to power.

The Bible doesn’t mention the miracle of the oil. But the New Testament does allude to this annual feast as the “Feast of Dedication.” And it records Jesus observing this feast almost two hundred years after these events took place (John 10:22). (Yes, Yeshua the Jewish Messiah observed Hanukkah—reason enough for us to learn its history!)


A Thought for the Holidays


In fact it was during the Feast of Dedication, while Jesus walked in the court of the miraculously rededicated Temple, that the Pharisees demanded, “How long do You keep us in suspense? If You are the Christ, tell us plainly.”


Yeshua consistently illustrated how the feasts on the Hebrew calendar pointed to Him. To Emmanuel / “God with Us” (Matt 1:23). To our “Wonderful Counselor, Prince of Peace, Mighty God” (Is 9:6). Hanukkah is no exception. Josephus tells us it was known even then as the Feast of Lights. And there was the True Light, walking in the miraculously rededicated Temple! (John 10:31)


There was the true Light which, coming into the world, enlightens every man. He was in the world, and the world was made through Him, and the world did not know Him…. But as many as received Him, to them He gave the right to become children of God… (John 1:9-13)

My debut novel inspired by the Doolittle Raid is finally here!


“A taut, crisp debut achievement that colorfully evokes the Pacific theater of WWII. Start this one forewarned: it's a stay-up-all-night read." 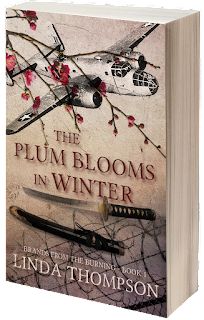 A Doolittle Raid Hero Finds His True Mission--Dave Delham makes military aviation history piloting a B-25 in the audacious Doolittle Raid. Forced to bail out over occupied China, he and his crew are captured by the Japanese and survive a harrowing P.O.W. ordeal. In 1948, he returns to Japan as a Christian missionary, determined to showcase Christ's forgiveness. 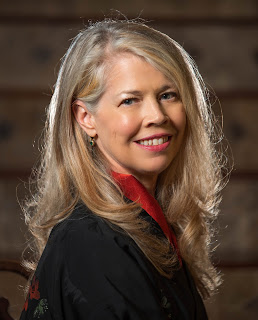