Inside the White House: The Vermeil Room

The Vermeil Room is a chamber on the ground floor of the White House in Washington, D.C. While it's currently used as formal ladies' sitting room, it's most famous for being the room where the White House's collection of vermeil (pronounced ver-MAY), or gilded silver, is displayed.
For over a hundred years, the Vermeil Room was used as a storage room and, around 1825, it was transformed into a staff bedroom. During the 1902 renovation in Theodore Roosevelt's Administration, architect Charles Follen McKim altered several staff bedrooms on the ground floor for public use. The chamber was then used as a lounge adjacent to a ladies' restroom, and was called the Social Room.


The Social Room was updated during the reconstruction of the White House during the Truman Administration. It was paneled in pine, recycled from the house's no-longer-sound original 1815 structural pine beams, as were two other rooms on the ground floor: the China Room and the Library. At this time the Vermeil Room received a new, albeit short-lived name: the Billiard Room.

Shortly thereafter, in 1956, heiress Margaret Thompson Biddle--daughter of a prominent Republican and wife of a major general and diplomat--donated her impressive collection of 1,575 pieces of vermeil to the White House. The vermeil was stored in the Billiard Room, and the name of the room was altered to reflect this change.
The vermeil was displayed here, but it was not put to use until the early 1960's when a friend of Jackie Kennedy's suggested otherwise. At that point, some of the bowls and urns were then used to display flowers and fruit on the state floor. The White House was being refurbished at around the same time, and Kennedy's decorator, Stéphane Boudin, refurbished the Vermeil Room. He covered the display shelves with white velvet and painted the room a soft blue. He also added neoclassical mantels, white damask drapes with blue fringe trim, a blue and white carpet, and a gilded chandelier to echo the vermeil. The room was now a showcase for the vermeil, not a sitting room.
Within a few years, First Lady Pat Nixon redecorated the room with green paint and draperies of gold, green, and blue. The room was altered again in the administration of George H. W. Bush, and again in 2006 by First Lady Laura Bush, her decorator Ken Blasingame, White House curator Bill Allman, and the Committee for the Preservation of the White House. The walls were painted ivory with a tint of green, and a circa-1829 center table was placed here, along with a sofa from around 1815. The room's lolling chairs were reupholstered in white silk damask. Drapes of olive and gold covered the windows, and a carpet woven in 1860 was placed on the floor.
Today, the walls have a soft gold tint. Portraits of several first ladies are usually displayed here among the vermeil: the portraits of Jackie Kennedy (donned in a complimentary gown of gold), Lady Bird Johnson (wearing yellow), Frances Cleveland, Elizabeth Monroe, Eleanor Roosevelt, Pat Nixon, Lou Hoover and Nancy Reagan have all hung here, although at the time of my visit in June of 2018, Reagan's portrait hung in the downstairs hallway.

Public tours take visitors past the Vermeil Room, but everyday visitors cannot enter. One can only imagine what it must be like to sit here for a cozy conversation with a first lady, surrounded by gold.

BIO: Susanne Dietze began writing love stories in high school, casting her friends in the starring roles. Today, she's the award-winning author of over a dozen romances with Timeless Heart. A pastor's wife and mom of two, she loves fancy-schmancy tea parties, the beach, and curling up on the couch with a costume drama. Visit her website, www.susannedietze.com, and sign up for her newsletter: http://eepurl.com/bRldfv 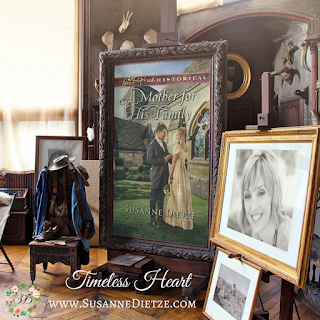