A Bit of ROMANCE NOVEL History

If there is a romance gene, I’ve got it. I know romance novels haven’t always had the best reputation, but they are the hottest selling genre, with sales of over a billion dollars annually. So when did this love of romance novels begin?

Before Gutenberg invented the printing press, making romance novels more accessible to the masses, romance stories existed. The ancient Greeks had them as well as many other cultures. The ones that weren’t copied over and over by hand were told by word of mouth and acted out as plays, as were other types of stories. There is a list of over twenty ancient Greek romance novel titles, most are but mere fragments of the original stories. Only five of them have survived in a nearly completed state.

The Native Americans of Mackinac Island, Michigan have a tale about Arch Rock on the Island. 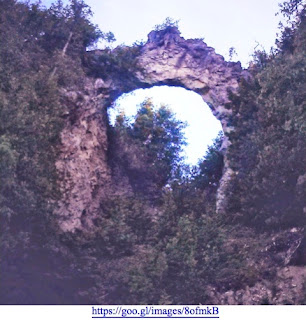 An Indian maiden was tied to the rock by her father when he forbid her to marry the brave she was in love with. Her tears melted away the gigantic hole in the limestone rock, leaving the arch we see today. Her warrior rescued her and took her with him to his people. Though this story is used to explain a geological formation, it’s interesting that the Native Americans chose to use a romance theme to explain it.

The first recognized modern romance novel is considered to be Pamela or Virtue Rewarded by Samuel Richardson in 1740. 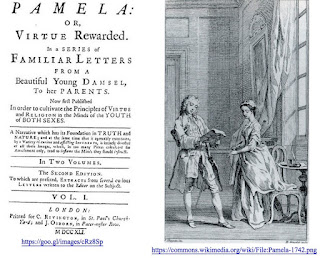 Then in the early 1800s came Jane Austen and then Charlotte Brontë in the middle of the century. Romance novels became more popular after World War I. Walter Scott developed the popular mass-market version of the historical romance novels which is said to have begun in 1921 with the publication of The Black Moth.

Mills and Boon, British publishers, began publishing hardback romance novels in the 1930s, which were popular across England. In 1957, Harlequin Enterprises, a Canadian company, began releasing Mills and Boon’s category romances in North America. In the 1970s, Harlequin bought Mills and Boon and other companies published romance novels as well that were now being sold in mass-market stores and other places where women shopped like supermarkets.

I think of Grace Livingston Hill (1865-1847) as the forerunner to the current modern-day Inspirational romances, both category and stand-alone. She wrote over 100 novels and short stories. Her published works span from the 1870s until after her death in 1947. Her last novel, Mary Arden, was finished by her daughter Ruth and published in 1948. 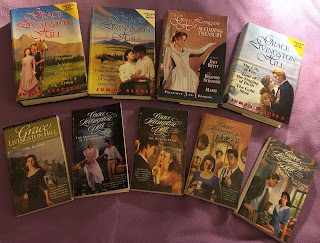 This reader (and author) is happy romance novels are still going strong.

Love Is One of Life’s Greatest AdventuresSeven daring damsels don’t let the norms of their eras hold them back. Along the way these women attract the attention of men who admire their bravery and determination, but will they let love grow out of the adventures?
Zola’s Cross-Country Adventure, a 1904 road-tripZola Calkin sets out on an adventure to be the first woman to drive across the country. Will the journalist tasked to report her presumed failure sabotage her efforts? Or will he steal her heart?

MARY DAVIS s a bestselling, award-winning novelist of over two dozen titles in both historical and contemporary themes. Her 2018 titles include; "Holly and Ivy" in A Bouquet of Brides Collection (January), Courting Her Amish Heart (March), The Widow’s Plight (July), Courting Her Secret Heart (September), “Zola’s Cross-Country Adventure” in The MISSAdventure Brides Collection (December), and Courting Her Prodigal Heart (January 2019). She is a member of ACFW and active in critique groups.

Mary lives in the Pacific Northwest with her husband of over thirty-four years and two cats. She has three adult children and two incredibly adorable grandchildren. Find her online at: