When it comes to precipitating causes that led to the American Revolution, most students of history focus on the taxation of tea. Rarely does one think of trees.

Pine trees became a particular thorn in the flesh for New Hampshire farmers in 1772 when a law, known as the White Pine Act, was passed by Parliament. This law made it illegal to remove from the land “any white pine tree of the growth of twelve inches diameter.” This meant that any landowner who wanted to remove these trees for farming or building purposes was forced to leave the trees there. The Royal Navy declared them to be their own.

So why was the Navy interested in these large pines? The answer was simple: Ship masts. 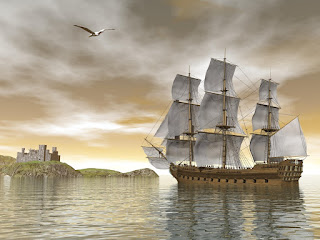 The best masts to withstand the fiercest winds at full sail were “single stick” masts made from one tree. By the early 1700’s the forests of England were virtually gone, but Colonial America had a seemingly endless supply of trees. And the white pine was by far the preferred source for ship masts to supply seaworthy vessels for the growing Royal Navy.

Although the white pines were considered the property of the King of England for many decades, it was not until 1772 that the stricter law passed by Parliament became an issue. A Deputy Surveyor of the Woods, appointed by then-Governor John Wentworth, began actively enforcing the law. The surveyor, John Sherman, would mark a large arrow on trees of the 12-inch plus diameter with three strikes of an axe head, forcing farmers to let them stand for the crown’s eventual use. Farmers ignored the law and Sherman suspected as much.

Most of the mill owners paid their fines in defeat. But one town, Weare, refused to pay. The leader of the mill owners, Ebenezer Mudgett, was arrested and soon released with the agreement that he would provide bail in the morning. 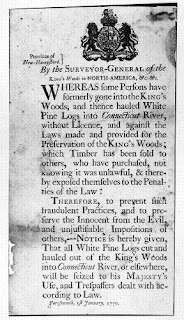 Instead, an incident that became known as the Pine Tree Riot occurred. A band of 30-40 men (led by Mudgett) blackened their faces with soot and assaulted the sheriff and his deputies who were lodging in a nearby inn. The mob cut off the ears of the men’s horses and shaved the animal’s tails and manes, before forcing the lawmen out of town through a jeering crowd.

Despite this brutality, the men—who were later arrested—pled guilty and were given a relatively minor fine for their acts. It is believed that the judges were sympathetic to the colonists and the excessive taxes levied in one form or another—even on their very own trees.

This Pine Tree Riot occurred over a year before the tea was thrown into Boston Harbor in December of 1773. When Revolution was declared in 1775, many New Hampshire colonists readily picked up their muskets to join in the fight for liberty from England. It was a fervor for justice that had its roots in the white pine trees of New England.

Elaine Marie Cooperhas two historical fiction books that recently released: War’s Respite(Prequel novella) and Love’s Kindling. Love’s Kindlingis available in both e-book and paperback. They are the first two books in the Dawn of AmericaSeries set in Revolutionary War Connecticut. Cooper is the award-winning author of Fields of the Fatherlessand Bethany’s Calendar. Her 2016 release (Saratoga Letters) was finalist in Historical Romance in both the Selah Awards and Next Generation Indie Book Awards. She penned the three-book Deer Run Sagaand has been published in numerous magazines and anthologies. You can visit her website/ blog at www.elainemariecooper.com