Texas Rangers . . . Not the Baseball Team

Lawmen of Texas
By Martha Roges

Many western novels, TV shows, and movies have featured the law enforcement group known as the Texas Rangers. From the early days of their organizing to modern times, the Texas Rangers are often seen as larger-than-life heroes. Texas even has a major league baseball team based in the Dallas-Ft. Worth metro-plex, named for them.

The history of the organization is colorful and full of tall tales from the days of Judge Roy Bean. I’ve always been fascinated by stories about these men who have served our state for over 175 years and are still going strong.

Stephen F. Austin unofficially created the group in a call-to-arms action written in 1823. Austin called ten men to act as rangers to protect the 600-700 new settlers who arrived in Texas following the war with Mexico. Although Austin 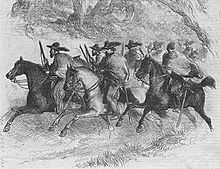 may not have officially called them Rangers, lore of the men dates this year as the one in which they named themselves. Austin named Captain Morris to be its head. Then, on August 10, 1835, Daniel Parker presented a resolution to the Permanent Council and created a body of rangers to protect the southern border of Texas. Robert McAlpin Williamson serves as the first Major of the Texas Rangers.

Then, following the Texas Revolution, Mirabeau B. Lamar, president of the Republic of Texas led a force of fifty-six men to fight the Cherokee and the Comanches who had supported the Mexicans in the Revolution. After the second election of Sam Houston as president, the Ranger force increased from 56 to 150 men.

Their duties ranged from participating in Counter-guerilla warfare against the Mexicans and Indians to enforcing the law in frontier towns. With the annexation of the Republic into the United States, several companies of the Ranges were mustered into federal service for the Mexican-American War. 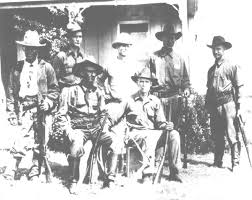 Photo of a group of Rangers in the early 20th Century

Twice the group disbanded only to be reformed. At the end of the war in 1848, they largely disbanded until Governor Richard Runnels in 1857 allocated $70,000 to fund the Rangers under John Salmon Ford, a veteran of the Mexican War. The Rangers, now with about one hundred men, fought in skirmishes with   the Indians to protect settlers and their property.

Although dissolved by federal authority during the Civil War Reconstruction era, it was reformed as soon as Texas reinstituted home government.  A series of battles in the 1860’s proved to be a turning point in their history. Due to the lack of U.S. Army forces needed to protect the huge expanse of Texas, the Rangers were called into duty and dealt with threats from Indians and Mexicans. Their successes in these battles earned them the reputation of force that could handle about any situation because of knowledge and familiarity with the land.

The second disbandment came at the end of the Civil War when federal authorities disbanded them during the era of reconstruction. However, as soon as home government for Texas was re-established, the group reformed.

Badges were made out of of old coins. 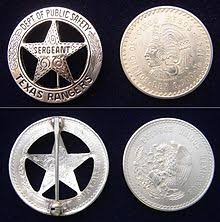 The duties of the Rangers ranged from fighting off Mexicans at the border and protecting property, to protecting presidents visiting in Texas, to capturing famous outlaws. Such was their reputation that writers built on it to create a mythology of the Old West such as in the character of the Lone Ranger who is said to have drawn his alias from having once been a Texas Ranger. This group is from 1896.


A museum in Waco, Texas is dedicated to the stories of the Texas Rangers with pictures and artifacts to satisfy even the most avid fan of the history of the Rangers.

A historical marker is placed at the site of Camp Roberts, the first Ranger Station in the Panhandle established in 1879. 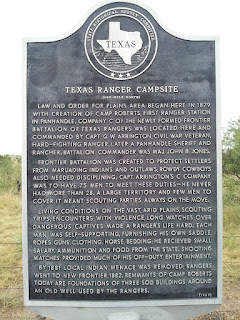 Next month I will share more about these daring and brave men who still serve Texas and some of their more famous captures and battles.