This past weekend a friend from
"back east" and I journeyed to the western part of my home state of Nebraska. We visited the Dowse Sod House pictured at right, which was built in 1900 and was the first home of newlyweds William and Florence Dowse.

William and Florence's son, Philip, was born in 1909 and reminisced about life in the soddy when interviewed many years ago. "We had a big root cellar and in winter we'd get a old, crisp apple for a treat. 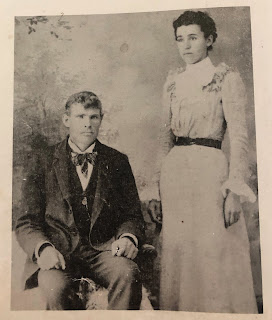 Oh, they were good! At night mother would read us boys Zane Grey novels by the light of a kerosene lamp ... Sometimes we'd play checkers. We didn't have a lot of things, but it seemed we were always happy."


Sod houses are unique in that they are literally made of dirt. The grasses that grew on the prairie formed such dense root systems that the earth could be cut into bricks and laid up into walls like the ones you see exposed on the Dowse home. In fact, the root systems were so tough that a special plow was invented to facilitate the "sod-busting." Sod bricks were laid grass side down. The walls were often plastered over.

I remember reading about one family who came to Nebraska from Czechosolavaki in 1885. They had eight children and lived in a one-room dugout that measured about 20 by 24 feet. What was that like? Here are some first-person accounts from sod house pioneers that I've collected over the years (Note: spelling errors in the original sources have not been corrected):


"I don't see how my mother did the many things that fell her lot to do aside from the regular household duties, gardening, helping milk, caring for the milk, which had to be set in crocks and tin pans and skimmed by hand, churned to butter before it could be sold; she manufactured all our clothing from cloth bought by the yard, underwear from cotton flannel, skirts, overalls for summer, jeans for winter, all our socks and stockings to knit, and all this sewing to do by hand, she also made our straw hats ... "

"I am so tired I do not know as I can tell you all the particulars tonight ... I have been on the trot all day and have not done much either only washed."

"I had a whaleing big washing last week. It was so stormy I had to dry [the shirts] in the house I could not hang them but what our heads would rub some of them when I went to Iron I was almost spunky because they did not please me the fine shirts especialy."

"I had to make some new clothes for the girls to wear to the fair and I was very much hurried as I done it all by hand. Mother, I often wish I was close to your machine for three girls makes lots of sewin."

"We had a very long and cold winter set in early and had lots of snow ... 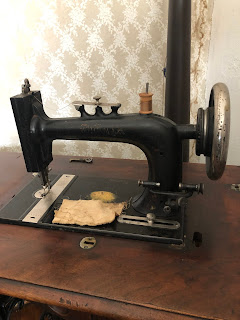 J.T. had bought me a new Singer machine and I made good use of it making all the clothes we wore. I had done this before by hand only occasionally taking some long seams down to sew on Mrs. Strohls machine."

"All we had to eat that first hard winter was jack rabbits and sorghum."

"One morning I said we had better put the bedding out in the sun for an airing ... all the things on the clothesline, but the feather beds ... spread on the grass. About the middle of the afternoon they were brought in ... Along in the night, I felt something cold and clammy at my feet, and called to my husband. He said 'It's just your imagination, go to sleep.' In the morning I got up to dress and I heard something go k-plop on the floor ... there was a big bull snake three and a half feet long ..."

At first we had no fences and, as the cattle must have pasture, it fell to my lot to watch them graze. Dinner time was the only time that I came home. I tried to pass the time away by reading, piecing, quilt blocks, and hunting wild flowers.

How about you? Do you enjoy visiting historic homes? Do you have a favorite architectural style? 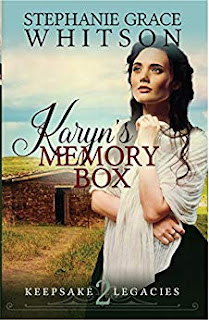 My novel Karyn's Memory Box opens with the words "Dirt. He expected her to look at dirt and call it home." Karyn Ritter has just arrived in Nebraska from Germany and she is not impressed with the soddy her husband has constructed.

Available as a trade paperback and ebook for Kindle. The ebook is only $2.99.

Posted by Stephanie Grace Whitson at 2:39 AM