In the Middle Ages, the unicorn was revered as an important symbol of Christ and stood for purity. How times have changed! Nowadays, a sparkling white unicorn posed delicately before a rainbow is a somewhat ludicrous cultural icon. Funny unicorn quotes abound, such as this internet meme: “A friend told me I’m delusional. I almost fell off my unicorn.” Those who don’t view unicorns with scorn think of them as awe-inspiring mythical creatures. Bruce Colville, a young adult fiction author, summed this mindset up well when he said that “…as long as we can dream, there will be unicorns.”

The Bible refers to unicorns nine times (Numbers 23:22; Numbers 24:8; Deuteronomy 33:17; Job 39:9; Job 39:10; Psalm 29:6; Psalm 92:10; Isaiah 34:7). The Biblical references introduce a problem for those determined to explain the creatures away without denying the truth of the Word of God. It has been postulated that the unicorns mentioned in Scripture were actually one-horned rhinoceroses endemic to Eurasia. Some translations refer to them as 'wild oxes,' but this is disputed. According to Scripture, unicorns were quite strong, a feature the rhinoceros certainly displays. The Latin name for the one-horned rhinoceros is Rhinoceros unicornis. Our modern image of the unicorn is of a hoofed creature similar to a horse, but even this fits the theory. The rhinoceros is a distant relative of the horse.

A team of Russian paleontologists published an important study in the Journal of Applied Science in February, 2016. In the Pavlodar region of Kazakhstan, they had discovered fossilized fragments of an Elasmotherium sibiricum or “Siberian unicorn” that dated from about 29,000 years ago. Until then, scientists had thought the Siberian unicorn died out around 350,000 years ago.
The new timeline placed the creatures at a time when humans also inhabited the Earth. Scientist believe that people migrated throughout Asia over 50,000 years ago. It's entirely possible that sightings of the Siberian unicorn led to the unicorn myth.
The Siberian unicorn was anatomically between the rhinoceros and horse families, according to Ancient Origins, citing early descriptions published in the journal, Nature in 1878. At over 6 feet tall, 15 feet long, and 9,000 pounds, the animal more closely resembled a rhinoceros than a horse in stature. This reminds me, though, of the stout unicorns found in early renditions of the unicorn.

Could the mythical unicorn have evolved over time from the Siberian unicorn, and was that the unicorn mentioned in the Bible? We may never know for certain, but to me it seems likely. 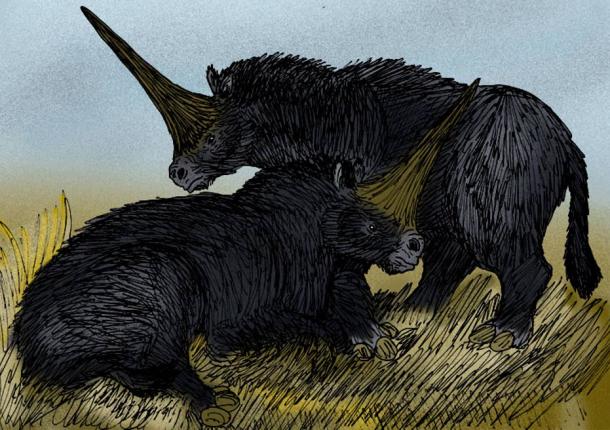 In Tales of Faeraven, my medieval epic fantasy series, ‘unibeasts’ are etched into marble fireplaces and woven into tapestries. They never appear in nature, however. I modeled the storyworld after 13th-century Europe, when unicorns had retreated into the deepest shadows of human imagination. Whatever creature flitted through the pages of the Bible and inspired the mythical unicorn was long-vanished, leaving only the wistful remembrance of strength and grace.


Posted by Janalyn Voigt, escape into creative worlds of fiction. at 12:01 AM