Something to Digest: The Strange Partnership of William Beaumont and Alexis and St. Martin

William Beaumont’s medical training consisted of an apprenticeship of observation more than book learning. The son of a Connecticut farmer and Revolutionary War veteran, Beaumont left home at the age of 22 to embark on his training and career. After receiving a medical license in Vermont, he eventually signed up to be a surgeon’s mate in the United States Army. He served during the War of 1812 before he went into private practice for a few years before returning to the military and being assigned to Fort Mackinac on Mackinac Island in 1821. 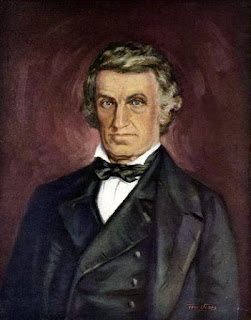 In 1822, French-Canadian voyageur, Alexis St. Martin, was visiting the post of the American Fur Trading Company on the island. He was accidentally shot at close range by a shot gun. The pellets penetrated his abdomen doing damage to his stomach and his ribs. Beaumont was summoned to treat him, though St. Martin wasn’t expected to survive. Still, the surgeon committed to the young man’s care, taking time to followthrough and check on him.

St. Martin did survive, but the wound didn’t close. Instead, the open outer skin of the wound adhered to the layer underneath creating a permanent opening to the stomach called a gastric fistula. When he ate, food fell right through the hole in his side unless he kept a compress over it. He could no longer work for the fur trading company and the local authorities wanted to send him back to the Quebec area. Dr. Beaumont feared he wasn’t strong enough for the trip and offered to take his patient in. He hired St. Martin to be his servant.

In 1825 St. Martin agreed to allow Beaumont access to perform experiments on his open stomach. Pieces of food on a silk string were dipped into the gastric juices while the doctor observed how he digested the food. St. Martin went with Dr. Beaumont to where he was stationed at Niagara Falls and Washington, D.C. St. Martin eventually married and had several children. When he received word that one had passed away, in 1831, St. Martine wanted to return to Canada to be with his family. He returned with his family to Beaumont where he was stationed in Wisconsin.


Beaumont wanted to bring St. Martin with him to St. Louis, but he was determined to return to Canada with his family. The research finally ended in 1833, when they parted ways.

Beaumont’s research culminated in a 280-page book covering the physiology of digestion, even the effect that mental disturbances have on gastric juices! It was truly groundbreaking research at the time.

Though the doctor sent letters to St. Martin to try and convince him to return for more research, the former fur trader wouldn’t consent unless he could bring his whole family with him and receive an agreeable amount of compensation. Beaumont lived the rest of his life out in St. Louis in private practice as a doctor of some renown. He died at the age of 68 in 1853 from a closed head injury after slipping on icy steps.


While St. Martin was occasionally taken to medical facilities for show, St. Martin lived, mostly in poverty, until 1880 when he died. His family made sure that his body had begun decomposing and buried him in a secret grave to keep curious researchers from performing illegal autopsies on his corpse.

Dr. William Beaumont and Alexis St. Martin made an interesting pair, dependent on one another for a time. While they may not have developed a close friendship due to class and personality differences, their strange partnership opened a window on human digestion to the medical community as never done before.

The Last Memory in The Great Lakes Lighthouse Brides Collection


Lighthouses have long been the symbol of salvation, warning sailors

away from dangerous rocks and shallow waters.