Last month, I began a short series on ghost towns, and began in the central state of Kansas. If you missed that post, you can read it here: https://www.hhhistory.com/2019/05/ghost-towns-of-kansas.html.

Since summer break has just begun, I'm going to stick close to home for this month's post. I've spent a bit of time the past 12 years exploring several areas of Colorado and have become increasingly fascinated with its culture, history, and people who made this state what it is today. Let's take a little jaunt into the history of some well-known towns in the Centennial State.

Year round you can explore some of the best abandoned, old ghost towns throughout the state of Colorado. They are full of history and among the best-preserved in this region. Some high elevation former mining camps are only accessible in the summer. Two-wheel-drive cars will be fine for most, though, some require a high-clearance 4×4 or a hike to access them. These towns were abandoned for different reasons, some due to mining or economic struggles, others due to natural forces like cold winters.

Wouldn't you love to have seen some of these towns in their heyday?

I have several files with research on these, and at some point in the near future, I'll be using these towns as settings for some of my novels highlighting the stories shaping the history of Colorado. So, stay tuned! 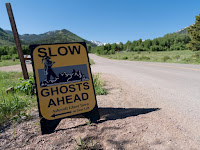 Ashcroft is a short 10 miles from Colorado’s skiing mecca Aspen and is one of the state’s most well-intact ghost towns. Simply drive down the paved road known as Castle Creek to view Ashcroft. In the late 1800s, Ashcroft was a booming mining town and home to nearly 20 saloons, 2 newspapers, and over 2,500 residents. However, it didn't take long for that boom to diminish. As the 19th century came to an end, mine closures in Aspen led to a fast decline, and only two residents still lived in the town by 1900. The Aspen Historical Society guides a tour through the town’s jail, hotel, saloons and stable. 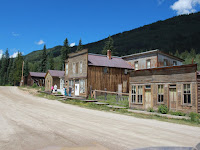 No, there is no connection to the St. Elmo's Fire movie from 1985 movie or the lightning phenomenon. (grins) An amazing fact about St. Elmo is forty antique buildings still remain in this ghost town. St. Elmo, located west of Buena Vista, sits at 10,000 feet in the Collegiate Peaks. This town was a former gold mining town but it now lives as one of the most well-preserved ghost towns in the Centennial State. The town was founded in 1880 and saw a 3-year boom due to the nearby railroad. However once mine production ceased and the tunnel closed, many residents deserted St. Elmo, and it was all but abandoned by 1922. 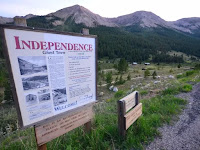 This small town is located high in the mountains near Independence Pass. Gold miners were drawn to Independence in the late 1800s because of its location and the rich veins that were found in nearby areas. In its heyday, more than 1,500 residents lived in Independence. Due to harsh winters, a rough route for stagecoach riders, and the proximity to the commercial hub of Aspen, Independence saw a huge decline. Only one resident was found still living in Independence in 1899. Now, the Aspen Historical Society gives tours of this ghost town where several log cabins are still found in the area. 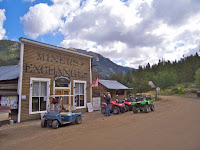 Tincup, near Gunnison, is proof that the Wild West existed. Founded in 1879 with the name Virginia City, Tincup grew among rowdy cowboys and gold miners. Since there were towns in both Nevada and Montana with the same name, Tincup was chosen as the new name because the first person to find gold there panned it out of Willow Creek and carried it in a tin cup. Tincup was a wild city full of gunfights and bar feuds. Still today, a few people actually reside in Tincup. Old buildings have been preserved, and there are even vacation homes for travelers. 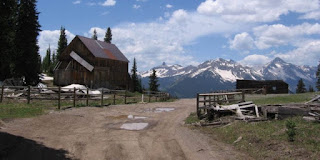 Located 10 miles from the town of Telluride, Alta was once a booming mining town from 1877 to 1940. Alta is another Colorado ghost town that is listed on the National Register of Historic Places. Visitors to this ghost town can see many of the original buildings, which look spectacular against the town’s mountain scenery. Alta’s demise was caused by a slowing mining industry, a fire that destroyed Alta’s main mill and vandalism during the 20th century. Approximately 700 African Americans settled in Dearfield in the early 1900s. This ghost town is known as Colorado’s only all-black settlement. The Great Depression and the Dust Bowl caused residents to vacate this eastern Colorado town, which is located 25 miles east of Greeley. However, three structures still stand in Dearfield, a gas station, diner and a home. Efforts are now being undertaken to preserve this unique Colorado ghost town.

* Have you read any books with a former real-life setting that is now a ghost town?

* Which of the towns featured in today's post would you put on your "must-see" if you were traveling through Colorado?

Tiffany Amber Stockton has been crafting and embellishing stories since childhood, when she was accused of having a very active imagination and cited with talking entirely too much. Today, she has honed those childhood skills to become an award-winning and best-selling author and speaker who is also an advocate for literacy as an educational consultant with Usborne Books. On the side, she dabbles in the health & wellness and personal development industries, helping others become their best from the inside out.