History of tourism and lobster fishing in Maine 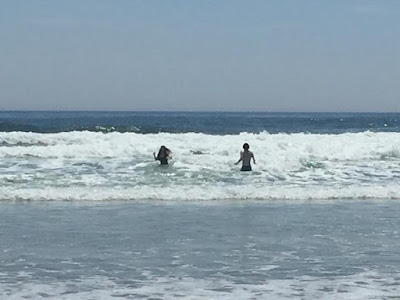 For the kickoff of vacation season, I thought I would tell about my favorite destination. Maine has been my family's happy place since before I was born. My people are New Yorkers, Irish folk who settled in and near New York City from the mid 1800's. I come from farmers, music teachers, hatters, soldiers,  railroad workers, carpet factory workers, landscapers, and building superintendants... and it took several generations before vacation was even an option to my hardscrabble clan. But in the 60's my parents moved to Maine to follow my dad's work as a chemist. That spawned my mother's and sibling's love for Vacationland, with its rugged granite boulder-strewn beaches and crystal lakes, its glorious summers and world-famous seafood. 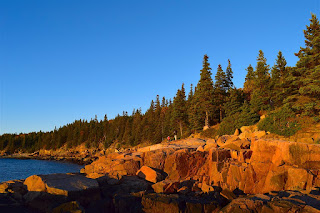 Downeast Maine is a term coined by city folk from Boston and New York who had to sail downwind and east to arrive at this ready-made escape from urban life. Because of its relative proximity to major metropolitan populations, Maine's attraction as a tourist and artist colony came relatively early in the state's history. "Foreshadowing the development of Maine’s tourism industry, Henry David Thoreau left Concord, Massachusetts in 1846 for “Bangor and the backwoods” to explore and write about his observations. In 1848 Mount Kineo House, a tourist hotel in Greenville, was completed, beginning a century long resort tradition." (https://maineanencyclopedia.com/brief-history-of-maine/) 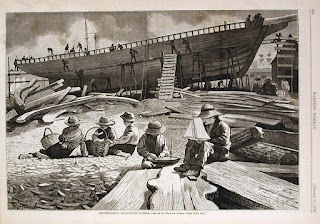 Early industries in Maine involved the abundant natural resources in white pine, limestone, slate, granite, supplying housing materials all over the east coast and as far west as Colorado. Papermaking sprang up in the latter half of the 1800's from the lumber and mill industries' abundant wood pulp. Maine's plentiful and deep harbors and river systems encouraged a centuries old maritime tradition, foraying into world class shipbuilding and trade with an international market. Cod, mackerel, herring, and menhaden fishing exploded with canneries and the expansion of rail, carrying a ready food supply to the westward push in the mid 19th century. 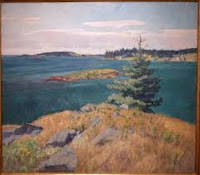 But it was the wealthy city folk who populated coastal towns in summers, bringing tourist dollars and driving a demand for real estate in places like Kennebunk, York, and Old Orchard Beach. Artists flocked to places like Ogunquit and Monhegan Island for its picturesque scenery from mid century, colonizing by 1890. 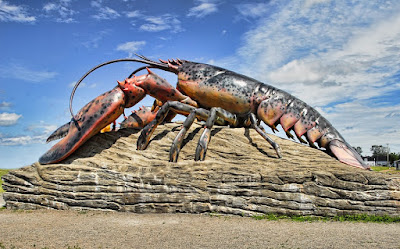 Modern day Maine is famous for the best lobster fishing in the country, and exporting the premium seafood all over the world.  But this iconic product of Maine wasn't always a delicacy. In colonial times and beyond, lobsters were so plentiful that one could walk out onto the tidal pools and collect their pick of giant specimens, if they were desperate enough to do so. In fact, residents of the Massachusetts Bay Colony reported two-foot high piles of the the creatures washed up on shore. They were like seaweed, ocean trash, the cockroaches of the shore. No one in good standing would admit to eating them--they were considered the food of convicts, indentured servants and those very low on the socio-economic scale. 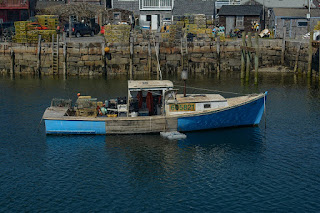 Change came slowly, beginning as early as 1820 when lobster was recognized as a ready source of protein for nearby city populations. Canneries started in 1836 such as Burnham and Morrill (B&M) which made lobster meat easy to send long distances, and cheaply. Lobster traps replaced the early method of scooping the crustaceans off the shore by 1850, and boats called smacks which held tanks for transporting live lobsters brought "smackmen" trawling the coast to sell to burgeoning markets.

Lobster was introduced to the railroads as something new, a delicacy. Passenger rail chefs took advantage of the fact that since people far away were unaware of its early stigma, it was easier to re-brand the rich tasting meat, which could still be procured relatively inexpensively. Restaurants started to carry lobster meat in their salad section--as a side, not quite entree-worthy--by the late 1800's. The government considered lobster a delicacy during WWII so it was exempt from rationing, when the average family had exposure to its tasty charms. Losing its stigma entirely by 1950's, lobster served in fine dining restaurants in the big cities such as New York, Chicago and San Franscisco  brought the demand to a premium. 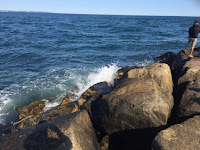 In the 60's Maine started marketed itself to the middle class family as an accessible vacationing destination, and that's where my story comes full circle. My parents moved to Sanford following a growing and changing job market, during the development of plastics, in which my father held patents for his chemical company. Living inland, my mom found braving their first Maine winter rather rough, but oh, those glorious summers! 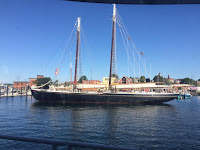 Family legend still tells of the early clam shacks and lobster pounds and inexpensive beach rentals, long walks along the pristine coast before major tourism kicked in... and we were hooked. Though my family moved back down the east coast before I was born, eventually settling in upstate NY, we never lost our love for this rugged land of pine and beach, sand and stone, and we make our annual migration to whale watch and sunbathe religiously. 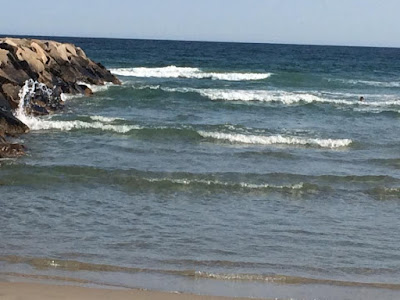 What about you? Have you been to Maine or eaten Maine lobster? Or visited New York or Boston and noted the beautiful Maine granite used in the old buildings? Perhaps seen paintings from the beautiful coast or been impressed with the schooners, whalers and ships built in Maine shipyards of the 18th and 19th century? Maybe you've read Thoreau and been drawn to your own personal woodland experience? Thank the hardy people of Maine for the many contributions to our country's history and culture. 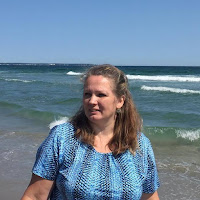 "Where every underdog has his day."
Kathleen L. Maher’s first crush was Peter Rabbit, and she’s loved conflicted heroes ever since. She has two novellas in BARBOUR BOOKS' collections: Victorian Christmas Brides and Lessons on Love. Winner ACFW Genesis Award. Author of Sons of the Shenandoah Series: The Abolitionist's Daughter and The Chaplain's Daughter.
Kathleen and her husband live in an old farmhouse in upstate NY with their children and a small zoo.
Follow me at:
amazon.com/author/kathleenlmaher
https://www.facebook.com/KLMaherAuthor/
http://www.pinterest.com/kathleenlmaher/boards/
https://www.goodreads.com/user/show/2531698-kathleen-l
https://www.bookbub.com/profile/kathleen-l-maher