The legacy of the Texas Rangers ranges from heroic stories in battle, capturing or killing of notorious bandits like Sam Bass or Bonnie and Clyde to legends of the Lone Ranger and T.V. shows like Walker: Texas Ranger. Most of the legends and stories contain some elements of truth even if they are embellished with retelling.

For some reason, many history buffs and western writers have chosen these lawmen to be heroes of their stories and novels. One thing is certain; they are one of the longest running law enforcement agencies in the country still in existence today.

Although today they mainly patrol our highways in Texas and assist other law enforcement agencies, they live up to the legacy of all those who have gone before. 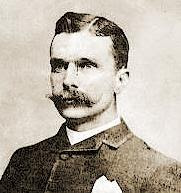 Two of their more famous encounters with outlaws and fugitives were the ones with Sam Bass and Bonnie and Clyde. One took place in the 19th century, the other in the 29th, but they both ended the deaths of the criminals.

Sam Bass, born in Indiana in 1851, ran away from home in 1859 and ended up in Texas. Then he was on the move again and traveled to Deadwood, South Dakota. There he formed his first gang of six men. As the gang robbed banks and trains, all but Sam either were killed or fled the territory, leaving Sam alone. 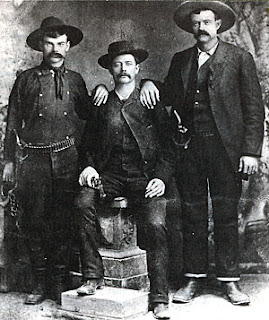 He returned to Texas in 1871 and formed another gang. Sam is pictured above with two of his main gang members. After more robberies, many law groups were then on their tail, including the Rangers. Jim Murphy, one of the gang, cut a deal with the law to save his father. He led the group to Round Rock, Texas where a skirmish took place. Sam was wounded but Frank Jackson, a loyal friend of Bass as well as gang member, rescued Sam and took him out of town. The Rangers later found him propped against a tree.

Sam identified himself, but unsure if it was really him, Frank Murphy gave confirmation and Bass was arrested. Who actually fired the shot that wounded Bass and caused his subsequent death has been argued about, but the official ruling was that the fatal blow came from Ranger Dick Ware. At right is the headstone and memorial set up for Sam at Round Rock Cemetery.

More information can be found at: http://www.forttumbleweed.net/historybass.html 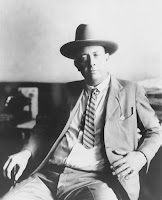 One of the most famous confrontations with known criminals is that of Bonnie and Clyde. Frank Hamer, pictured at right, is the man who led the investigation and subsequent ambush of the couple in 1934.

Clyde Barrow, age 21, met Bonnie Parker in January of 1930 in Texas when she was 19. Barrow was single, but Bonnie was married to a man in prison after a murder conviction. Clyde went to jail for burglary, but Bonnie helped him escape by smuggling a gun to him. He was captured and sent back to prison but was paroled in 1932.

He met up with Bonnie again, and they headed into a two year crime spree that included auto theft, burglaries, robberies and at least thirteen murders. The couple quickly became famous for their crimes which included a suspicion of killing two Joplin, Missouri policemen and the kidnapping of a couple in rural Louisiana. They later released the couple in the small town of Waldo, Texas.

Their crimes spread across Texas and into Oklahoma, New Mexico, and Louisiana where they robbed and killed numerous people including law officers.

The Texas Rangers commissioned Frank Hamer as Highway Patrol officer and then as a special investigator charged with tracking down Bonnie and Clyde. Hamer began a study of Barrow’s movements and found pattern of circling the
state and skirting along state borders to elude the law. Four other men, Manny Gault, Bob Alcorn, Ted Hinton and Prentiss Oakley joined Hamer in the final ambush in Louisiana that ended in the deaths of Bonnie and Clyde.


Here's a picture of the car after the ambush: 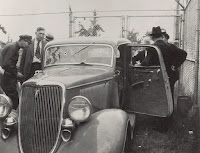 For more information about this infamous couple and their deaths, visit the website: https://www.thevintagenews.com

You can always visit the museum in Waco and see the artifacts, pictures, and stories of these men who protected our state.

Although the Rangers do not participate in confrontations today like that of Bonnie and Clyde, they are instrumental in helping to keep Texas’ roads and highways safer. Their patrol cars can be seen along every highway in Texas whether a State or Interstate, and they don’t hesitate in pulling over those who are exceeding the posted speed-limits.

In celebration of my 83rd birthday this month, I am giving away a copy of my novella: Lasso Around Her Heart. In the comment section, tell me about your best birthday so far. I'll announce the winner by the 15th.

Allie Logan promised her mother to take care of the family after her death, and she’s kept that promise for over five years, but now Jarrod Wright comes into her life and threatens that promise. When she learns her of her father’s attempts to arrange a marriage between her and Jarrod by offering him land, she shuts herself off from Jarrod only to find he’s already lassoed her heart. But how can she forgive her father for offering to pay a man to marry her and Jarrod for accepting the offer?