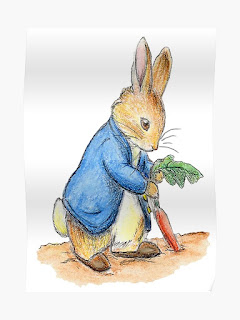 Helen Beatrix Potter, was born on July 28, 1866 in Kensington, London. She and her brother Bertram loved to draw and paint, making sketches of their many pets which included rabbits, mice, frogs, lizards, snakes and bats.

Although she never went to school, Beatrix’s parents encouraged her drawing by hiring an art teacher. Beatrix also had governesses, including Annie Moore, who became a lifelong friend.

Two of Beatrix’s earliest subjects were her pet rabbits. Her first rabbit was Benjamin Bouncer, who enjoyed buttered toast and went with the family on vacations, where he enjoyed taking walks on a leash. Her next rabbit was Peter Piper, who performed tricks and went with Beatrix everywhere.

Beatrix loved the summers her family spent in Scotland. She and Bertram explored the countryside where Beatrix observed and sketched plants and insects. When she was sixteen, her family stayed near Lake Windermere, and Beatrix developed a love for the Lake District.

Beatrix was fascinated with fungi and was invited to study it at the Royal Botanical Gardens. As a result, she produced beautifully detailed watercolors and became a skilled scientific illustrator. She even wrote her own theory of how fungi spores were reproduced, but the paper was not permitted to be presented to the noted plant society because women at the time were not allowed to do so.

Long before she was a published author, Beatrix drew illustrations for a greeting card publisher. She also drew a series of frog illustrations and verses for a popular art publisher.

Beatrix wrote many letters to Annie Moore’s children, telling and illustrating stories. She wanted to publish some of these stories in books but was rejected by several publishers. So Beatrix decided to publish The Tale of Peter Rabbit herself, printing an initial 250 copies for family and friends. The book’s instant success encouraged a publisher who had turned her down to reconsider. The newly-published book with color illustrations was published October 1902, and the book was an immediate bestseller. The next year, she published Tale of Squirrel Nutkin and The Tailor of Gloucester, and the rest of her books followed.

Beatrix was an innovative businesswoman and a pioneer in marketing her books. She designed and created the first Peter Rabbit doll herself in 1903, registering it immediately at the patent office, making Peter Rabbit the world’s oldest licensed literary character. She also created  tea sets, bedroom slippers, a Peter Rabbit board game, and Peter Rabbit and Jemima Puddle-duck painting books, determined that her merchandise be faithful to her original illustrations.

Beatrix and her editor at the publisher, Norman Warne, fell in love, but her parents opposed their relationship because he was not of her same social standing.  Despite their disapproval, Beatrix became engaged to Norman, but he died of leukemia only a month later.

After Norman died, Beatrix spent more time at the Lake District and bought Hill Top Farm, which would appear in many of her tales. A friendship developed with Hardwick Rawnsley, the founder of the National Trusts, who shared his passion for preserving the buildings and farms of the Lake District and protect them from developers. With the profits from her books and merchandise, Beatrix was able to purchase more property in the area. During this time, a relationship developed between her and William Heelis, the local solicitor who helped her with property dealings. They married in 1913 and lived in the Lake District until her death.

Beatrix bought fifteen farms in the area and took an active part caring for them. She also became a breeder of Herdwick sheep and was the first elected female president of the Herdwick Sheep Breeders’ Association.

When she died in 1943, Beatrix left over four thousand acres to the National Trust. In accordance with her wishes, Hill Top Farm was kept exactly as it had been when she lived in it and is now open to tourists.

Today, more than two million Beatrix Potter books are sold throughout the world annually, sharing their timeless stories for generation after generation.
Her books, her art, and her land preservation have left an extraordinary legacy.

Marilyn Turk’s roots are in the coastal South, raised in Louisiana, moved to Georgia, then retired to Florida. Calling herself a “literary archaeologist,” she loves to discover stories hidden in history. She is the author of two World War II novels, The Gilded Curse and Shadowed by a Spy, and the four-book Coastal Lights Legacy series set in 1800s Florida—Rebel Light, Revealing Light, Redeeming Light, and Rekindled Light—featuring lighthouse settings. Marilyn’s novella, “The Wrong Survivor,” is in the Great Lakes Lighthouse Brides collection, and “Love’s Cookin’ at the Cowboy Café,” will be in the November Crinoline Cowboys collection. She also writes for Daily Guideposts Devotions.
Marilyn is the director of the Blue Lake Christian Writers Retreat in Alabama, www.bluelakecwr.com.
Website: @http://pathwayheart.com   Email: marilynturkwriter@yahoo.com