How Evil Flourishes When Good Men Do Nothing

Last month, I shared how Hitler came to power and took dictatorial control of Germany in 1933, and I described the state of the Jews in Germany during the interwar period (WWI - WWII). Here's the link to the post if you missed it: "How Did Evil Men Take Power in Germany?" Today we will examine how Hitler and the Nazis gradually subjugated their opponents and the Jewish people prior to WWII.


In April of 1933, the German government sponsored a two-day boycott of Jewish businesses. Political opponents of the Nazis and all Jews who hadn’t fought in WWI were dismissed from civil service. New laws pushed Jews out of other government jobs, including Jewish doctors who worked in government-financed healthcare programs.

The three-million-men-strong, brown-shirted, street-fighting SA Stormtroopers, who’d been instrumental in bringing the Nazis to power, now threatened the party’s power and existence. Hitler’s close friend Ernst Röhm headed the SA. He and the other SA leaders were unhappy with Hitler’s slow implementation of the radical policies the Nazis had advocated from the beginning. Also, Röhm wanted Hitler to combine the Reichswehr, the German military, with the SA and replace the officer corps. The German military leaders fought back by threatening to topple the Nazi regime if the too-powerful SA wasn’t eliminated.

10,000 Jewish emigrants returned to Germany from neighboring
countries in 1935.

Violence against the Jews increased in Germany and Jewish businessmen were pressured to sell and leave. Jews who had previously immigrated from Poland were sent back; however, the Polish government didn't allow them to return and left them to fend for themselves in the frontier zone. An angry young Jewish man in Paris whose Polish parents resided in the frontier zone retaliated by shooting Ernst vom Rath, a German officer stationed at the German Embassy in Paris. The Nazis used this incident to accelerate Jewish persecution in Germany and Austria. 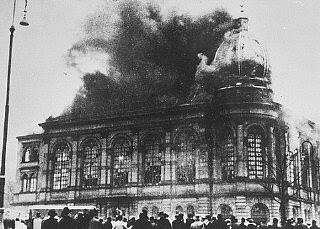