Herbs for cooking and Healing

This month I’m writing about herbs and their uses in both historic and present day times. Herbs are the fresh and dried leaves generally of temperate plants and are usually green in color.

Throughout the Bible we find references to herbs and their use. It is believed they were grown in the Garden of Eden and were highly prized for their medicinal qualities. Early Egyptians used herbs and spices to preserve their mummies.

The leafy green herbs run from the licorice flavor of anise of the parsley family to the pungent aroma of oregano. Plants like basil were even kept in the homes to bring the family happiness.

Unusual uses of herbs include using anise on the pillow to ward off bad dreams, bay leaves to bring good luck and ward off evil, laurel leaves to make wreaths to crown victors in Greece and Rome, and basil used as a symbol of love and fertility.

Herbs have been used for medicinal purposes since ancient times by the Chinese and Greeks. Evidence of use 5000 years ago has been found on a Sumerian clay slab from Nagpur and in Chinese writings at least 2500 years old. Even ancient Indian writing in their holy books mentions treatment with plants. Other ancient writings also include mentions of plants and herbs being used as medicine.

Those ancient remedies were said to cure coughs, headaches, fevers, parasites and pain. They were uses as diuretics as well as laxatives. As science progressed and new discoveries made, the use of herbs to treat ailments decreased. Antibiotics like penicillin began to take the place of herbs in healing. Herbs were and still are considered an important part of cooking, but looked upon as “old wives tales” for medicinal purposes. However, people still enjoy enjoy the soothing qualities of a cup of Chamomile or Peppermint tea today for their relaxing qualities.

The most common herbs still in use today will be found as living plants, dried, crushed or ground, in teas, and certain condiments.

Chamomile: A plant that resembles a daisy. Its leaves are dried and crushed and may be used as a sedative for anxiety or for relaxing. Europeans may still use it for wound healing and to reduce inflammation or swelling. Chamomile is used as a tea or applied as a compress. It is considered safe by the FDA, and may be considered an aid to fighting cancer. However, chamomile may interfere with the way the body uses some medicines. 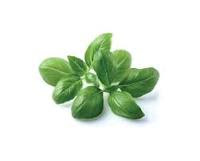 Basil: Also called great basil or Saint-Joseph's-wort. Basil is native to tropical regions from central Africa to Southeast Asia. It is a tender plant, and is used in cuisines worldwide. Basil is most commonly used fresh in recipes, but it can also be dried. A cook will generally add basil at the last minute because the flavor can be destroyed in cooking. Basil is one of the main ingredients in pesto—a green Italian oil-and-herb sauce.

Garlic: A pungent plant used to flavor many ethnic dishes. Medicinally, garlic is used for lowering cholesterol and blood pressure. Although studies today have shown hat it may cause small reductions in total HDL and LDL cholesterol, positive effects have been distorted. The FDA considers garlic safe, but it should no be used if a person is on warfarin because garlic may affect clotting.

Oregano: A flowering plant in the mint family. It is native to temperate Western and Southwestern Eurasia and the Mediterranean region. The flowers are purple, 3–4 mm long, produced in erect spikes. Most commonly used in Italian cuisine, its pungent flavor and aroma are best when dried and crushed.

Sage: Salvia officinalis is the scientific name for this plant, a perennial, evergreen subshrub, with woody stems, grayish leaves, and blue to purplish flowers. As a member of the mint family, it is native to the Mediterranean region. It’s most commonly used as a dried herb and is most familiar as a popular seasoning at Thanksgiving.

Thyme: Is any member of the genus Thymus of aromatic perennial evergreen herbs in the mint family Lamiaceae. Thymes are relatives of the oregano genus Origanum. They have culinary, medicinal, and ornamental uses. Although the leaves are available fresh, it usually dried and crushed to be used in most recipes.

Parsley: Parsley or garden parsley is a species of flowering plant that is native to the central Mediterranean region, but has naturalized elsewhere in Europe, and is widely cultivated as a herb, a spice, and a vegetable. We see it used fresh as a garnish and dried in stews to add flavor and a bit of color in cream cheese
spreads. 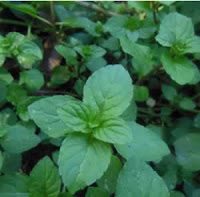 Peppermint: This aromatic herb is one of my favorites and is easily grown in most soils whether for herbs or not. It is used to flavor tea, hot chocolate, and even coffee. The leaves give off an aroma that can begin healing even before it is consumed. It is very good for colds, flu, and fever because it acts to relieve multiple symptoms at once. Because of its pleasing aroma, it a popular essential oil for and acts as a relaxant to ease pain and congestion and even to settle stomach problems.

Rosemary: With its pungent aroma, rosemary is a favorite herb of many cooks.

It is a perennial evergreen shrub. Although native to the Mediterranean area, it now grows widely in much of the world, particularly in warm, sunny climates. You’ll recognize rosemary by its long, spiky needles that are green on top and silvery underneath, as well as small, blue flowers. It is available as a fresh herb, as a dried whole herb, in oil, or dried in capsules. Its medicinal qualities range from relieving stress, improving memory, hair loss treatment, relief of aches and pains, improve memory loss and concentration, and to relieve indigestion and stomach distress.

Many other herbs are available and are said to have medicinal qualities dating back to ancient times. Be wary about using them for these purposes today and do more research before dropping prescribed medications and going the herbal route.

Martha Rogers is a multi-published author and writes a weekly devotional for ACFW. Since receiving her first novel contract at age 73, Martha has written and published over 50 books. Martha and her husband Rex live in Houston, Texas where they are active members of First Baptist Church. They are the parents of three sons and grandparents to eleven grandchildren and great-grandparents to five. Martha is a retired teacher with twenty-eight years teaching Home Economics and English at the secondary level and eight years at the college level supervising student teachers and teaching freshman English. She is the Director of the Texas Christian Writers Conference held in Houston in August each year, a member of ACFW, ACFW WOTS chapter in Houston, and a member of the writers’ group, Inspirational Writers Alive.
Find Martha at:  www.marthawrogers.com, www.hhhistory.com                           Twitter:  @martharogers2
Facebook: https://www.facebook.com/MarthaRogersAuthor