I've lived in Colorado ever since I was toddler. My grandparents worked in Estes Park, managing several cabin resorts over the years including MacGregor's, Indian Village, and Tiny Town. Suffice it to say, Rocky Mountain National Park became my playground, and it's still very special to me. I had no idea what all went into declaring a national park, or the struggles and feuds that took place. 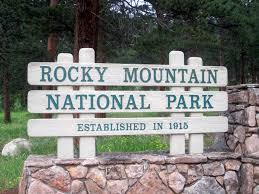 The first inhabitants: As far back as 10,000 B.C., Native Americans used the land for a seasonal hunting ground. Ute and Arapaho were the most prominent. 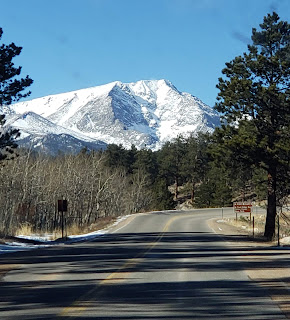 The first permanent residents: In 1860, with the promise of gold in Colorado, successful miner, Joel Estes, decided to try his pan in the higher elevation. Unfortunately, he and others who tried mining found that while the area was beautiful, it didn't have enough yield of any mineral to make a profit. However, Estes built a ranch for his family and lived in the valley for six years. They became the first permanent residents and thus the town of Estes Park was named by newspaper man, William Byers, owner and editor of The Rocky Mountain News. Estes left because he found the altitude at 7,522 feet above sea level difficult for farming and he sold his homestead to a Welshman, Griff Evans.

The first dude ranch: Griff Evans wasn't interested in farming, but saw the value of hospitality for those beginning to discover the pristine land. He built the first dude ranch and hosted many prominent historical figures.


The first thoroughly documented accounts of Rocky Mountain exploration: Another guest of Griff Evans was Isabella Bird, a world-renowned explorer, historian, and writer who traveled solo to the Rocky Mountains to see what everyone was talking about. She met Mountain Jim, a rough mountain man with a horrid scar, but apparently with a heart for the stately woman, and they became good friends. In 1873, together, they scaled the fourteener, Longs Peak. Just before her ascent, she wrote:


"Nature, rioting in her grandest mood, exclaimed in voices of grandeur, solitude, sublimity, beauty, and infinity, 'Lord, what is man that Thou are mindful of him? or the son of man, that Thou visitist him?'" Her experiences are published in the book, A Lady's Life in the Rocky Mountains. The first shuttle service: In 1903, F. O. Stanley, from Massachusetts, visited the Elkhorn Lodge seeking a cure for his tuberculosis. He, and his twin brother, F. E. Stanley established the Stanley Hotel and invented, among others, a means of transportation in the Stanley Steamer automobile. They would go on to create a nine-passenger Stanley bus and start the first shuttle service, bringing guests up from the Loveland train station.


The first greedy settler: One of those figures was Windham Thomas Wyndham-Quin, Earl of Dunravin. An Irishman, he didn't care about the historic value of this Colorado gem. He ended up acquiring the entire valley for his own private resort and hunting reserve. His unethical practices angered the other ranchers and mountain residents. Whether they encouraged his departure or he simply became bored is up for debate. He would eventually sell to F. O. Stanley and B. D. Sanborn in 1908.

The first luxury hotel: At a cost of a half-a-million dollars, the Stanley Hotel was established and the city grew exponentially. Soon, Estes Park felt a tourism boon that threatened wild life and the delicate ecosystem.

With the Stanley Hotel and working dude ranches becoming popular, by the early 1900s, Estes Park and the playground known today as Rocky Mountain National Park, had become overrun by tourists, some gentle on the land and others tramping all over and scarring the primordial mountains and forests, and depleting the wild life.

Enter Enos Mills, a naturalist who caught the eye of Stanley, now president of the Protection and Improvement Association. Mills was running the Longs Peak Inn at the time, and making known his naturalist views. Stanley funded Mills in his effort to campaign across the nation to bring awareness of the need to protect and preserve the Northern Rockies. Mills wanted to set aside 1000 square miles, encompassing the entire mountain range from Wyoming to Pikes Peak, for a national park. After numerous publications, speaking engagements, and countless photographs to prove his point, the lobbyist finally saw his dream come to fruition, albeit smaller than he had wanted at 325.5 square miles. William Byers, the newspaper man who had named Estes Park after the first resident, Joel Estes, also named Enos Mills the Father of Rocky Mountain National Park.

President Woodrow Wilson signed into effect the Rocky Mountain National Park Act on January 26, 1915, and the park was dedicated on September 4 of that same year.

During the fight for control over the land, two factions warred against each other. Those who wanted to keep the land open for ranching, lumber milling, and hunting. Others wanted to regulate the use of the land, keeping it pristine and untouched. In my story, "Periwinkle in the Park," a novella in the Barbour Romance Collection, A Bouquet of Brides, these two views clash as hiking guide, Periwinkle Winfield, and rancher, Clayton McCarrick, butt heads. She's

determined to help commission the national park, and he, for reasons of his own, doesn't want to have a thing to do with the government. Only one will win. Can they see past their differences and allow their hearts to talk to each other in the land they both love?