Thank you for joining us once again as we delve into the history of this great state, we call home. Oklahoma.

If in old westerns, you’ve always marveled at the modern techniques of 19th century medicine, the Oklahoma Frontier Drugstore Museum is for you. It’s a pharmacy student’s dreams, or a patient’s nightmare, depending on how you look at it.

Since 1992, the Oklahoma Frontier Drugstore Museum, located in the Gaffney Building in Guthrie, has provided visitors with a unique view of the evolution of the Drugstore and doctoring. This museum covers both the 19th and 20th centuries and allows a distinctive view of the drugstore’s evolution in the providing of the needed services we have come to value today.

But the history of the Drugstore museum didn’t just start in 1992. One of the people who made the April 22, 1889 land run was Forress B. Lillie. He established one of the first drug stores in the territory. His license from the territorial board of pharmacy before statehood, was the first license issued by the state board of pharmacy. In 1890, the Gaffney building was built and housed his drugstore. At some point, the building was owned by a Mrs. Ruby Tryon, a follow lover of history, who wanted to see another museum open in Guthrie and sold it to the Pharmacy Heritage foundation. One of the Museum’s treasure artifact is the first license issued, Mr. Lillie’s.

Included in this museum, there are numerous different examples that contributors have been gathering since the 1970’s. This includes numerous medical books, tools / devices (medicines, boxes, tins, one-fix-all elixirs) that will leave you asking how we survived to the modern age of medicine we live in today.


The Museum has several examples of the original soda “pop” bottles where the bottles were capped with a marble set in the opening with a string in wax, so when a person pulls the string and breaks the wax, they can hit the marble and “pop” the seal.
They even have an original soda fountain / Ice Cream Parlor display set up to show the visitors how Drug-Stores would have children of all ages, visit for their sweets as well. Quite often, the museum will have sarsaparillas and or cream soda you can buy and drink. 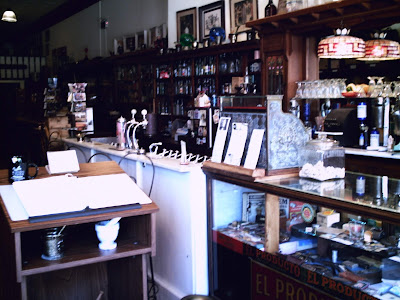 It even has a dentist’s office that looks more a like a medieval torture chamber somehow.

In the late fall of 2006, the museum added an apothecary garden in honor of their 25th anniversary of operation.

The Drugstore Museum also takes part in the yearly Victorian Walk that Guthrie holds for Christmas.

If you get the chance to tour the Historic Downtown of Guthrie, Oklahoma, we recommend you make a stop along the path to visit this wonderful site, and revel in its historic treasures they present. If you wish to find out more about this museum, you can visit them at https://www.drugmuseum.org.

Born and raised in Edmond, Oklahoma, Alanna Radle Rodriguez is the great-great granddaughter of one of the first pioneers to settle in Indian Territory. Judge was born and raised in Little Axe, Oklahoma, the son of A.F. Veterans. Judge and Alanna love the history of the state and relish in volunteering at the 1889 Territorial Schoolhouse in Edmond. Her second published story, part of a collaborative novella titled 18 Redbud Lane, is now available. Alanna and Judge live with her parents in the Edmond area. They are currently collaborating on a historical fiction series that takes place in pre-statehood Oklahoma.

Facebook.com/authorAlannaRadleRodriguez
Pinterest.com/alannaradlerodr/
Amazon
Posted by Alanna Radle Rodriguez at 12:30 AM