Take a peek at what 17th Century makeup was like!

Often when we think of the past, we picture women with plain, glowing faces. No makeup, no eye shadow, just fresh faces aglow with sunshine and fresh air. After all they didn’t have pollution back then, nor did they have chemicals and other additives put in their food, and most people ate fresh foods!  In some centuries and locations this was true, but I was shocked to discover that in the 17th and 18th centuries, women did, in fact, wear makeup. At least women in the higher classes.

White or pale skin was very much in fashion. The whiter the better. White skin 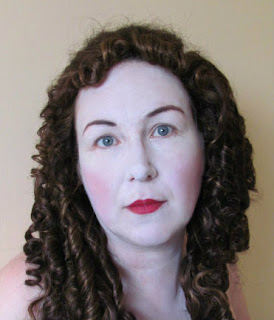 represented wealth and luxury while tanned skin meant you were a common laborer. How different from today!  In order to achieve the whitest look possible women put a paste on their faces made of a lead powder or chalk mixed with egg whites and vinegar.. The thicker the powder, the better. In fact often the powder would often crack if the lady dared to smile too wide or raise her brows. Can you imagine attending a party where you couldn’t express yourself for fear of cracking your face??

The cheeks were reddened by adding a little cerise powder (white lead to which red coloring was added), or by using Spanish paper which was bought dyed red to rub on the skin. Lips were reddened with fruit juice or cochineal.

However, the lead in the makeup and the inability for the skin to breathe over long periods of time, did incredible damage to the skin, and to the lady.  Many women are believed to have died of blood poisoning from the lead. In addition the use of these powders containing lead and mercury resulted in scars and blemishes. Here’s an actual report from a man who didn’t find the same woman he married in bed with him the next morning.

An unfortunate husband writes to the Spectator in 1711, asking, if it be the law that a man marrying a woman, and finding her not to be the woman he intended to marry, can have a separation, and whether his case does not come within the meaning of the statute. Not to keep you in suspense, he says; as for my dear, never man was so enamoured as I was of her fair forehead, neck, and arms, as well as the bright jet of her hair; but to my great astonishment, I find they were all the effect of art. Her skin is so tarnished with this practice, that when she first wakes in a morning, she scarce seems young enough to be the mother of her whom I carried to bed the night before. I shall take the liberty to part with her by the first opportunity, unless her father will make her portion suitable to her real, not her assumed countenance

Yet instead of ceasing to use the makeup, women began using patches to cover 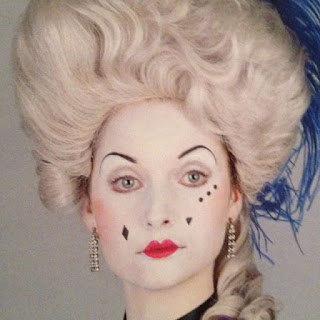 up the scars and blemished caused by the makeup. They also used them to cover up pock marks formed by the many outbreaks of small pox, and soon these patches became an integral part of the make-up of that time. They were normally made of silk or leather and were cut to form pictures of things like hearts, stars, diamonds, crescent moons and even a tiny coach and horses, birds in flight, sailing ships, and anything one’s imagination could conceive of.
Small boxes were made so that the fashionable person could carry extra patches, in case one fell off or a new look was desired.

The placement of these patches meant different things.

The earliest mention of the adoption of patching by the ladies of England, occurs in Bulwer's Artificial Changeling (1653). Our ladies, he complains, have lately entertained a vain custom of spotting their faces, out of an affectation of a mole, to set off their beauty, such as Venus had; and it is well if one black patch will serve to make their faces remarkable, for some fill their visages full of them, varied into all manner of shapes.

He gives a cut (which we copy) of a lady's face patched in the then fashionable style, of which it might well be sung:

'Her patches are of every cut,
For pimples and for scars;
Here’s all the wandering planets’ signs,
And some of the fixed stars.'

It is believed that the vaccination for smallpox, discovered in 1796, eventually led to the end of the fashion of wearing beauty patches.
Fascinating, huh?

I incorporate the use of patches and the language of love in my Award-winning novel, The Ransom. 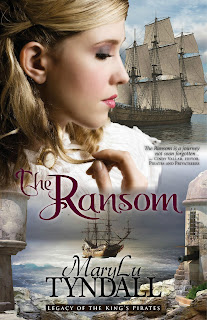 This is everything I love in a book - fast paced, witty, daring, romance.... Cannot wait to read more!! A must read!! Amos, book reviewer

The Ransom is a journey not soon forgotten. . . Cindy Vallar, editor Pirates and Privateers