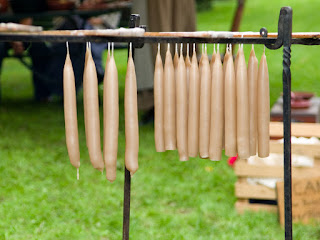 I will never forget the great Northeast blackout when I was eleven or so. It was an event that forever made me deeply appreciate Thomas Edison’s light bulb invention.

Doing my homework at my bedroom desk that long-ago November evening, the lights began to flicker. I thought it was just my lamp bulb, but when I walked out to the hallway, the light there was flickering as well. Within moments, everything was dark.
Those of us who were home already (it was about 5 p.m. on the East coast) scrambled to find every single candle we could find: Decorative pillars, wax Santa Claus figures, formal tapers—no vestige of paraffin and wick was safe from our discovery.
We lit up each candle and the wondrous feel of bygone days illuminated each corner of our 1860’s Massachusetts home. It was magical. And the best part was, I didn’t have to finish my homework because it was so dark!

What was a unique and inconvenient experience for my family that night was, of course, the norm in Colonial America. Candles then were a necessary commodity that provided the only source of illumination in homes that were not just dark—they were pitch dark. No outdoor street lights were around to help someone’s vision. The only other source of light was the hearth, which burned all day and night. 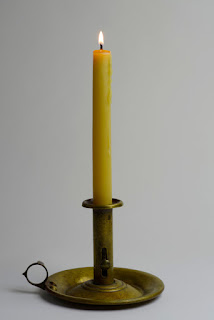 The very first in-house lighting in the northern and southern colonies was provided by pine knots (called candlewood) from fat pitch pine. These chunks of wood produced wonderful light but messy tar residue and a lot of smoke. Thus they were usually placed in the corner of the hearth on a flat stone. The saying was that a wise farmer would be better off starting out a winter without hay than a good supply of candlewood.

As the numbers of cattle increased in the colonies, farmers began saving the tallow residue from the animal fat to make candles. These waxy stalks were highly prized, not just for their usefulness but because of the difficulty in producing them in the first place.
The process of candle-making involved setting up two large kettles over the fire in the hearth. Fireplaces in Colonial homes were enormous, sometimes as long as eight feet.
Within each kettle they placed water and tallow, then candle rods were strung with long wicks for dipping into the heated mixture. It is said that the best tallow fat was a combination of both sheep and beef fat. As the wicks became coated with the blend, they were then set to dry on long poles set across two chairs or other support devices. To enlarge the candles, the coated wicks were alternately dipped and dried, until they were the proper size.
It was an all-day ordeal as the women transformed the bare wicks into the source of light that brought illumination through the long winter nights. The annual candle-dipping usually created about 400 tapers.
No wonder Colonial women used their candles sparingly.

In Jack Larkin’s The Reshaping of Everyday Life: 1790-1840, he describes illumination in the home:

During the day, Americans depended on direct sunlight entering through windows or open doors. They read, sewed, or did other close work near windows, and moved their tables and chairs to follow the sun around the house.
At night, most Americans walked in darkness between the flickering fire and the ‘feeble circle of light’ that Harriett Beecher Stowe remembered, made by “the dim gleam of a solitary tallow candle.”

Some colonists enjoyed the scent of bayberry candles. This required huge numbers of berries—about fifteen pounds of berries to make one pound of wax—and was impractical for most households. When the berries were boiled, a waxy substance floated to the top and was skimmed off. The wax often softened at high temperatures so did not keep well in summertime.
Keeping the candles safe from mice who were lured by the scent of fat, posed an additional problem. Many colonials used candle boxes high up on the wall to keep the critters out. And of course, mice-catching cats were also helpful in the cause.
One colonial home I toured in Massachusetts provided a cat door for the family feline to go out or come in at will. 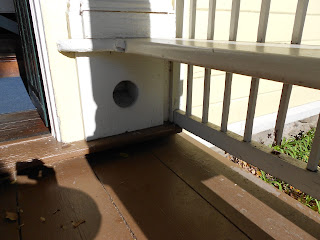 While today I love candles for the romantic atmosphere they create, Colonials regarded the soft light as a necessity and, at times, likely wished it was brighter for certain tasks like sewing.
But I’ll never forget the excitement of the Great Northeast blackout in my childhood. It transformed my home back to colonial times and made me both grateful for electricity, yet long for the serenity and simpler times of the past.

Elaine Marie Cooper has two historical fiction books that recently released: War’s Respite (Prequel novella) and Love’s Kindling. Love’s Kindling is available in both e-book and paperback. They are the first two books in the Dawn of America Series set in Revolutionary War Connecticut.

Cooper is the award-winning author of Fields of the Fatherless and Bethany’s Calendar. Her 2016 release (Saratoga Letters) was finalist in Historical Romance in both the Selah Awards and Next Generation Indie Book Awards. She penned the three-book Deer Run Saga and has been published in numerous magazines and anthologies including the 2019 Chicken Soup for the Soul. Scarred Vessels, a novel about black soldiers in the American Revolution, will release in 2020. You can visit her website/ blog at www.elainemariecooper.com