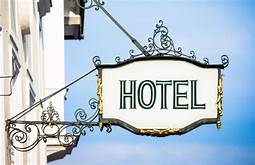 When we travel, we like to think that wherever we lay our head at night, we’ll be safe. Particularly when we’re in a strange city. However, in this spookiest of months, we’ll see that even the nicest hotels have their grisly secrets.

The St. James Hotel in Cimarron, New Mexico, has a storied past. Built in 1872 by a man who traveled west to find gold. When he didn’t, he went in search of riches through offering accommodations, food, and entertainment to local miners, ranchers, and businessmen. Henry Lambert, owner and proprietor, was notorious for living the fast and loose life, and encouraged folks to settle their arguments with a gun. Many famous and infamous gunmen of the late 1870s and 1880s stayed here, including Wyatt Earp and his brothers, Buffalo Bill Cody, Annie Oakley, and Jesse James. A famous saying in the town was, “Who got shot at Lambert’s last night?”

When the hotel was renovated in 1901, many bullet holes were found. The only thing separating the customers sleeping upstairs from certain death was a double layer of hard wood. Even today, evidence of the Wild West days can still be seen in the dining room ceiling: twenty bullet holes.

The notorious “WAC Murder” of 1943 in the Indianapolis Claypool Hotel has never been solved. Maoma Ridings, serving as a corporal in the Women’s Army Corps, went on leave on August 29th and checked into the Claypool. She’d told friends she had a date scheduled. Around 8:00 p.m. that evening, a housekeeper went into the room to turn down the bed, and found Ridings’ body on the bed. Subsequent investigations revealed there was less than forty cents in Maoma’s purse, which wouldn’t cover the cost of the room, so robbery was the presumed motive.


However, a bellboy reported delivering ice to the room around five that evening, and he noted a woman dressed in black sitting on the bed when Ridings answered the door. This was the last sighting of Ridings before her death.


Ridings was no stranger to this hotel. Whenever she had leave, she checked in, then spent the weekend partying. There were several reports of her being seen with a woman dressed in black in the months prior to her death, but no identification has ever been made.

And on a spooky note, while police were investigating the murder in the room, the telephone rang. When they answered, the caller hung up. Upon further investigation, they identified this person as the man she was waiting for. However, his alibi panned out and he was never formally charged. The case remains unsolved.


Thomas (Fatty) Walsh died in March 1929 after checking into the Coral Gables Biltmore in Florida. He’d gotten into a fight earlier in the day with the hotel manager, Eddie Wilson, who shot him to death in the middle of the casino. The manager was never charged, and corrupt law enforcement officials allegedly helped him escape to Cuba.

Perhaps because Fatty was gunned down and nobody ever convicted for the crime, stories of his spirit haunting the hotel are many, and most involve the 13th floor suite. Elevators travel there unbid. In one case, a couple hit the button for the fourth floor but ended up at the 13th instead. When the woman, thinking it was her floor, stepped out, the doors slid shut and returned her male companion to the lobby. She reported hearing unexplained sounds and smelling cigar smoke in the otherwise empty room.

And on a spooky, non-violent note, La Posada de Santa Fe Resort & Spa, an historic hotel in New Mexico’s capital, has a ghostly story of its own.

The original owners, the Staab family, lived here in 1882. The couple had seven children, were popular in social circles, and wealthy. However, when their eighth child died shortly after birth, Julia fell into a deep depression. She had several more unsuccessful pregnancies, becoming more withdrawn, finally spending her remaining years in self-imposed exile in her bedroom, where she died in 1896 at the age of 52.

When the Staab House was sold and converted into a hotel, Julia’s former bedroom became Room 256. And while it appears Julia was dead, she hadn’t completely left the hotel. Various sightings of her in more recent years have scared staff, and voices have been heard when the room is empty. Perhaps one of the strangest reports is the telephone ringing in the room, even though the line has been disconnected.

Julia’s ghost has also been spotted in the dining room, and reports of glasses being knocked off shelves and unexplained gusts of wind blowing out candles. To this day, La Posada is still considered one of the most infamous haunted hotels in the US.

And finally, The Crescent Hotel in Eureka Springs, Arkansas, is considered the most haunted hotel in America. Reminiscent of the “Hotel California” song from the 70s, guests checked in but never left.

At least, not under their own steam.

However, in most cases, there was no disappearance, no unsolved mystery, and no murder. One of the spirits still haunting the hotel is that of an Irish stonemason named Michael, who died while building the hotel in 1885. Theodora, a cancer patient at the hotel when it was a hospital, died a natural death. She is reported to roam the hotel looking for her room key. And Norman Baker, attired in a white suit and lavender shirt, travels the halls as he probably did while alive.

All in all, while many spooky stories abound, hotels are no different than other structures when it comes to numbers of murders and reported ghostly sightings. They simply seem to attract more stories of horror and murder a la “The Shining” of Stanley Hotel, Estes Park, Colorado, fame.


But have no fear. You are no more likely to be killed—or to mysteriously disappear—in a hotel than you are from anywhere else.

Giveaway: Leave a comment, and I will randomly draw a name to win a print copy (US only) or ebook version of The Mystery of Christmas Inn, Colorado.

Donna lives in Denver with husband Patrick. As a hybrid author, she writes historical suspense under her own name, and contemporary suspense under her alter ego of Leeann Betts, and has been published more than 30 times in novellas and full-length novels. She is a member of American Christian Fiction Writers, Writers on the Rock, Sisters In Crime, and Christian Authors Network; facilitates a critique group; and teaches writing classes. Donna also ghostwrites, edits, and judges in writing contests. She loves history and research, and travels extensively for both. Donna is represented by Terrie Wolf of AKA Literary Management.