Clothing: Is it Garb, a Costume, or Cosplay?

Thank you for joining us once again as we delve into the history of this great state, we call home: Oklahoma.

For the last several months, we have been delving into the history of several buildings in Guthrie. This month, we will take a short break from the norm, and I will explain why, later. As we have both been freely open with, we work at the Edmond’s 1889 Territorial Schoolhouse, as guides to visitors. We are their resident “Living History Re-enactors.” What is that you ask? Why, we dress in garb, tell whoever asks about the climate of the town of Summit, Indian Territory, now Edmond. Mind you, this is not just climate as far as the weather, but is socio-political and historical as well.

There’s that word again. Garb. What IS this “garb” we keep mentioning? Well, as defined by most historians, garb is the clothing worn by others during their time period. Now, that’s not to say we raided a museum, but we made our own clothing by using materials they had back then, and methods that have survived since. Before you ask, yes, our clothing was sewn on a treadle sewing machine, and our footwear is hand-stitched.

So, what’s the difference between garb and costumes? Garb is using the same materials, the same methods and even, according to some groups, the same amount of time as making the clothing as they did back in the day. Costumes are clothing INSPIRED by a time-frame, or event. This is not to say that costumes are any less effective in story-telling, but that there is something to keep it from being garb. Most of the times, it is a difference in the materials and methods, like using rayon instead of muslin, and being made on a modern-day sewing machine.

Some groups refuse to accept not having made your own material as your outfit being a costume. They are commonly insist on the perfection of the clothing, before they tend to accept the person as being a living history re-enactor.

Then you have cosplay. This is a term that has been bandied about for the last number of years. What is it, you ask? Cosplay is a combination term of costume and play. This type of outfit is an artistic expression of something. This could be a character in a popular t.v. show, or possibly a movie, or a book. This type of an outfit is only limited by your imagination and resources.

For anyone that is looking at making or buying an outfit of any type, we always recommend you keep three things in mind.

1. Know your audience. You can’t get away with cosplay in a group of re-enactors, unless it was previously set up.

2. Know your history. Make sure you know the difference if you are wearing a costume, garb, or cosplay.

3. Know what you yourself want. If you look at buying garb, or even making it yourself, remember it is YOUR outfit, not to be completely defined by someone else. That is not to say others can’t influence your decisions, but that YOU need to be final authority of what it is you want. Each group, each region, each person has their own definitions. Times change along with language.

We hope you have enjoyed this article on the differences between the types of outfitting.

OH! Almost forgot. Why, you ask, the change from the normal routine? That is because we celebrate our 5th anniversary today in the place that we wed. We did an article about the historical wedding and the historical traditions we did, you are more than welcome to click here and read it. We are working at the Territorial Schoolhouse today between 1 and 4 p.m and invite anyone to come along for a rousing discussion of history and clothing. 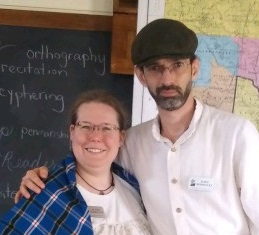 Born and raised in Edmond, Oklahoma, Alanna Radle Rodriguez is the great-great-granddaughter of one of the first pioneers to settle in Indian Territory. Judge was born and raised in Little Axe, Oklahoma, the son of A.F. Veterans. Judge and Alanna love the history of the state and relish in volunteering at the 1889 Territorial Schoolhouse in Edmond. Her second published story, part of a collaborative novella titled 18 Redbud Lane, is now available. Alanna and Judge live with her parents in the Edmond area. They are currently collaborating on a historical fiction series that takes place in pre-statehood Oklahoma.