True Stories of the Orphan Train

I’m in the process of deciding which book idea I want to write next. One of those is an Orphan Train story. That got me to wondering if I could find some true stories of children who were “placed out” via the Orphan Train. I found a bunch, but I’m only sharing a few today.

Between 1859 and 1921, somewhere close to 200,000 children were part of an experiment called “placing out,” started by Charles Loring Brace. Trains left big cities like New York and Boston with groups of youngsters who were sent to the Midwest in hopes of finding a good home for orphans who had once lived on the streets. Some were lucky and found happy homes, but many children were taken in simply because a farmer or businessman needed additional help. For those children, life was difficult. Here are a few of their stories:

Charles Frederick was a six-year-old orphaned German boy who didn’t speak English. After taking the train to Rockford, Illinois, he and several other children were loaded into a covered wagon by John Nelson, a farmer, and driven to Durand. There, the children were divvied up. Charles went to the Lennon family. He later told his son that he worked hard on the Lennon farm and occasionally got to attend school, but he never felt loved. At age 17, Charles told the Lennons he was going to the outhouse, but instead, he grabbed the sack of clothes he’d previously tossed out the window and took off running. He never returned. He got a job working for farmers then later moved to Rockford, where he met his wife. He held various jobs. In 1960, he moved his family to California. He died at the age of 80 in 1962. 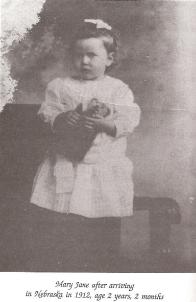 A fourteen-year-old boy named Frank told his widowed mother that he wanted a little sister with blue eyes and brown hair. Just a month later, Mary Jane Baade joined the family. Mary Jane was only 26 months old when she rode the Orphan Train. She had been placed in a Catholic institution when she was only two weeks old. The nuns stitched clothing for the children in their care from bed sheets.

“When I got off the train, my brother was looking for me,” Mary Jane said.

“There she is!” she heard Frank yell. And from that day forward she was, at last, part of a family. Frank and his mother, Adelaide, took the little girl home to St. Libory, where Frank carried his little sister everywhere.

“They were such wonderful times,” she said.

Mary Jane was one of the lucky ones who had been chosen ahead of time. She didn’t have to stand in line and be poked and prodded by prospective parents.
Arkansas

Cliff and Myrtle Jennings were born in Brooklyn, New York. They lived in a comfortable home with a father who was an electrician and their mother, who was a homemaker. When Myrtle was five, her father died. Although they had wealthy grandparents, two years later, they ended up in the Home for the Destitute in Brooklyn. A 1910 census showed that the brother and sister were “inmates” at a Brooklyn industrial school. They were just nine and ten then. Because the boys and girls were separated, the siblings only saw one another through a hole in a wooden fence. The places they lived were rough, and the children were often punished.

Three years later, the Children’s Aid Society found a home for the siblings in Wheeler, Arkansas. The started their Orphan Train ride on February 27, 1912. Although Cliff was nearly two years older, he and Myrtle were about the same size. The belief by officials that they might be twins is what kept them from being separated.

Ben Shreaves and his wife took in the siblings. While Ben was kind, his wife wasn’t, and she punished Cliff and Myrtle harshly. They felt more like unpaid servants than family. They were eventually settled with a different family who was kind and loving.

At the request of her grandparents, Myrtle later returned to New York. Her reunion with her mother was disappointing. After her grandparents' death, she returned to the Midwest and lived with the P.C. Morgan family. Morgan was the agent who rode West with her and Cliff on the Orphan Train. Myrtle married his son. They moved to Oklahoma, but during the Dust Bowl years, they relocated to California.

Cliff also married and made his home in Mounds, Oklahoma. He and his wife, Lola, had two sons. In 1984, he died in Tulsa. Although they faced hardships, both Myrtle and Cliff were grateful for the chance to create a new life, thanks to the Orphan Train. 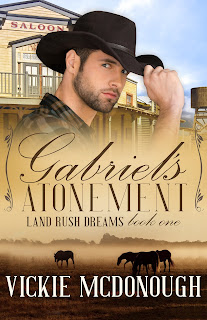 Gabriel Coulter lived a comfortable life as a successful gambler, but a confrontation with a disgruntled cowboy leads to a family man dying in Gabe's arms. Though it was self-defense, the only way Gabe knows to get rid of his guilt is to return the money he won to the man’s wife.

Lara Talbot sees Gabe as a derelict like her husband and wants nothing to do with him--not even the much-needed money he's offered her. But as she struggles to provide for her family and makes plans to claim property in the upcoming Oklahoma land rush, she wonders if God might have sent the meddling man to help. 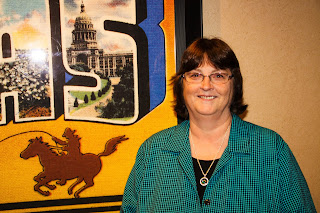 Vickie McDonough is the best-selling author of 50 books and novellas. Vickie grew up wanting to marry a rancher, but instead, she married a computer geek who is scared of horses. She now lives out her dreams penning romance stories about ranchers, cowboys, lawmen, and others living in the Old West. Vickie’s books have won numerous awards including the Booksellers Best and the Inspirational Choice awards. When she’s not writing, Vickie enjoys reading, doing stained glass projects, gardening watching movies, and traveling. To learn more about Vickie’s books or to sign up for her newsletter, visit her website: www.vickiemcdonough.com
Posted by Vickie McDonough at 12:30 AM