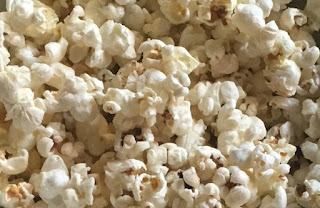 Mmm! Popcorn! Can you smell it? Can you hear it?

October is National Popcorn month. Americans consume 17 billion quarts of popcorn a year and rising, with the average American eating forty-three quarts. We grow and consume more popcorn than other countries.

Several pieces of popped corn are called popcorn, but a single piece is called a kernel. When a kernel is popped it is called a flake. Popcorn bursts into two general styles of flakes, mushrooms (ball shaped) and butterflies (irregular with several protruding “wings”).
But where did popcorn come from? When did people fall in love with this tasty treat?

I think of popcorn as more of a modern commodity. That man engineered it from regular corn. But not so. People have been popping corn for millennia. Popcorn could be the world’s oldest snack food.

Pre-Columbian indigenous people domesticated the popcorn variety of maize by 5,000 BC.

The oldest known popcorn is 4,000-5,600 years old. In 1948 and 1950, ears of popcorn were discovered in the Bat Cave of west central New Mexico. In the coastal deserts of North Chile, popcorn found in burial grounds was so well preserved that it still popped after 1,000 years. So what is with our wimpy short expiration dates? 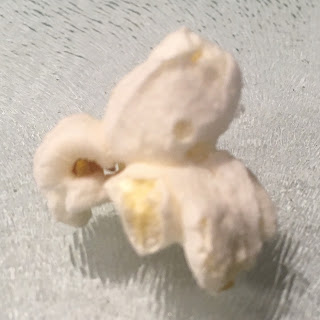 Over 2,500 years ago (or earlier according to the Bat Cave find), popcorn made its way to the American Southwest but wasn’t found growing east of the Mississippi until the early 1800s due to agricultural limitations.

In the 16th century, popcorn was integral in the Aztec culture. Besides a great food source, it was used in ceremonies, decorations for ceremonial headdresses, necklaces, and ornaments on the statues of their gods.

As colonists came to the New World, they adopted the indigenous people’s popular snack food. The natives likely brought it to the first Thanksgiving. Colonists also made popcorn with molasses creating something similar to kettle corn. Not only was popcorn made at home in the 1800s, but it was sold at general stores, at concession stands, at circuses, and at carnivals.

In the late nineteenth and early twentieth centuries, popcorn was a popular breakfast food. Much like our cold cereals that we pour milk on, people used to pour milk or cream and sugar on their popcorn and eat it with a spoon. (I don’t think I would like this as I don’t care for soggy popcorn.) Also at this time, popcorn balls were a highly popular confection, given as gifts and used to decorate fireplace mantels, doorways, and Christmas trees. By the turn of the century, most cookbooks had at least one recipe.

With talking pictures solidifying the presence of movie theaters in the 1920s, a lot of theater owners refused to sell popcorn as it was too messy. But industrious popcorn venders sold popcorn in nearby shops and on the street to movie goers as they went into the theater. Soon some of the theaters installed popcorn popping machines. Theaters who didn’t went out of business.

During the Great Depression, a bag of popcorn at five-to-ten-cents a bag was one of the few luxuries a down-and-out family could afford. While other businesses failed in the 1930s, popcorn boomed. Or should I say exploded?

With sugar being sent overseas during WWII, there wasn’t much of it left at home, and so three times more popcorn was eaten than before. When televisions became popular in the 1950s, people went to the theaters less and popcorn consumption dropped. A resurgence occurred when people started cooking popcorn at home and eating it in front of their TVs.

Early on in my research, I ran across popcorn on the cob! How cool! I had to get me some and try it. 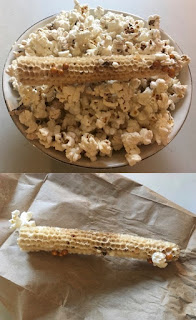 Though it had minimal flavor, it did taste good. I did burn some of it. It seemed to have popped some of the kernels right away, then slowed down, and popped vigorously. I think those initial ones are the ones that burned. =0(

So I figured if the ear popped dry, why couldn’t I put regular popcorn in the bag and throw it in the microwave. It worked! I still burned some. =0(

Then I made some popcorn the tradition way in a pot on the stove.

And again, I burned a few. I think I try too hard to get every kernel to pop, that I don’t take it off or out of the heat soon enough.

I know the dry popcorn is probably better for me, but there is something about oil that adds to the flavor. The oil also helps to stick the salt to the flakes.


Remember the air poppers that popped the corn while dry and then we added butter. It always seemed silly to swap one oil for another. Then in the early 1980s came microwave popcorn.

Which do you prefer? Stovetop or microwave popcorn? Do you have a favorite specialty flavor? I loved Cracker Jacks as a kid.