This is the second installment of a series I’m doing on historic French chateaux. Since many of Europe’s medieval wars were fought in France, the country has a seemingly endless supply of these richly historic structures. And what could possibly be more picturesque and romantic than a castle? These imposing, sometimes extravagant fortifications are the stuff of legends—and romance novels. In fact, Book 6 of my American Patriot Series, Refiner’s Fire, is partially set in 18th century France, where my heroine lives for a time in a chateau, so naturally I ended up digging more deeply into the subject.

The French word château has a wider meaning than the English word castle. Forts, palaces, mansions, and even vineyards can be included in this category. For the purposes of my story, however, I focused on actual castles and palaces. Today we’re taking a look at the famous Château de Roquetaillade.

Roquetaillade means carved out of rock and refers to the troglodyte caves beneath the castle. The château is the most visited castle in France’s Bordeaux region. Its enclosure surrounds two impressive stone castles, the oldest built by Charlemagne as a timber motte and bailey castle in the 10th century while his army was on the march to the Pyrenees. Over time this old castle was rebuilt in stone, but today only the imposing ruins remain of what was a bleak fortress with walls pierced mainly by arrow loops, with few windows.

In 1306, with the permission of the English King Edward I, Cardinal de la Mothe, the nephew of Pope Clement V built a second fortress, le Château Neuf, which was square in design with six towers and a central keep. The same family has resided there ever since, though the occupants have had five changes in surnames because the property was often passed down to daughters.

The fortress underwent a major renovation in the 17th century. The first story arrow loops were replaced with Renaissance windows, the battlements were more elegantly reconstructed while remaining functional, and the interior was redesigned for greater beauty. The family survived the terrors of the French Revolution, and in 1864 owner Louis le Blanc commissioned the famed architect Eugene Viollet le Duc to redecorate the castle again and make it more liveable. He created the chateau’s extraordinary interior decorations including a magnificent staircase and elegant bedrooms. According to one travel site, the stone masons who worked on the castle placed a secret message under one of the columns in the front hall: a carved monkey, eating a piece of fruit. Supposedly that was a sign to other workers that they would be treated fairly and paid well by the owners. If the monkey had been portrayed scratching his back, it would have offered a warning that this was not a good place to work! 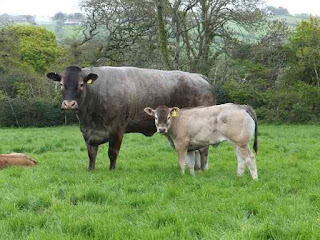 The château’s park includes remains of the medieval curtain wall with the barbican, the Pesquey stream and its banks, the 19th century chalet, and the Crampet pigeon loft. The current owner, the Vicomte Sébastien de Baritault du Carpia, his wife Rosalind, and their family, actively maintain and promote the castle, which has been open to the public since 1956. The chateau produces a famous white wine, Chateaufort de Roquetaillade, and Bazadais cattle, shown at right, are bred there. The castle has also been used as a location in several films and in 1976 was named a monument historique by the French Ministry of Culture.

Do you have a favorite novel—or nonfiction book—that involves castles? One of mine is Ivanhoe by Sir Walter Scott. Please share your favorite and what appealed to you most about the story.

Also be sure to check out the brief video below featuring the property’s current owner and lovely shots of the  castle’s interior!

~~~
J. M. Hochstetler is the daughter of Mennonite farmers and a lifelong student of history. She is a professional editor, a publisher, and the author of award-winning historical fiction whose books have been endorsed by bestselling authors such as Lori Benton, Laura Frantz, Jocelyn Green, Michelle Moran, and MaryLu Tyndal. Her American Patriot Series is the only comprehensive historical fiction series on the American Revolution. She is also the author of One Holy Night, which won the Christian Small Publishers 2009 Book of the Year and co-authored the award-winning Northkill Amish Series with Bob Hostetler. Her latest release is Refiner’s Fire, Book 6 of the American Patriot Series. 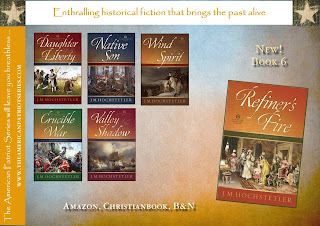