Landmarks of the Oregon Trail

On November 1, my very first published novella collection—The Oregon Trail Romance Collection—got a second print run. So I’m revisiting my research on the Oregon Trail for a bit, and I thought it would be fun to share some of the major landmarks on this 2,170-mile trail.

Known as the “Queen City of the Trails,” Independence was the official starting point for the Santa Fe, Oregon, and California Trails. Within Independence, there were many blacksmiths, wheelwrights, livestock traders, and mercantiles where would-be travelers could buy all that was needed for the long journey west. According to some resources, these businesses operated around the clock since the demand was so great for travelers to lay in the stores they’d need for the arduous journey. Can you imagine the clang of hammer, the sound of saws, the belligerent arguing of livestock traders as these would-be emigrants bought, sold, and traded at all hours of the day and night? During the height of the Oregon Trail’s popularity, it must have been a rollicking place!

Able to be seen for a good 50 miles before reaching them, these two large rock formations appear as one from a distance. As such, travelers sometimes called them “The Lonely Tower.” However, as they drew closer, emigrants on the trail realized they were two separate formations. Because one looked like an important government building, people called it “The Courthouse”—and the other became known as “The Jail.” Eventually, those names evolved into “Courthouse Rock” and “Jail Rock.” Sitting more than 4000 feet above sea level, they are the first sizeable rock formations travelers would come to on the trail. 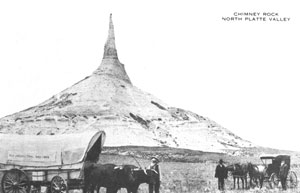 This iconic rock formation has a large cone-shaped base with a 325-foot-tall spire at its top. Of the many landmarks along the Oregon, California, and Mormon trails, this one is the most mentioned in a study of over 300 diaries and journals written by emigrants. It was known by several names: Chimley Rock, Elk Peak, or Chimney Tower, but “Chimney Rock” was the one that stuck. 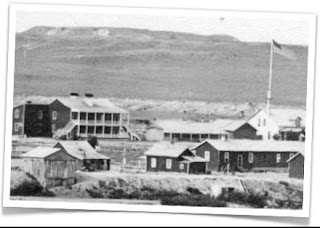 This fort began in the 1830s as a fur trading outpost. As time went on and the beaver population thinned, the traders at the post began trading with the Sioux and other tribes for buffalo robes. In 1849, the Army offered to buy this privately-owned post in order to keep a military presence along the westward trails. With this change, it expanded from a 80’x100’ space into a major military garrison, which included stables, powder magazine, bakery, barracks for both officers and enlisted, a guardhouse, and more. Over the years, it served also served as a stage stop, a Pony Express stop, and a telegraph station.

Several military campaigns were launched from Fort Laramie during the Indian Wars. One significant Indian conflict, which I wrote about in my story, Sioux Summer (part of the Oregon Trail Romance Collection) was the Grattan Massacre. The garrison also hosted different treaty negotiations with the Indians, as well.

Travelers along the westward trails looked forward to arriving at Fort Laramie for the opportunity to restock their dwindling supplies, as well as feel a touch of civilization after some six weeks of hard travel across the lonely wilderness. 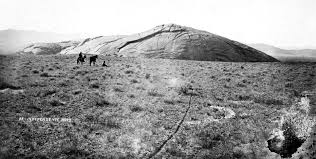 At 1,900 feet long, 700 feet wide, and 130 feet tall, this massive rock formation was described by emigrant J. Goldsborough Bruff like this in 1849: “reached Independence Rock . . . at a distance looks like a huge whale. It is being painted & marked every way, all over, with names, dates, initials, &c - so that it was with difficulty I could find a place to inscribe it.” 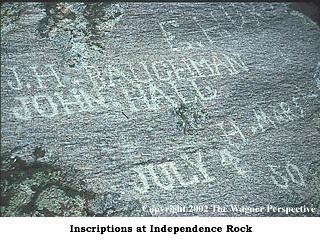 Independence Rock in order to inscribe their names and messages for those coming after them—or to look for messages inscribed by family and friends who’d gone before.

This fort was another that originally began as a fur trading post in the early 1840s. Later, it was taken over briefly by the Mormons. There was much conflict over who owned it until the government settled the argument and made it an Army garrison by 1858.

After the experience of Fort Laramie, many expected Fort Bridger to be similar. However, Fort Bridger was a much smaller and less well-stocked outpost. Some complained that it was little more than a few barely habitable log cabins and a miserable supply of trade goods.

On their way west, travelers ran into a picturesque area that contained any number of natural hot springs. Of course, water was always at a premium, so they were thankful for the sight. And having hot water already prepared for washing laundry was a plus.

Emigrant Sarah White Smith wrote of the area in mid-1838: “Traveled . . . along the bank of the bear river & are encamped at Soda Springs. This is indeed a curiosity. The water tastes like soda water, especially artificially prepared. The water is bubbling and foaming like boiling water. I drank of it. . . . We find it excellent for baking bread, no preparation of water is necessary. Take it from the fountain & the bread is as light as any prepared with yeast.”

As time went on, a whole town grew up in the area, aptly named “Soda Springs.”

This trading post came about when Nathaniel Jarvis Wyeth took a shipment of supplies west to sell to the Rocky Mountain Fur Company upon an agreement he’d made with that company the year before. However, when he arrived with the agreed-upon supplies in 1834, the Rocky Mountain Fur Company was in financial difficulties and refused to take the shipment. So, Wyeth traveled some miles beyond and set up this trading post in order to sell the supplies. Wyeth was eventually driven out of business when the Hudson Bay Company set up a competitive trading post only a short distance away: Fort Boise. It remained in British hands until a treaty was signed between the United States and Britain for the Oregon Country south of the 49th parallel.

As stated above, Fort Boise was created by Hudson Bay Company in 1834 to compete with Wyeth’s Fort Hall. Because of its huge size and deep pockets, the Hudson Bay Company was able to undercut the prices quoted by Wyeth’s Fort Hall, thus driving him to sell out. Boise operated in its original location from 1834-1854, but finally shut down after severe flooding and an increase in fighting with the Native American tribes. Only a short portion of those ten years were under British rule, since the treaty transferred both Fort Hall and Fort Boise into American hands.

In 1836, Methodist missionaries went west to preach the Gospel to the Native American tribes. Among this group was Marcus and Narcissa Whitman, who set up the Whitman Mission. Tensions between the Whitmans and the Cayuse tribe were tense at first, but eased when Marcus proved he was interested in learning the Cayuse language. He made it clear that he wanted the Indians to learn white man’s ways as well. The ease in tensions lasted only until larger and larger numbers of white travelers made their way across the Oregon Trail from 1843-1847. Then, suspicions grew in the Cayuse hearts again, fearing the white man was coming to take over their land. When measles broke out in 1847, half the Cayuse tribe died from the unfamiliar disease. Since the whites had been more exposed to measles, fewer of them died of the disease, alarming the Cayuse. The surviving Cayuse Indians rode in, killed the Whitmans and eleven others of their party, as well as took forty-seven mission residents hostage.

Here, the wagon train emigrants would depart the land for rafts large enough to float their wagon, team, and families on. The river was calm in places, and in other spots, it reached different degrees of rapids. As you might imagine, this was a risky proposition. So, over time, an alternate route, the Barlow Toll Road, was created. This toll road circled around Mount Hood, adding some distance to the trip but saving the more faint of heart from having to navigate the river on rafts. 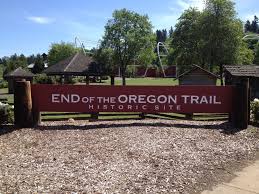 The travelers made it! Oregon City was a town originally set up by Hudson Bay Company in 1829, and this became the mecca for Oregon Trail travelers to file land claims.

It’s Your Turn: Have you visited any of these locations? Are there any you want to see? What do you think it would have been like to be a traveler on the Oregon Trail as you reached one of these major landmarks on the journey west?

Jennifer Uhlarik discovered the western genre as a pre-teen when she swiped the only “horse” book she found on her older brother’s bookshelf. A new love was born. Across the next ten years, she devoured Louis L’Amour westerns and fell in love with the genre. In college at the University of Tampa, she began penning her own story of the Old West. Armed with a B.A. in writing, she has finaled and won in numerous writing competitions, and been on the ECPA best-seller list several times. In addition to writing, she has held jobs as a private business owner, a schoolteacher, a marketing director, and her favorite—a full-time homemaker. Jennifer is active in American Christian Fiction Writers, Women Writing the West, and is a lifetime member of the Florida Writers Association. She lives near Tampa, Florida, with her husband, college-aged son, and four fur children

Nine romantic adventures take readers along for a ride on the Oregon Trail where daily challenges force travelers to evaluate the things that are most precious to them—including love. Enjoy the trip through a fascinating part of history through the eyes of remarkably strong characters who stop at famous landmarks along the way. Watch as their faith is strengthened and as love is born despite unique circumstances. Discover where the journey ends for each of nine couples.