Thanksgiving Then and Now
by Martha Rogers

For most families, Thanksgiving is a time to come together for good food and good fellowship. Every family has its own traditions. Some of those have been passed down for generations, and some are made new as the family expands and grows.

It’s a holiday that is celebrated in many cultures as a time of giving thanks for a bountiful harvest. Both Canada and the United States celebrate a Thanksgiving Holiday on the North American continent. 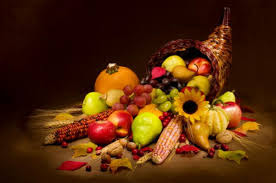 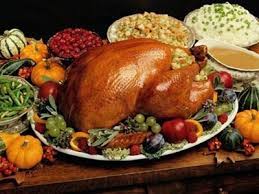 The Colors of the Season 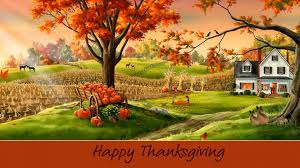 The history of our holiday is based both on legend and fact. The legend has our Pilgrims in the state of Massachusetts being the first to celebrate a harvest after a harsh winter in 1620-21 when they had so little food. During the spring of 1621, it is said that the Wampanoag Iroquois Indians taught the Pilgrims how to grow corn and other crops and how to hunt and fish. 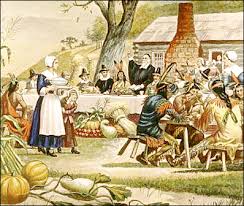 Traditions that stem from that celebration include the foods from the harvest such as corn, barley, beans, cranberries, squash, and pumpkin as well as deer, turkey, and other wild game. The Pilgrims and the Indians came together and celebrated with a large feast.

In 1789, George Washington suggested a date to observe a day of thanksgiving for the nation on November 26 and call it Thanksgiving Day. Later presidents were not so keen on the idea because it seemed to be a religious holiday and violated the separation of church and state. Because of this, only two presidents, John Adams and James Madison were the only two to proclaim a day of thanksgiving.

As early as 1846, the editor of Godey’s magazine published editorials which encouraged readers to celebrate what she called the “Great American Festival” in hopes it would unite the country and avert a war among the states.

In 1863, in the midst of a civil war of such magnitude and severity that it tore our nation apart, Lincoln asked all Americans to set aside the last Thursday of November as a day of giving thanks.

Here is an excerpt from that speech:
“It has seemed to me fit and proper that these gifts should be solemnly, reverently, and gratefully acknowledged as with one heart and voice by the whole American people; I do, therefore, invite my fellow-citizens in every part of the United States, and also those who are at sea, and those who are sojourning in foreign lands, to set apart and observe the last Thursday of November next as a Day of Thanksgiving and a Prayer to our beneficent Father who dwelleth in the heavens.” (Abraham Lincoln, October 3,1863) 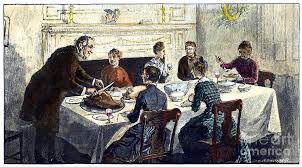 had received in the previous year.

After that, it became a yearly celebration, and from those early days many traditions have evolved. Family traditions abound from the kind of dressing to be served and the kind of meat with which it is served to the activities planned for the day. Some families use the holiday as a time for family reunions that spread across generations while other may only include the immediate family. 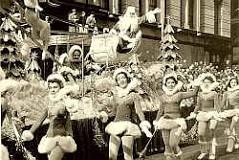 One tradition that seems to be enjoyed by a great many people judged by the crowds which attend them, is that of the Thanksgiving Day Parade. Macy’s parade in New York began in 1924 and is the best known one today. It was immortalized in the film Miracle on 34th Street. Now, many other cities across our nation have similar parades attended by young and old alike.

Football has also become a tradition dating back to the early days of television in the 1950’s and even earlier on radio. College rivalries made for great games enjoyed by those who attended in person or watched on the screen of their television sets.

This is a picture of my own table ready for Thanksgiving 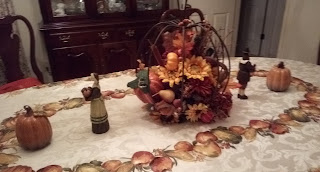 No matter where you live, or how large or small your family is, Thanksgiving is most likely celebrated at your home or the home of a relative. It is indeed, a day to reflect on and give thanks for God’s great blessings of the past year.

This month, in honor of the holiday, I’m giving away a copy of my novella, Thanksgiving in the Valley. Leave a comment below to tell me about one of your Thanksgiving family traditions to be entered in a drawing for the book, either paperback or e-book. Be sure to leave your email address as well, so I can contact you.

From our house to yours: 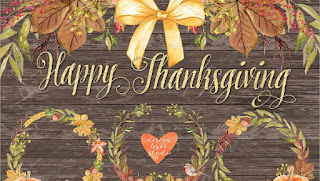 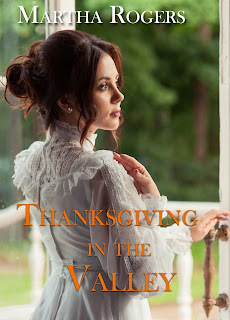 Travis fell in love with Violet when she was fourteen. Now, ten years later, he returns to Ridgewood Valley as a lawman and still loves her. Violet has always loved Travis and when he returns from serving in the U.S. Cavalry, her love
grows. Because she’s a preacher’s daughter, and he has less than stellar reputation while in the cavalry, he doesn’t feel worthy of Violet’s love and tries to avoid her. A few days before Thanksgiving, while he is away on a man hunt, Violet is shot during an attempted robbery of the church’s offerings. When Travis returns to town and learns of Violet’s injuries, he realizes he can’t live without her. Will this Thanksgiving Day be one of great blessings for these two hearts?

Martha Rogers is a multi-published author and writes a weekly devotional for ACFW. Since receiving her first novel contract at age 73, Martha has written and published over 50 books. Martha and her husband Rex live in Houston, Texas where they are active members of First Baptist Church. They are the parents of three sons and grandparents to eleven grandchildren and great-grandparents to five. Martha is a retired teacher with twenty-eight years teaching Home Economics and English at the secondary level and eight years at the college level supervising student teachers and teaching freshman English. She is the Director of the Texas Christian Writers Conference held in Houston in August each year, a member of ACFW, ACFW WOTS chapter in Houston, and a member of the writers’ group, Inspirational Writers Alive.
Find Martha at:  www.marthawrogers.com, www.hhhistory.com                   Twitter:  @martharogers2
Facebook: https://www.facebook.com/MarthaRogersAuthor