Last month, I shared about the world-wide impact and influence of the British Empire over the past 500 years or so.  If you missed that post, you can read it here: https://www.hhhistory.com/2019/10/the-sun-never-sets-on.html.

Earlier this month, my husband and I went out to see The Current War in the theater. Initially, I hadn't heard anything about the movie, so my husband showed me the trailer. As soon as I realized it was about the competition between Edison and Westinghouse to be the first to provide America with electricity, I wanted to see the film. Seeing Martin Scorcese directed and Benedict Cumberbatch starred intrigued me even more.

The Industrial Revolution period was an exciting time in history. There were some amazing and brilliant minds who pushed the limits, burning candles at both ends in order to share their life-changing inventions with the world. I've done a lot of research for this period, but somehow I completely missed the name Westinghouse in everything I read. Thomas Edison was always forefront in all accounts of the light bulb and providing electric light to the masses. 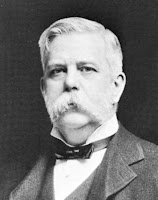 The movie (based on a compilation of facts) brought George Westinghouse to center stage. It also showcased Nikola Tesla, and his futuristic mindset. The Tesla name I know because there's a historical marker in downtown Colorado Springs (where I live) designating the site of Nikola Tesla's famed and now long-gone laboratory. 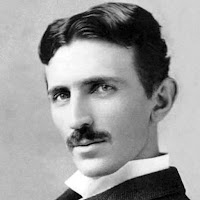 The lab was built in 1899 and used for his study of the use of high-voltage, high-frequency electricity in wireless power transmission. Although Edison and Westinghouse focused on wires and filaments to power their light bulb inventions, Tesla proposed the idea of electricity *without* wires. Hmm...wireless electricity. Today? Of course! But in 1899?

I also learned of the name Tesla thanks to Elon Musk, who named his modern-day electric car in honor of the legacy Tesla left. Although Tesla's mind attracted interest from Westinghouse in the competition with Edison, Tesla was a man ahead of his time. Thomas Edison's focus was on the direct current (DC) supplying the necessary energy, and Tesla proposed the alternating current (AC) as another option. Serbian-born Tesla arrived in the United States in 1884 with almost nothing but the clothes on his back, and he landed a job working for Edison. However, his ideas were quickly dismissed by Edison, who chose to pursue his own methods.

George Westinghouse learned of Tesla, and because he wanted to beat Edison so badly, he sought out Tesla and proposed a partnership. That joint effort resulted in Westinghouse winning the bid to "light up" the Chicago World's Fair in 1893, leaving Edison to shift his focus over to other inventions that also had worldwide impact. Although Edison didn't invent electricity or the light bulb, he *did* understand it enough to make it all work together successfully. He was also the type of man and business tycoon who didn't allow much to get in his way, and that's why his name resonates today, having gone down in history as a shrewd businessman and astounding inventor. 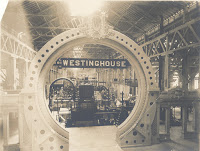 Despite the initial investment from Westinghouse that resulted in a partnership with Tesla, the contributions to the Chicago World's Fair ended up being Tesla's biggest claim to fame...and Westinghouse got the credit. Unable to profit from his inventions, Tesla died a poor man in his hotel room, and his name disappeared from history...until Elon Musk. I encourage you to research more about Nikola Tesla and the extraordinary ideas he held. The world likely wasn't ready at the time for everything he proposed, but imagine what life would have been like if the world *had* been ready.

* What other inventions did Thomas Edison create that are still in use today?

* What items in your home have the Westinghouse label on them?

* Name one thing in your life that is improved because of electricity.

Leave answers to these questions or any comments on the post below. Come back on the 9th of November for my next appearance.

She lives with her husband and fellow author, Stuart Vaughn Stockton, along with their two children and three dogs in Colorado. She has sold twenty (21) books so far and is represented by Tamela Hancock Murray of the Steve Laube Agency. You can find her on Facebook and GoodReads.
Posted by Tiffany Amber Stockton at 1:00 AM