The Pilgrims and Our Spiritual Roots

Thanksgiving dinner is my favorite meal of the year. There’s nothing like the traditional turkey, dressing, and pumpkin pie to make my mouth water!

This holiday takes on added meaning for me as well, because my ancestors arrived on the Mayflower nearly 400 years ago. So when we share food with loved ones while thanking our God Who has provided the abundance, we are recreating the spiritual roots and grateful attitude of the Pilgrims who knew their survival depended on the Almighty.
Our family tradition in my home has been allowing each member to voice what they are grateful for in the last year. Sometimes the answers are amusing, sometimes incredibly heartwarming. 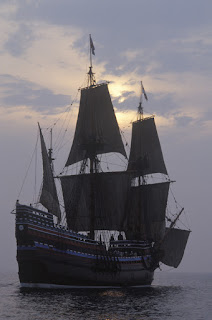 While we understand that the First Thanksgiving was celebrated here by the Mayflower survivors along with the Native Americans who helped them, the first official proclamation that was decreed to celebrate such a holiday was in 1777. It was a recommendation to the thirteen states by the Continental Congress to set aside December 18th that year as a “solemn thanksgiving” to celebrate the first major victory for the Continental troops in the American Revolution: the Battle of Saratoga.
The Battle of Saratoga has significant interest for my own family since one of my ancestors was a soldier there. But he was not on the American side—he was a British Redcoat. After surrendering to the Americans, he escaped the line of prisoners and somehow made his way to Massachusetts and into the life and heart of my fourth great-grandmother.
This family story was the inspiration for my Deer Run Saga that begins in 1777. 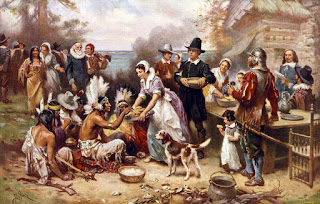 Some may wonder why such detail was afforded this holiday in my novels set in Massachusetts, while Christmas is barely mentioned. The reason is simple: Thanksgiving was the major holiday in the New England colonies, with Christmas considered nothing more special than a workday. It was also considered a “papist” (i.e. Catholic) holiday.
According to Jack Larkin in his book, The Reshaping of Everyday Life, “The Puritan founders of New England and the Quaker settlers of Pennsylvania had deliberately abolished (holidays) as unscriptural.”
But Thanksgiving was begun as a way to give thanks to God for His provision. It usually began with attending church services in the morning, followed by an elaborate feast in the afternoon. The food for this meal was prepared for weeks in advance. 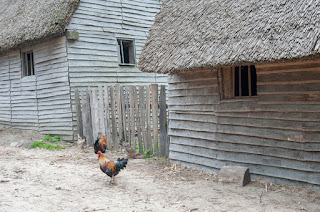 Since the individual state governors chose their own date to celebrate the holiday, it was theoretically possible for some family members—if they lived in close proximity—to celebrate multiple Thanksgiving meals with family and friends across state borders. The dates chosen could be anywhere from October to December, according to Dennis Picard, former Director of the Storrowton Village Museum in West Springfield, Massachusetts.
Chicken was most commonly served, said Picard, as it was readily available in the barnyard. And the oldest woman in the home had the honor of slicing the fowl for dinner.
Pies were made well in advance of the holiday and stored and became frozen in dresser drawers in unheated rooms.
“I like the idea of pulling out a dresser drawer for, say, a clean pair of socks, and finding mince pies,” said Picard, tongue in cheek.
Indeed.
I hope your Thanksgiving was blessed!!

Elaine Marie Cooper has two historical fiction books that released in 2019: War’s Respite(Prequel novella) and Love’s Kindling. Love’s Kindling is available in both e-book and paperback. They are the first two books in the Dawn of America Series set in Revolutionary War Connecticut. Cooper is the award-winning author of Fields of the Fatherless and Bethany’s Calendar. Her 2016 release (Saratoga Letters) was finalist in Historical Romance in both the Selah Awards and Next Generation Indie Book Awards. She penned the three-book Deer Run Saga and has been published in numerous magazines and anthologies including the recent Chicken Soup for the Soul: Think Positive, Live Happy. Scarred Vessels, a novel about black soldiers in the American Revolution, will release in 2020. You can visit her website/ blog at www.elainemariecooper.com

Posted by Elaine Marie Cooper at 12:30 AM