Santa Claus Around the World 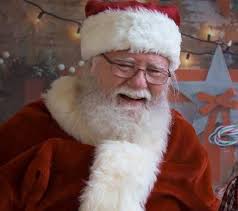 Santa is one of those Christmas traditions and legends to resonate around the world. The image of Santa brings up wonderful childhood memories of the jolly old man with white hair and beard dressed in a red suit trimmed in white fur.

The legend of Santa dates back to the third century to a saint known as St. Nicholas, the patron saint of children. He was born in Patara in what is now modern day Turkey where he is now known as Noel Baba. He traveled the country giving away his wealth to the poor and needy. His popularity spread and he became known as the protector of children. Even after the Protestant Reformation, he remained in his position and evolved into the Santa we know today. 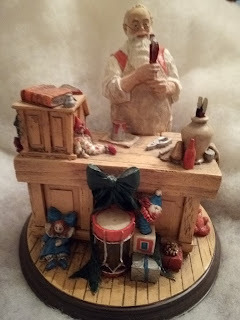 Santa in his workshop

However, the red suit trimmed in fur is not his only look. Countries around the world have their own names and clothing for Santa, and that makes him even more intriguing. 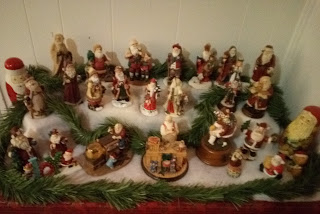 Some are nearly 60 years old and others are more recent as I've collected them over the years.

Our version of Santa is derived from Sinnterklaas, the man they celebrate in Holland. Here is how he looks to the children in the Netherlands.

The names for Santa Claus vary from country to country. Here are a few.
English: Santa Claus, Father Christmas or Kris Kringle which comes from the German word Christkind (Christ Child)

This Santa travels the world in a sleigh pulled by reindeer. He wears the red suit trimmed in fur. He comes down the chimney (if you have one) sometime between the later hours of Christmas Eve and early Christmas morning. He leaves toys under the tree for the children living in the home. One American tradition has the children leaving milk and cookies as a snack for Santa. In England the snack is a mince pie with a glass of sherry for Santa and carrots for his reindeer.

France: Here he is Pere or Papa Noel which means Father Christmas. In France he arrives sometime between December 23 and 25. A man in a dark suit is said to accompany him so he can punish the children who misbehave. 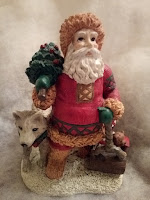 Canada dresses him a little differently, but he is still Papa Noel accompanied by his Husky dog.

Spanish: Various Spanish speaking countries have different traditions regarding Santa. In Spain he is Papa Noel and delivers his gifts sometime on December 24th or 25th, or he may wait until January 6, for the Three Kings.

In South America, a family member may dress as Father Noel and hand out gifts while the children try to guess which family member is dressed as Papa Noel. In countries like Mexico and Venezuela, presents might also be brought by El Niñito Dios (baby Jesus) or Santo Clós (Santa Claus).

Germany: This is the most difficult to pronounce: Weihnachtsmann. (The Christmas Man) In parts of Germany, Christmas starts early on Nikolastag or St. Nicolas Day, on December 6. St. Nicholas comes in the night, and puts presents in the children’s shoes, which are usually polished and placed by their front doors the evening before.

Some parts of the country believe the gifts are brought by das Christkind (Christ child) on Christmas Eve. Children also write to him asking for presents before Christmas. They might even use sugar to decorate those envelopes.

Other parts Germany look to der Weihnachtsmann (Santa Claus) as he one who brings the presents. When gifts are opened, it is on Christmas Eve rather than Christmas Day.

Russia: Here he is known as Dedt Moroz. Unlike our Santa, he delivers gifts to New Year’s parties.

Hungary: Children set out their boots on the window sill to be filled with treats by Mikulas. Naughty children will receive a wooden spoon or a willow switch left by one of the mischievous elves.

Other Versions of Santa: 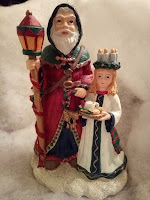 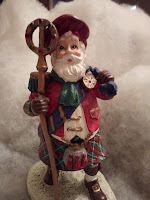 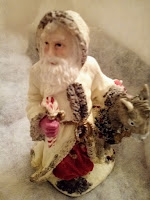 No matter where you may live, a version of Santa will find you. His legend has grown throughout the years, and movies and magical stories makes us almost believe he is real.

DRAWING FOR CHRISTMAS BOOK
Last month, we had no winner, so I'm adding the names from there to this month in a give-away of my new Christmas novella, Legacy of Love. Leave a comment and your email address and your name will be in the drawing. Here's the question to answer in comments:

What is one of your favorite family traditions at Christmas.