Before Pinterest was even a thing, my parents came up with a unique idea for a large picture over the sofa. Mom found some material at the local fabric store that depicted a snowy country rural scene with houses and barns, leafless trees, horses, wooden fences, and a flurry of activity. These comprise the work entitled, Early Springtime on the Farm, painted by Grandma Moses in 1945.

I remember my parents laying the fabric over an old kitchen table we kept downstairs for craft projects and gift wrapping. Over the next few days, perhaps even a month, my family would take glitter and glue it on parts of the print. Red glitter for a red jacket, green glitter for a tree, white for snow, etc. They’d work on it in passing, letting the glue dry in between dabs. What emerged was a unique piece of art that was then matted and encased in a glassed-in wooden frame. This 24 x 46 masterpiece hung in our living room for a couple of decades. It now hangs over my sofa. 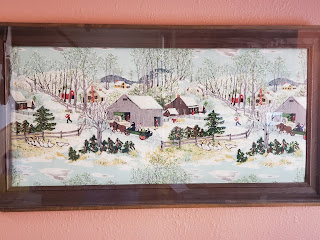 Anna Mary Robertson was born in Greenwich, New York on September 7, 1860. As one of ten children on her parents’ farm, she left home at age twelve to work for a neighbor. She eventually met and married Thomas Moses in 1887 and the two settled into rural life in Virginia’s Shenandoah Valley. There, they raised five children, but lost another five in infancy.

The couple moved their family to a farm in Eagle Bridge, New York, but it wouldn’t be until thirteen years later, at the age of fifty-eight, that she would attempt her first painting on a fireboard in her home. Even then, she never pursued art as a career until much later after her beloved husband died. To help with her grief, she would often lose herself in her art, painting scenes of the country living she remembered on the farm. From snowy Christmas scenes to green and earthy summer depictions, she declared her desire to paint “so people will know how we used to live.”

By the mid-1930s, when she was in her seventies, she had become fully invested in her art. Some of her pieces hung in a local store where an art collector, Louis J. Caldor, liked them and bought them all. From there, her paintings went on to be displayed at the Museum of Art in New York and became a prominent feature at Gimbel’s Department Store.

A decade later, her paintings were printed on greeting cards, where even more people could appreciate and come to love the self-taught artist. At the age of 89, she won the Women’s National Press Club award for her artistic achievement which she received from President Harry Truman. By the end of her career, she had created approximately 1500 works of art.
On her 100th birthday, New York governor Nelson Rockefeller declared September 7, 1960 as Grandma Moses Day. She passed away after her 101st birthday. 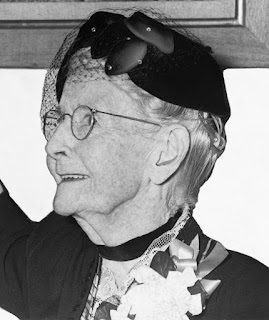 From farm girl to farm wife to treasured artist, Grandma Moses went on to become a world-renowned name in American folklore.

*All images attributed to Wikimedia Commons unless otherwise noted.