Howdy again, everyone! Welcome to 2020. As this new year starts, I’m looking forward to the upcoming release of my eleventh title, Blacksmith Brides, a 4-in-1 novella collection coming on May 1. The other authors include Amanda Barratt, Angela K. Couch, and Pegg Thomas.

In my story, A Malleable Heart, the hard-hearted town blacksmith falls in love with the town’s laundress. While I don’t spend a great deal of time in the story in the heroine’s job of doing other people’s laundry, I did research that job to find out just what it entailed. (Can I just say that I’m THRILLED to be living in this era with my nice washing machine and dryer? LOL)

So how did one get clothes clean in the days before such “new-fangled contraptions”? 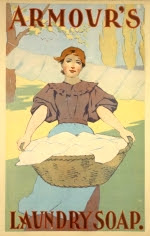 If the families didn’t have store-bought soap available to them, they’d have to make their own. That was a long process, which started with gathering the wood ashes out of their fireplace, soaking them to get “lye water”, then rendering beef fat to get tallow. Boiling the lye and tallow together in a cast-iron pot made a liquid that could be poured into molds to create soap. Once the mixture was almost fully hardened, it would be removed from the molds and cut into bars or cakes. These would then be left in the sun to finish the hardening process. Most people would make huge batches of lye soap at once, so that they would have to go through that laborious process only a few times a year.

Most of the domestic guides seemed to recommend women do their washing on Monday. However, the process started days ahead of the actual washing.

On Saturdays, the laundry was gathered, sorted, and mended. Any rips or tears were sewn, socks darned, and the like. On Sundays, the clothing was then soaked overnight in warm water, often with a bit of soap or other cleaning agents like soda or lye.

Once Monday arrived, the real work began. Women would rise early, gather a great amount of fuel for their fire, and haul many gallons of water to fill their wash, soak, and rinse tubs. From here, they would go through the following steps:

·       Wash the clothes right side out, including applying soap and scrubbing on a washboard. Wring to get excess water out.
·       Wash the clothes inside out, including applying soap and scrubbing again on the washboard. Wring.
·       Boil the clothes and linens in soapy water, agitating them with long sticks. Wring again.
·       Rinse the clothing in fresh, clean water to remove all traces of the lye soap. Wring once more.
·       Dry on a clothesline, the nearest bush, or even laid flat in the grass.

In addition to the above steps, it was also necessary to “blue” the laundry to counteract the yellow hue that came with age, laundering, and wear. One would use a bluing agent, easily purchased in stores in the later 1800s (and still available today, just as an FYI). A bit of blue dye would be added to the water. When used properly, the amount of blue was negligible enough you wouldn’t stain your clothing blue, but it would cause the eye to see less of the yellow and, instead, see more white. What a nifty trick, right?

Some domestic guides mentioned bleaching agents as well. Ammonia worked well for flannels. Buttermilk or turpentine for cotton, and chloride of lime for muslins.

Once the washing and drying was done, the process wasn’t over. Oh, no. Then came the starching and ironing. Sometimes, the bluing stage was part of the starching process, but not always. Starch would be mixed with water, the clean, dry clothing submerged in the concoction, and then wrung out again. Once the garment was almost dry, a “sadiron” would be heated on the stove until super-hot, and then applied to the garment to remove the wrinkles. Typically, a home would have two irons so that one could be heating while the other was being used, so that no time was lost while the iron heated again.

After all this, the clothing would be neatly folded and put away.

I can’t begin to imagine how much work this would be, particularly when you factor in that many families in that day had an average of five or six children. It was no wonder why a family might hire a town laundress to do their washing, just to save the hours of backbreaking work each week.

It’s your turn: Were you aware of all the steps it took to wash clothes in the 1800s? What is the most surprising part of this process?

A Malleable Heart by Jennifer Uhlarik
(California—1870) A hard-hearted blacksmith finds acceptance with the town laundress. But when his past comes to call, will he resist love’s softening or allow God to hammer his ruined life into something of worth?