What causes revivals? What is their Purpose?


The Merriam-Webster Dictionary defines revival as an act or instance of reviving or the state of being revived such as a renewed attention to or interest in something, a new presentation or publication of something old, or a period of renewed religious interest—often highly emotional evangelistic meeting or series of meetings. 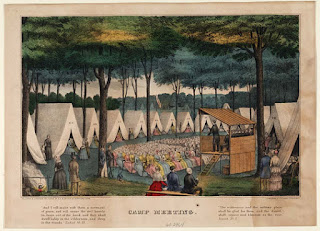 Referred to as the Second Great Awakening, the period beginning in 1820s began in the Protestant churches—Baptist and Methodist preachers leading the charge. By the late 1840s it had peaked.

Those revivals brought in literally millions of folks to the existing congregations and new denominations began. Many reform movements to remove the evils in society were also established, getting everyone ready for the second coming of Christ. 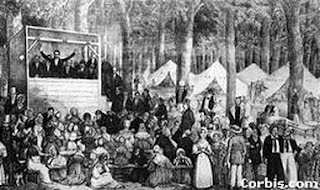 Though hosted by different denominations, the revivals looked very much alike, embracing more enthusiasm and emotions, leaning toward the supernatural.

Revivals proved the most effective way to reach the people, especially across the western frontier.

Steadily losing members, a Dutch Reformed congregation in lower Manhattan hired a missionary to reverse the trend with a hearty visitation program, but it failed. So, in 1857 he rented a hall on Fulton Street in New York City and advertised prayer meetings.

“For the eyes of the Lord are over the righteous, and his ears are open unto their prayers: but the face of the Lord is against them that do evil.” 1 Peter 3:12

Only six men showed up for the first prayer meeting on September 23, and the Bank of Philadelphia failed two days later. They began coming together daily to pray, and soon after the stock market crashed.

“For who has despised the day of small things?” Zechariah 4:10a

That panic triggered a religious awakening, and the people began flocking to the prayer meetings. Within six months, ten thousand prayers assembled themselves together daily in New York City alone.

Ships carried news of the happenings to British ports and revival broke out there. Soon after Ireland experienced a prayer meeting revival, too, with crowds growing so in numbers, they met in the open air. 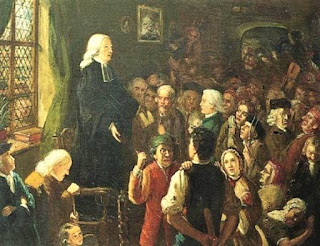 When John Cairns preached in Belfast in the Spring of 1859, he’d never experienced such an eagerness for the Good News or lives so transformed. He said, "Nature does not contain any epidemic so like to Christian conversion."

Hearing about Ireland’s awakening, Andrew Bonar increased his petitions to God for revival in Scotland. His diary of July 3, 1859 reads:

"Again this night, in sorrow of heart over the terrible carelessness, indifference, deadness of this 'valley of dry bones.' O my God, come over to Scotland and help us!"

Two months later, he found himself in the midst of revival. On September 10th he noted: "This has been a remarkable week: every day I have heard of some soul saved among us..." 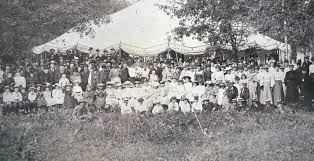 The names of great men connected to the revival proved absent. Rather, the prime instruments God used to awaken the people were simple lay folk, praying. The preaching—in many areas, dead and too intellectual—began concentrating on the truths of Christ’s gospel and His cross. 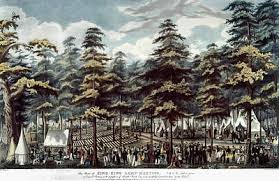 The ‘afterglow’ of the 1859 revival lasted for decades in the areas of evangelism, missions, and social action. That’s when many who’d been deeply touched became Christian leaders, during that second half of the nineteenth century.

Perhaps the reason for revival is to get a people spiritually ready to face tragedy. So had the 1859 revival similarly affected America? Did it serve to prepare the North and the South spiritually to survive the horrors coming? 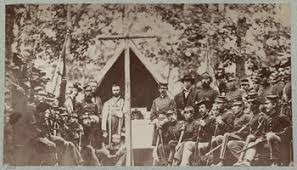 The awakening continued into the Civil War period, a great revival occurring in the Southern armies in 1863-64.

By the mid-1860s, the Civil War was in full swing, pitching brothers against brothers, and revival broke out.

During those awful days, hopelessness and despair fell on the citizens—North and South. Hardships, trials, and tribulations drive people to God Who hears their prayers and sends Holy Spirit to revive them.

The country was at a low point then, spiritually, politically, and financially. And what did they do? They went to their knees and beseeched God for a respite. Prayer meetings spread across the country.

The answer came—at least in part—in the form of revival . . . instigated by prayer to prepare His people. We've answered our questions.

Have you ever been to a tent meeting?

My Texas Romance Family Saga series required lots of research as one of my main three families----the Nightingales----went the way of preaching tent revivals for several generations: MIGHTY TO SAVE (Nathaniel Nightingale, book nine), CHIEF OF SINNERS (Nathaniel and Buddy, book ten) then the Companion Books, The Revivalist Trilogy books one and two JOHN DAVID'S CALLING and HANNAH CLAIRE'S WILDERNESS (John David Nightingale).

Its ten novels cover from 1832 through to 1951 then the series' Companion Books carry on through 1972 (so far). There are six Companion Books of the families' ancestors and descendants.

I hope you have the opportunity to read them and experience the essence of nineteenth-century revivals and camp meetings through my characters' eyes.

Bio:
Caryl McAdoo, a hybrid Christian author (published traditionally—including Simon and Schuster—and independently), nears fifty published titles in her series, praying her story gives God glory. The award-winning, best-selling author spends much of her non-writing time navigating the Indie marketplace! She and husband of fifty-plus-years share four children and eighteen grandsugars. They live in Clarksville, Texas, seat of Red River County, waiting expectantly for God to open the next door.