The Ancient Practice of the New Year's Resolution 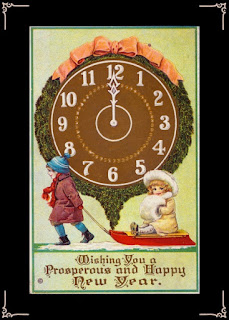 ‘Tis the season for shedding old habits and resolve to make oneself a better person. My peers are currently discussing writing goals, but when asked about mine, I duck faster than my thirteen-year-old self during a round of junior high dodge ball. In my plethora of decades on this earth, I can count on one hand how many resolutions I’ve kept. My intentions were always pure. They included the popular promises of most Americans. Eat right. Exercise. Curb my scented candle obsession. Okay, that last one might be just me.


At any rate, what are the origins of this practice? When were the first human beings guilted...er...prompted to change their lifestyles and set themselves up for failure?

As with many traditions, this one has its roots in pagan Babylon. Their unwritten calendar began in March, but the concept was similar. Make promises. Appease the gods by paying their debts and returning objects they borrowed. Go back to doing what they’re destined to do. Rinse. Repeat. In medieval times, knights would make a Peacock Vow by placing their hands on either a live or a roasted peacock and vowing to remain chivalrous throughout the new year, thus upholding their values. My guess is they went to a cooked bird after a knight lost a hand to an aggressive beak.

By 46 B.C., Julius Caesar declared January 1 as the beginning of the new year, paying homage to the Roman two-faced god Janus. With one face looking behind, and the other looking forward, it seemed fitting that he would symbolize looking back to the old year and looking forward to the new. The Romans made sacrifices to this god and promised good conduct in the future.

The New Year Resolution took on various forms of redemption as Christians decided to forego the debauchery rampant with revelry. By 1740, John Wesley, the founder of the Methodist church,
created the Covenant Renewal Service or Watch Night Service as it came to be commonly called. Late at night on New Year’s Eve, the congregants read scripture, sang hymns and prayed for the coming year. They confessed past sins and resolved to be better moving forward.

Don’t get me wrong. I applaud anyone who wants to better themselves. But for me, I know my limitations. And my resolve. I like the idea of the early Christians praying for the coming year. Only God can make me a better person. But some people enjoy making that yearly resolution, and some will reach that goal. How about you? What kind of resolutions do you make? Are they serious or silly? Have you ever accomplished a 365-day commitment to your goal? As for me, there's a sale at Yankee Candle and it's calling my name!