Last month, I have no idea how it happened, but the main blog content from January got posted with my February blog instead of the content I prepared. My sincere apologies for that. What should have been an introductory post about the history of Colorado Springs ended up being a repeat of entrepreneurs founding America. If you missed that post in January, you can read it again here (winks): https://www.hhhistory.com/2020/02/grand-opening-colorado-springs.html.

Now, let's get on with what *should* have been posted last month.

My very first book series highlighted pioneers in America and their refusal to give up, no matter the circumstances. The same can be said of anyone establishing a new town or city. Since I have been living in Colorado Springs for more than a decade, I've been itching to explore the rich history right here. So, here we go! 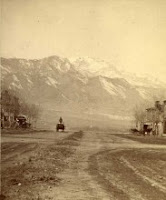 The 14,115 foot mountain called Pike's Peak has long been the focal point of everyone who lives in what is now the Colorado Springs area. The oral tradition of the Ute people call it Tava – or "Sun Mountain" – for the way it collects and reflects the morning's rays. The Spanish, who settled in northern New Mexico and explored the area beginning in the 16th century, called it "Almagre" for its vibrant red coloring.

The first American official to encounter the mountain was Zebulon Montgomery Pike, a young army lieutenant, who was dispatched to survey the southwestern boundary of the newly acquired Louisiana Territory -- thanks to Lewis and Clark. When he first saw the mountain looming in the distance, Pike named it Grand Peak. Deep snow prevented him from reaching the summit on his first attempt, but in 1810, he published the account of his expedition and literally "put the mountain on the map." As a result, his name is forever attached to the peak. 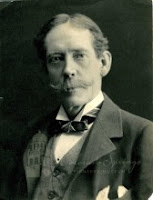 The discovery of gold spurred the first permanent settlement in the region. In 1859, Colorado City was established at the lower end of the Ute Pass trail. The rugged and wild supply camps sold goods and equipment to eager miners on their way west. Old Colorado City is still a distinctive community on the west side of Colorado Springs. It is an historic district with its own personality, quirky shops, and unique restaurants. It survives as a living legacy of the region's frontier spirit, and every year that legacy is celebrated with the annual Territory Days during Memorial Day weekend.

The Colorado Springs that exists today sprang from the imagination of General William Jackson Palmer, a Civil War hero and railroad magnate. He established Colorado Springs on July 31, 1871. Palmer had a distinct plan right from the start, to use the area’s enticing scenery, nearby mineral springs, and other amenities to attract residents to a "resort" town. He laid out the broad streets, hauled in 10,000 trees to make the city green and lush, and built lavish, European-style buildings.

Unlike a lot of other "boom" towns that happened due to miners seeking gold, Colorado Springs actually attracted wealthy residents, capitalists, intellectuals, artists, writers, and inventors right from the start. It served as a destination for tens of thousands of health seekers hoping the community's abundant sunshine and fresh air would cure tuberculosis. After the 1891 discovery of gold in Cripple Creek, just to the west of Pikes Peak, even more wealth came to Colorado Springs. For a time, the city had more millionaires per capita than any other place in the U.S. 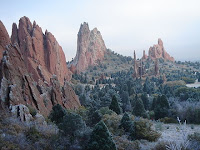 Today, entrepreneurs and visionaries are still adding intricate layers to the economy here. Colorado Springs is at the same time an art colony, college town, military installation, destination for the high-tech industry, and home to the U.S. Olympic Committee headquarters. Yet, at the heart of it all, you can still find remnants of Palmer's healthful, attractive, community with an extensive park system, trails galore, red sandstone spires, and that ever-present feature mountain.

As Matt Mayberry (Colorado Springs Pioneer Museum, 2008) wrote: "The Pikes Peak region is a cultural and geographic confluence. It's where the mountains meet the plains, where the Southwest joins the heartland, where ancient cultures converge with 21st century society, and where the past informs the future. For some, it's stirring enough to inspire poetry."

* What might be a reason YOU would have traveled west to uncharted territory?

* If you had been one of the first people to discover the natural hot springs in this region, what would you have done?

* Have you ever visited Colorado Springs or anywhere in Colorado? Where and when?

Leave answers to these questions or any comments you have on the post below. Come back on the 9th of April (my son's birthday) for my next appearance.

Tiffany Amber Stockton has been crafting and embellishing stories since childhood, when she was accused of having a very active imagination and cited with talking entirely too much. Today, she has honed those childhood skills to become an award-winning and best-selling author and speaker who is also an advocate for literacy as an educational consultant with Usborne Books. She loves to share life-changing products and ideas with others to help better their lives.

She lives with her husband and fellow author, Stuart Vaughn Stockton, along with their two children and two dogs in Colorado. She has sold twenty (21) books so far and is represented by Tamela Hancock Murray of the Steve Laube Agency. You can find her on Facebook and GoodReads.
Posted by Tiffany Amber Stockton at 1:00 AM