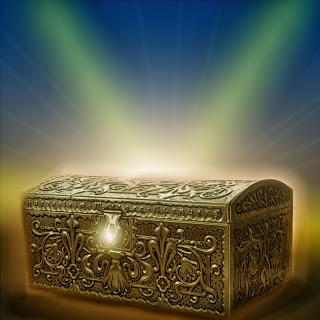 The searching for the Oak Island treasure has been going on for over 220 years. Which means, whatever is hidden on Oak Island was buried long before that.

Much mystery and speculation surrounds the Oak Island treasure. Is it real? Or only a legend? Did someone back in history already dig it up and kept their find a secret? Who built the elaborate traps and tunnels that rival an Indiana Jones movie? What were they hiding? 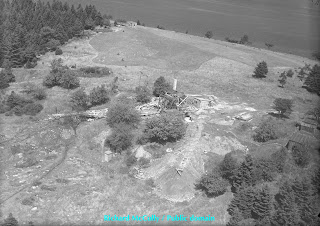 Because this treasure hunt is so vast, spans more than two centuries, and includes multiple dig sites, I will attempt to touch on only a few of these.

What is the suspected treasure buried on Oak Island?
Here are some of the many theories:
~Pirate treasure
~Shakespearean manuscripts
~The Holy Grail and/or Ark of the Covenant buried by the Knights Templar
~Lost Inca or Aztec Treasure
~Something else entirely
~Possibly more than one treasure buried at different times by different groups of people

The first know account of people searching for the Oak Island treasure and finding evidence that was treasure buried on the island is around 1799 or 1795. Dates vary depending on the version. A teen (or a young man) on a fishing trip (or scouting out farm land to purchase on the island) found a depression in the ground. The man was Daniel McGinnis. Having heard stories of Captain Kidd’s buried treasure thought this depression could be where he buried his ship full of loot. Captain Kidd as well as other pirates had been know to frequent the water in and around Mahone Bay where Oak Island is located.

McGinnis enlisted the help of two friends, John Smith and Anthony Vaughn. They found a flagstone two feet down in the depression. Continuing to dig, they found log platforms every ten feet. At ninety feet, they found a huge green stone with inscribed symbols.

Another story goes that the teens dug only thirty feet down before giving up due to “superstitious dread.” Then in 1802, the Onslow Company dug to ninety feet where the stone covering was found. When this stone was removed the shaft filled with seawater. Several more attempts were made by this company and others to re-excavate this shaft and to dig parallel shafts to dig sideways from. They all filled with seawater.
Throughout the 1800s various companies have attempted to search for the Oak Island treasure at the bottom of what has become known as the Money Pit. I think this name has two meaning. First, it’s a pit believed to have great riches at the bottom. Second, people have dumped vast amounts of money into excavating this shaft but have come up empty-handed.
In 1909, a team from the Old Gold Salvage group led by Captain Henry L. Bowdoin made an attempt to find out what was at the bottom of the Money Pit. Franklin Delano Roosevelt was a member of the Old Gold Salvage group. The team left late that year not having found the treasure.

Between 1928-1939, two separate attempts were made to recover the treasure; the first by William Chappell, and the second by Gilbert Hedden. Neither were successful.

From 1959-1966, the Restall family tried their hand at recovering the treasure. Their attempt ended tragically with the death of Robert Restall, his oldest son, and two other men in 1965. They were all over come by hydrogen sulfide.

That same year, Robert Dunfield leased portions of the island to dig on. In order to get the massive crane to the island, a causeway was constructed, connecting the island to the mainland. Dunfield’s lease ended in 1966 without finding the treasure.

In January of 1967, Daniel C. Blankenship, David Tobias, Robert Dunfield, and Fred Nolan formed a group for exploration on Oak Island. Two years later, Blankenship and Nolan had a falling out. Blankenship and Tobias formed Triton Alliance. Over the years and into the 1990s, Triton Alliance sued Nolan a number of times over several lots on the island as well as access to the causeway. They always lost.

In 2005, fifty percent of Oak Island was purchased from Tobias by Rick and Marty Lagina of Michigan. The History Channel has been filming the Lagina brothers search for the treasure. The series has run for seven seasons, and still the treasure eludes treasure hunters. 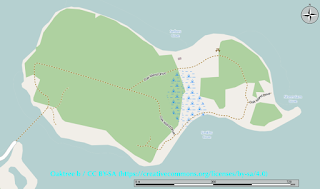 Evidence has been uncovered that the triangle-shaped swamp on Oak Island is man-made. Also, one theory is that Oak Island used to be two islands that were connected by filling in the space between these islands which formed the swamp. In this theory, a ship laden with treasure sits buried at the bottom of the swamp that was sailed between the supposed two islands and covered over to join the two island and conceal the treasure.

Here are some of the many artifacts which have been found.
~Unearthed wooden beams and logs dating back hundreds of years
~Coconut fibers used in the flood tunnels dating back to 1260 (Coconuts don’t grow in Nova Scotia. The nearest coconuts grow more than a thousand miles away)
~Human bone fragments found buried 160 feet deep
~A Spanish coin from the 15th or 16th century
~A lead cross believed to have belonged to a Knights Templar. The composition of the metal dates it back to before the 1300s.
~Brooch pieces, a lock plate, carvings in huge stones, iron spikes, and much more

Though many items have been found over the years, not any of the big stashes believed to exist have been uncovered.

Since this hunt has been going on for many centuries, the amount of information is vast and impossible to cover in a single post. I have only scratched the surface. For more information on the Oak Island treasure, check out the History Channel’s series called The Curse of Oak Island.

THE DAUGHTER'S PREDICAMENT (Book 2 in the Quilting Circle series )

Book 3 in the Quilting Circle series releases June 2020. The Damsel's Intent--A hermit comes down from the mountain to fetch a husband.