April 2 happens to be the wedding anniversary of Charles Dickens and his wife Catherine Hogarth. So enjoy these tidbits about the famous author, his wife, and their marriage.

Catherine Hogarth was born in Edinburgh, Scotland in 1815 to George and Georgina Hogarth. They moved to England in 1834 when her father took a job as a music critic for the Morning Chronicle. Catherine was nineteen years old at the time, and in the blushing beauty of her youth. The eldest daughter of 10 children, Catherine was both intelligent and responsible.

Charles Dickens was also working for the Morning Chronicle at the time, and he was immediately captivated by the intelligence and beauty of this young woman. Dickens invited her as a guest to his twenty third birthday party. He evidently came to adore her very much, and the sentiment seems to be reciprocated since Catherine wrote to her cousin that "Mr. Dickens improves very much upon acquaintance."


"When the couple met, Charles put Catherine on a pedestal. His childhood was scarred by poverty and the shadow of the debtors’ prison; in contrast, Catherine came from a comfortable, happy middle-class family. I believe Dickens wanted to emulate that: he wanted a wife and mother who would give his children stability and a carefree home. Catherine became his ideal woman." Lucinda Hawksley of BBC

The attachment progressed, and Dickens proposed in 1835. Catherine and Charles were married April 2, 1836 in London.

They began their married life in a small flat in London. Both seemed incredibly happy. Dickens even remarked that if he were ever to become rich and famous, he would never be as happy as he was in that little flat with Catherine. As for Mrs. Dickens, she was incredibly proud of her husband and his successes, and she even traveled with him to America in 1842. During their journey, Dickens penned a letter to a friend stating that Catherine never felt gloomy or lost courage throughout their long journey by ship, and "adapted to any circumstances without complaint".


"In addition to being a mother, Catherine was an author, a very talented actress, an excellent cook and, in her husband’s words, a superb traveling companion. But as the wife of such a famous figure, all of that has been eclipsed" ~ Lucinda Hawksley of BBC

Charles and Catherine had 10 children during their union and enjoyed many happy years together.

For more detailed information on Catherine's life, I suggest this article from BBC written by one of the great granddaughters of the couple.
http://www.bbc.com/culture/story/20160519-the-forgotten-wife-of-charles-dickens 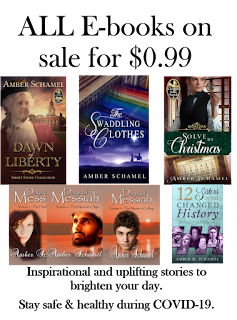 Because of the COVID-19 Stay at home order, I've discounted ALL of my ebooks to only $0.99 on Amazon. Ebooks can be read on any phone, tablet or computer by downloading the free Amazon kindle app.

Books are a great way to pass the time while infusing your soul with uplifting and inspirational messages. My way of saying, stay safe and healthy. God bless you all!
https://www.amazon.com/-/e/B00CIXK91M
Two-time winner of the Christian Indie Award for historical fiction, Amber Schamel writes riveting stories that bring HIStory to life. She lives in Colorado Springs near her favorite mountain, Pikes Peak.