The Butter on Your Bread Growing up, I can remember that looking for the butter at Grandma’s house could be tricky. She saved every butter tub ever emptied and used them as leftover containers. The butter containers filled the fridge and no one knew which one actually had butter in it! Only butter was good enough for her crusty homemade bread, never margarine, but that’s another blog. Grandma didn’t make her own butter any longer, though she certainly did so in the past.
Wondering who actually thought to “churn” butter from milk, I came across the probable story of how butter was invented. Rumor has it a nomad made the first batch by accident. After tying a sheepskin bag of milk to his horse and jostling it with a day of riding, he noticed the transformation. Churned milk fat solidifies into something wonderful.
By the Middle Ages, Europeans were hooked on this delicious accompaniment to their daily bread. It was popular among peasants as a cheap source of nourishment and prized by nobility for the richness it added to cooked meats and vegetables. Until the 1600s, butter-eating was banned during Lent. However, butter proved so necessary to cooking that the wealthy often paid the Church a hefty tithe for permission to eat the fat during the month of self-denial. Demand for this perk was so high that in Rouen, in northwestern France, the Cathedral’s Tour de Beurre — or Butter Tower — was financed and built with such tithes.
In Ireland, butter was so important to the economy that merchants opened a Butter Exchange in Cork to help regulate the trade. Today, barrels of ancient Irish butter, traditionally buried in bogs for aging, are among the most common archeological finds in the Emerald Isle. 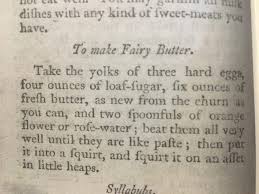 Butter came to America with the colonists as did a delicacy called Fairy Butter, a sweet dessert sauce. Here’s the recipe: If you’re wondering Orange flower water is made by crushing orange blossoms into a paste and combining it with water. Let it sit for a few weeks then strain out the blossoms. It is said that Fairy Butter was a favorite of George Washington and often served at Mount Vernon.
Every pioneer woman with a milk cow in the barn, had a butter churn, or at a very least a mason jar with a tight lid, in order to put butter on her table. 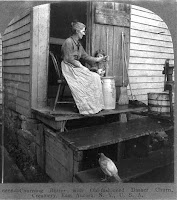 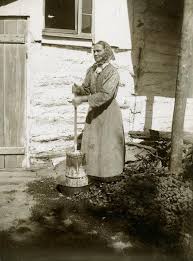 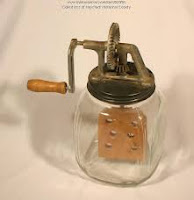 Churning the butter took time and effort, a task often relegated to the children in the family, or in some cases, even a dog or goat, if they had one of these contraptions.
What the cow eats influences the color of the butter. In winter with the absence of greens for the cattle, butter would often be white, while springtime butter was more likely to be shades of yellow. Remember in Little House in the Big Woods, Ma wanted her butter to be pretty so she boiled a grated carrot with a little milk, turning it bright orange, then added this strained milk to her butter churn. It not only made the butter yellow, but provided a treat for Mary and Laura who loved to eat the milky pieces of boiled carrot strained from the pot.
Try making butter today at home. It’s a great learning opportunity for kids. Pour heavy cream into a mason jar, filling it half-way. Screw the lid on tight and shake the jar for approximately 5-7 minutes. Remove the solids from the jar and spread it on a piece of bread. Simple, huh? 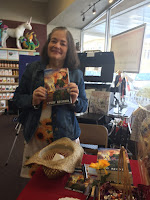 Scribbling in notebooks has been a habit of Cindy Regnier since she was old enough to hold a pencil. Born and raised in Kansas, she writes stories of historical Kansas, especially the Flint Hills area where she spent much of her childhood. Cindy is married to her husband of 37 years, has two grown sons, a son residing in heaven, and two beautiful daughters-in-law.
https://cindyregnier.com/