I often find myself singing this little chorus I learned when I was so little at Sunday School. I do not want to be like the five virgins with no oil in their lamps to keep them lit until the groom arrives!

From time immemorial, man has sought a way to light the night. Torches, candles, various kinds of oil, or melted fat with a wick worked, but not all that well. All had their drawbacks. 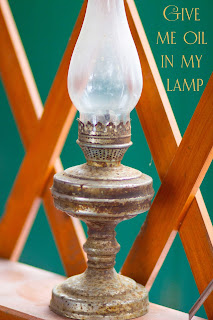 In 1780, Aime Argand invented a new type of lamp that glowed brighter than previous ones. It mostly burned whale or seal oil, but also other types of nut or vegetable oil worked also, and it put out a brighter, safer light.

Whale oil rendered from the poor beast’s blubber became the choice fuel for years, but it quickly increased in value in the 1840s as the goliaths' numbers had been decimated. From around fifty cents a gallon, it soared from a dollar-thirty all the way to two dollars and fifty cents per gallon by the mid-40s.

To save on their fuel costs, many families switched to camphine, a mixture of turpentine and alcohol. Isaiah Jennings first blended it in 1830. Going for only fifty cents per gallon, it quickly replaced the whale oil as the lamp oil of choice due to the savings. But it was also more volatile and dangerous.

Folks had become habitual users of their lamps and used to lighting their nights. Candles were a pain and not as bright. As Plato said, necessity is the mother of invention.

In 1846, a medical doctor and geologist Abraham Gesner distilled a clear liquid from coal. He called it kerosene from the Greek keroselaian meaning “wax oil.” Coming in at the same price as the camphine oils, only fifty cents a gallon, it captured a small piece of the market right away.

But it wasn’t until it was discovered that kerosene could be extracted from petroleum----eliminating the production problems Doctor Gesner experienced----that it proved to be a true competitor. The good doctor built a successful company lighting city streets with his wax oil. That idea expanded rapidly with a worldwide race for petroleum ensured.

George Bissell and Edwin L. Drake drilled the first well specifically looking for oil. At first, what was called Drake’s folly, the well soon proved the naysayers wrong. At sixty-nine and a half feet they hit liquid gold near Titusville, Pennsylvania.

While camphine with its higher flash point was more dangerous, it still dominated the market until Congress passed an excise tax on alcohol to help pay for the Civil War, thus making the kerosene cheaper. And people soon realized how safe kerosene, virtually eliminating the use of camphine altogether.

Enter John D. Rockefeller; we've all heard that name! At the age of thirty-one, he founded the Standard Oil Company in 1870 and became the richest American in the county’s history selling oil and lighting lamps across the country, from sea to shining sea!.

The majority of my historical Christian romance novels are set in the 1800s, so everyone mentions lighting their lamps, with wicking them up for more flame which meant more light or down until all the oxygen was stolen from the flame, dousing its fire when they’re ready for bed. 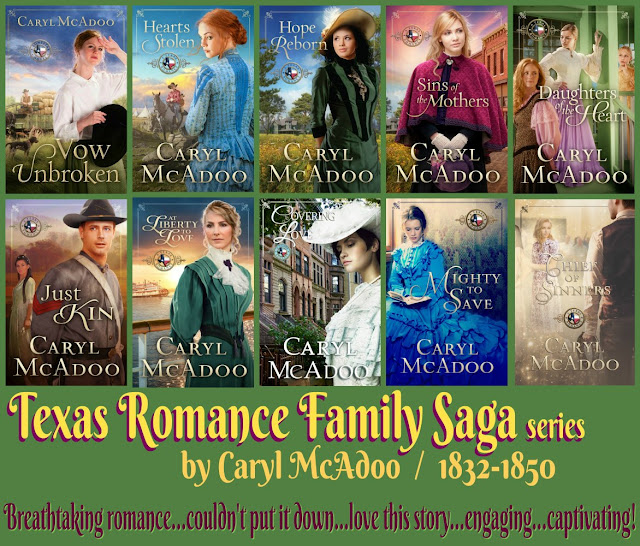 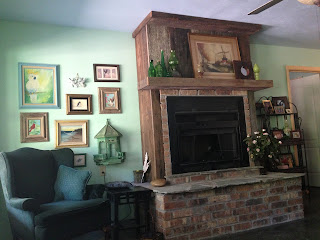 I have four oil lamps in my home. One sits on the fireplace mantle (green to the left), one on the dresser in my bedroom as decorations. One in the guest room and one on top the fridge.

Side note: My husband built the fireplace, his first, using barn wood from our previous horse and goat barn, bricks, and flagstone.

But when a bad storm rolls through and our electricity goes out for an hour or a day, we bring them down and turn the little dial that lifts the lamps' wicks enough to light so our house isn’t dark. Then we can still play Quirkle.

While today we take flipping a switch to light our homes for granted, once upon a time chasing the night’s darkness away proved not to be the easiest of maneuvers. 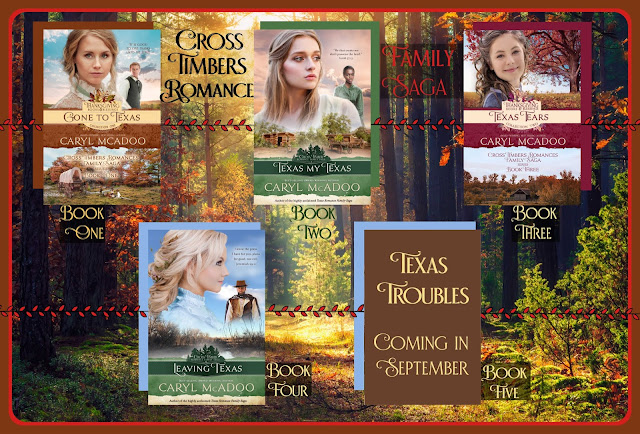 If you enjoy covered wagon journeys, living in a new small settlement, watching babies grow up, going to market and starting new businesses with a whole lot of romance thrown in to boot, you’ll love my Cross Timbers Romance Family Saga, four books strong now and number 5 launching in September!

There’s still plenty of time to catch up and enjoy some good reading this summer.
♪♫✞♪♫•*♥Happy Anniversary to me!✞♥¨♪♪♪♫✞  Ron and married 52 years ago today: June 22, 1968!

BIO: Award-winning Author Caryl McAdoo prays her story brings God glory! And her best-selling novels are blessed with a lion’s share of 5-Star ratings! With fifty-and-counting titles, she loves writing as well as singing the new songs the Lord gives her—listen to a few at YouTube. She and husband Ron share four children and nineteen grandsugars----soon to be twenty! The McAdoos live in the woods south of Clarksville, seat of Red River County, in far Northeast Texas, waiting expectantly for God to open the next door.