One of my earliest memories is summertime at my Grandma Chamberlain’s farmhouse.

Common blue violets, or meadow violets, grew in her ankle-deep lawn, shaded on the west side of the house by giant trees, the type of which, I’ve no idea. Memory focuses on the diminutive purple flowers and the cool grass beneath my feet, soft and inviting to a wandering child looking for a magical world in which to lose herself on a hot summer day.
My grandparents didn’t have air conditioning. But they had a porch that stretched the width of their old white farmhouse, occupied by rocking chairs, and accessed by four broad steps that led to the paint-starved wooden porch planks.

And when all the family gathered together for the Fourth of July or one of the grandparents’ birthdays, they had homemade ice cream.

My much-older brothers always turned the hand crank, and looking back, I suspect it was a White Mountain ice-cream maker that churned out mountains of smooth vanilla, the likes of which I have never tasted as an adult.

Why is that, I wonder? I’ve eaten a lot of ice cream over the years, but none reaches the pinnacle of Grandma’s creamy vanilla – that soft, yellowish concoction that made my brothers’ arms ache and flex competitively to see who would get the last turn of the resistant crank.

That’s how we knew it was ready, if they couldn’t budge it another inch.

Then grandma would come out with a dishtowel and more ice, remove the dasher (and hand it to me), then pack everything down until after the main course.

I got to lick the dasher clean.

According to the Wikipedia definition of ice cream, it is a “sweetened frozen food typically eaten as a snack or dessert. It may be made from dairy milk or cream and is flavoured with a sweetener, either sugar or an alternative, and any spice, such as cocoa or vanilla. Colourings are usually added, in addition to stabilizers. The mixture is stirred to incorporate air spaces and cooled below the freezing point of water to prevent detectable ice crystals from forming. The result is a smooth, semi-solid foam that is solid at very low temperatures (below 2 °C or 35 °F). It becomes more malleable as its temperature increases.”

Somehow, that description just doesn’t cut it for me.

In some countries the delectable dessert is referred to as frozen custard, frozen yogurt, sorbet, and gelato. Dairy substitutes may also be used in place of cream/milk such as soy, cashew, coconut, almond or tofu milk.

The origin of frozen dessert is rumored to be found in ancient China. And the Roman Emperor Nero is said to have called for ice from the Apennine Mountains for his honey-and-wine sorbet. As the say, when in Rome ...


Other historians argue that the Mongolians beat everyone to the draw.

Next on the historical record are traditions that trace forms of ice cream to Italy via Marco Polo, then to France, and later to England where it was regarded as “frozen snow” by Charles I.

(Speaking of snow, that is one ingredient my children quickly gathered in Colorado each fall, to which they eagerly added vanilla and milk.)

Frozen concoctions also appeared in south Asia and Persia, and Quaker colonists reportedly introduced ice cream to New England.
An English woman, Agnes Marshall, and American Nancy Johnson, are credited with inventing hand-cranked ice-cream freezers in the 1840s. I can’t help but believe that we owe these women a debt of gratitude.

And the portability of ice cream changed forever at the 1904 World’s Fair in St. Louis with the advent of the ice-cream cone. God bless America.

After Marshall and Johnson's small hand-cranked inventions, White Mountain came out with a larger, pine-bucket model in 1853. I reference a White Mountain ice-cream maker in my novella, Mail-order Misfire.

Of course I don’t know for certain if my real-life Grandma’s hand-crank ice-ream freezer was a White Mountain model, but in my memory, the tall, wooden bucket that held the canister, dasher, and ice must surely have been close to the historic 1853 model.

Maybe so. But I prefer the muscle-powered version and hot summer days when my brothers vied for bragging rights and I ran barefoot through Grandma’s violet-dotted grass.
~ 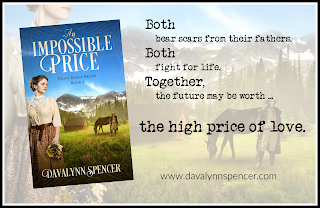 Bestselling author and winner of the Will Rogers Gold Medallion for Inspirational Western Fiction, Davalynn Spencer can’t stop #lovingthecowboy. When she’s not writing Western romance, she teaches writing workshops and wrangles Blue the Cowdog and mouse detectors Annie and Oakley. Connect with her at https://davalynnspencer.com/books/mail-order-misfire/
Posted by Davalyn Spencer at 12:00 AM