Nursing in the 1860’s – with giveaway -- By Donna Schlachter

Often, when we think back to medicine in history, leeches and bleeding comes to mind. And while those techniques were used for centuries, we do see great strides made and progress in surgeries and the understanding of how the human body works.

One of the major reasons for advancements in medicine in general, and nursing in particular, was the American Civil War. Hundreds of thousands of men died in combat, but more died on the operating tables and in the field hospitals that popped up near every battle, major and minor.

Often, the only answer to the catastrophic injuries sustained on the battlefield was amputation. Nurses were often soldiers pressed into service to hold the patient down, or to administer chloroform directly from a bloodied rag that had been used for a dozen patients or more prior. Camp followers, accustomed to cooking meals and doing laundry, were often asked to carry damaged and diseased appendages outside the camp and burn them.

Florence Nightingale and Clara Barton, highly trained nurses themselves, were appalled with this situation, and resolved to make changes. After the war ended and the country entered into an uneasy truce with itself, they petitioned government to set up training schools for young women to learn anatomy, biology, physiology, and pharmacology.

However, in the uneasy years immediately after the war, when nurses were still needed to care for those recovering from their wounds, as well as to offer assistance in hospitals and medical practices, others set up shorter-term training schools which trained nurses in the rudiments of medicine, encouraging them to spend extra-curricular hours of learning and apprenticeship under trained doctors, to graduate and send them out into the cities and towns where they were sorely needed.

Many industrious young women, or older spinsters and widows, undertook this rigorous training. These informal schools filled the gap until the longer, more formalized schools admitted students in the late 1860’s and early 1870’s.

By this time, the Lister method of sanitary surgery, which included sterilizing instruments and sanitizing the patient, the doctor and attending staff, and the operating theater, were much in discussion. While American doctors initially decried the extra work, it soon became apparent that their mortality rate was much higher, and the time spent fighting infection soon convinced them to adopt the method.

Research into breathing issues such as asthma was also generating alternatives. While initially the cause of asthma was thought to be excess exercise or cold air, studies soon proved there were other causes, including allergies. Several new treatment options were adopted, including the guarded use of belladonna, and strong coffee, both of which proved successful in many cases.

Nurses were often employed in small communities that did not require the services or could not support a full-time doctor. They carried basic instruments, common medicines, and could as easily deliver a child as remove tonsils or pull a tooth.

While the role of nurses has changed a great deal since then, no doubt there are many who would never have survived without the basic medical skills taught these brave women in our history.

Leave a comment and be entered into a drawing for an eBook version of A Nurse for Caleb, as a special pre-release gift.

On the Pathology of Asthma—Dr. Henry Salter 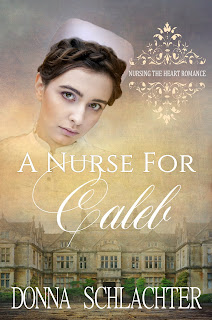 In 1868, Tessa, a Mennonite nurse graduates from nursing school and is assigned to the Amana Colonies in Iowa because of her expertise in treating asthma and other breathing problems. As a former student at a women's medical school, she knows more than most about respiratory diseases. She's also had her fair share of heartbreak when, upon her mentor's death, she was forced to abandon her dream of becoming a doctor. Will she be able to use her skills? Or will her gender keep her from helping those who truly need her?

Seth, a widower in Amana, is still nursing a broken heart from his sweetheart's passing two years before. Now raising their invalid son Seth on his own, he wonders why God didn't listen to his prayers for healing for his family. Caleb has been afflicted with the same form of asthma that killed Anna, and Seth stands by helplessly as his son fades away. Can he trust God and trust medicine, or is faith in one mutually exclusive of faith in the other?

Posted by Donna Schlachter at 12:30 AM