From the turbulent seas of Ireland to the restless shores of New York; from the coal mines of Pittsburgh to the swamp-infested marshes of Tennessee. From the Erie and New Basin Canals to thousands of railroad tracks—the Irish immigrant carved their indelible mark upon America. 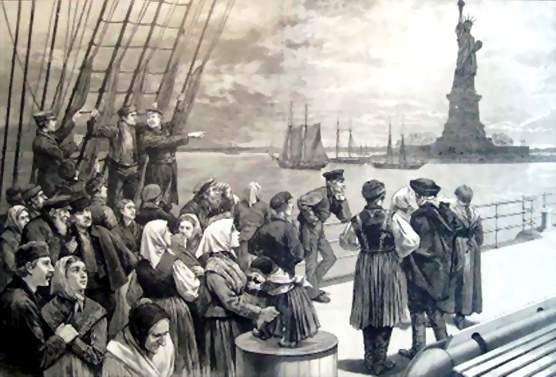 Ireland’s great potato famine caused a massive wave of Irish emigration to America. The Irish were seeking freedom from British tyranny. Many of the Irish songs like “The Wearin’ of the Green” speak of the Irish plight.

Leaving their homeland, they endured the cramped, conditions of the ship Dunbrody. On arrival, they were herded onto Ellis Island, and then quarantined. When freed, they saw only these signs in store windows: “No Irish Need Apply.” 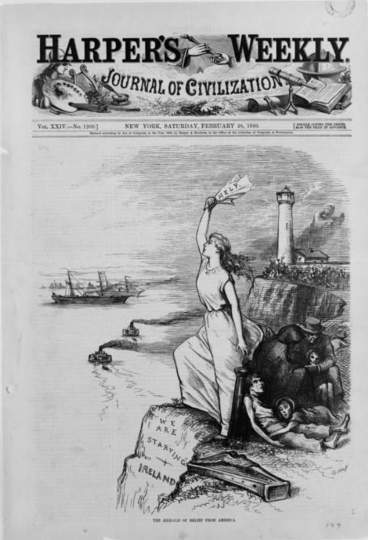 Most refugees arrived in America destitute, almost 650,000 in New York alone! Sadly, 60 percent of children born to Irish immigrants in Boston died before the age of six. Irishmen took life-threatening jobs that were too dangerous for anyone else to do.

They were desperate. They accepted work that could kill, cripple, or damage their health for a measly one dollar a day. There were plenty of hazardous jobs that snatched the prime from youth and left them with debilitating bodies, or worse, death. Slaves were valuable and Irishmen were dispensable. For instance, in the antebellum South, slave owners considered slaves valuable property and Blacks were prohibited from doing any hazardous work. No such restrictions were designated for the homeless immigrant. So, the dangerous jobs were left to the Irish.

There is a saying that goes something like this, “An Irishman is buried beneath every tie.” They are also buried in mass graves in Duffy’s Cut, PA., and Funks Grove, IL. 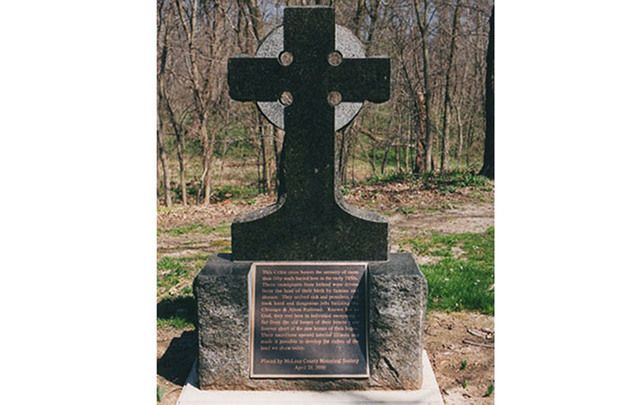 Business owners were indifferent if Irish laborers died by the thousands. There was plenty more to replace them. It is estimated that 8,000 to 30,000 Irish laborers are believed to have died from cholera and yellow fever, brought on by the life-threatening work of building the New Basin Canal in New Orleans during the late 1830s. It wasn’t until 1990 a Celtic cross was dedicated to the thousands of men who died in the 1830s. It reads: “In memory of the Irish immigrants who dug the New Basin Canal, 1832-1838, this Celtic cross carved in Ireland has been erected by the Irish Cultural Society of New Orleans.” 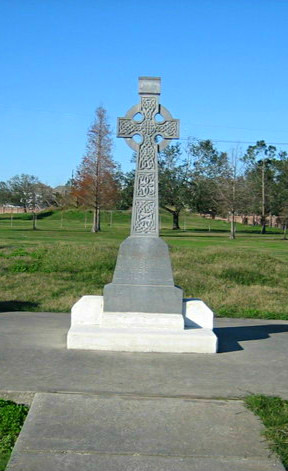 Because of the Irishman’s poor status, the Civil War Conscription Law forced the Irish to fight in a war that others could pay their way out of fighting. Free black men could volunteer to fight; however, they were not drafted or forced to fight because they were protected by the Emancipation Proclamation.

Oftentimes, the Irish families’ dreams were crushed beneath these hard conditions in their adopted country. Still, the Irish immigrants served bravely in the Civil War and in both armies. They were repeated targets for public and military discrimination. However, they refused to give up. Persevering through unimaginable barriers due to their nationality, they doggedly pursued their beliefs, and overcame the prejudices and poverty. How, you ask, did they do this?

On the gravesites of the mass grave in Funks Grove, Illinois, and upon the stately hills of Gettysburg, Pennsylvania, you will find a Celtic Cross. Not the engravings of their fearless leaders, not an iron spike, or fist, or snake, just a cross and a wolfhound.

In Gettysburg, there stands a Celtic cross supported by a granite base, standing 19’ 6” tall. The front of the cross is an ornate bronze ornamented by a 2nd Corps trefoil, the numbers of the three New York regiments, the Seal of the State of New York, and a harp flanked by eagles. At the foot of the cross lies a life-sized Irish wolfhound, the symbol of honor and fidelity. This beautiful work of art was lovingly sculpted by William R. O’Donovan, a former Confederate soldier who fought at Gettysburg. 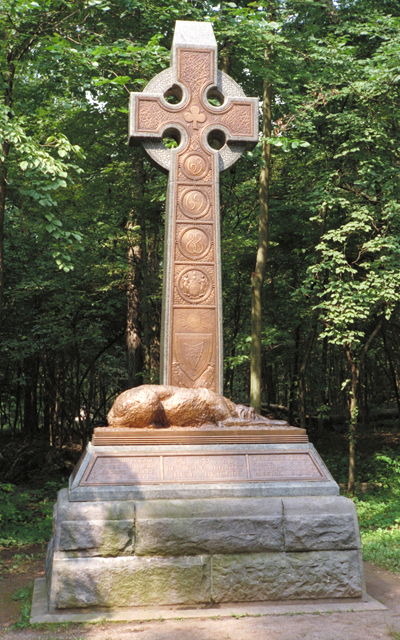 The monument was dedicated on July 2nd, 1888. Father William Corby, a chaplain to the Irish Brigade, attended the dedication. He held a mass for the veterans and blessed the monument and said these few words; “We have unveiled this pile, and it will stand to perpetuate the fame of those heroes. To keep their memory green in the American heart, this Celtic Cross has been erected. It is an emblem of Ireland, typical of faith and devotion, and the most appropriate that could be raised to hand down to posterity the bravery of our race in the great cause of American liberty.”

The Celtic Cross at Gettysburg is located at the south of Gettysburg on the south side of Sickles Avenue just before the beginning of The Loop in the Rose Woods.

The Irish immigrant and countless other immigrants, American Indians, slaves, men, women, and children bondservants were discriminated against. They starved on reservations, worked in sweatshops, mill shops, and cotton fields.

Those who persevered held a common goal—they believed. That belief has come to be known as The American Dream.

The Irish perseverance is an example of what embodied our ancestors to greatness. The grit, determination, and inspiration to rise above a lowly station in life. Not by might, but by their belief in a God who listens, sees, and rewards. If not in this life, then in eternity.

The Irish came off the Dunbrody Famine Ship with nothing, like so many other immigrants that came after them.

The Celtic Cross, the symbol of the Irish’s staunch faith in Jesus Christ, carried many an Irishman through the hardships they endured.

Youth, dreams, and life are fleeting. The True American Dream lies in Christ Jesus. He alone holds the key to Liberty and Truth. “Now the Lord is the Spirit; and where the Spirit of the Lord is, there is liberty.” (2 Corinthians 3:17 NKJV) 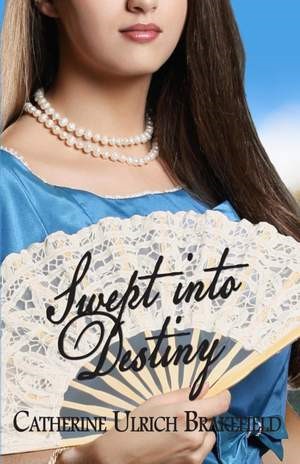 Ben McConnell in Swept into Destiny is a proud Irish immigrant who is determined not to give up in spite of hunger and deprivation that haunt his steps. He has a distaste for the English and rich landowners of Ireland and America. He clings to this hope—the three mustard seeds his father brought from Ireland—and claims Matthew 17:20 “…if you have faith as a grain of mustard seed…nothing will be impossible.” Maggie Gatlan is English and a rich Southern belle. She’s a rebel disguised in frilly clothes and prefers riding astride rather than sidesaddle. She refuses to allow her countrymen to dictate to her conscience. Ben’s and Maggie’s journeys delve deeply into the truth about faith and devotion. 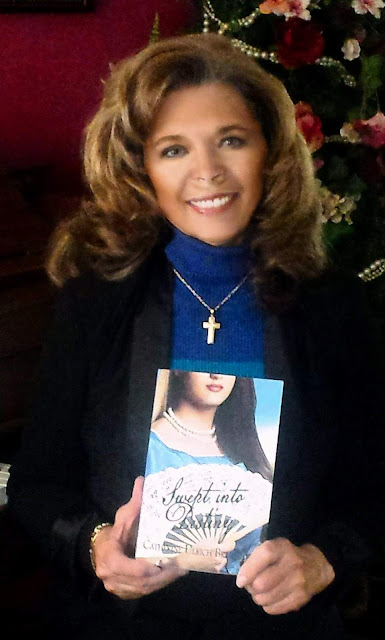