Coca Cola: It's the Real Thing I don't imagine there are many people in the United States or even in the world who haven't heard of Coca Cola. A lot of people call any kind of soda in a bottle or a can Coke, but there is only one true Coke and that's Coca Cola which has been around since 1885 and began as a nerve tonic to help overcome a drug addiction. 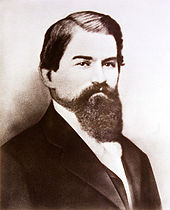 A Confederate Colonel, John Pemberton had been wounded in the Civil War and became addicted to heroine. He had a medical degree and begin research into a way to combat his addiction. He owned a drugstore, Pemberton's Eagle Drug and Chemical House in Columbus, Georgia. He registered a nerve tonic, Pemberton's French Wine Coca, and introduced it at his store. He may have been inspired in his research by a French-Corsican coca wine to which he added the African kola nut as a source of caffeine.

A year later, in 1886, Atlanta and Fulton County passed prohibition legislation. Pemberton promptly marketed a non-alcoholic version of his "Coca-Cola:The Temperance Drink" which appealed to many who chose it as their drink of choice during the prohibition. It sold at Jacob's Pharmacy in Atlanta, Georgia on May 8, 1886 for five cents a glass.

Since soda fountains were already popular because of the belief that carbonated water was good for the health, Pemberton's new drink could be marketed and sold as a patent medicine. Pemberton claimed it to be a cure for morphine addiction, indigestion, nerve disorders, and headaches among other things.

Here's a picture of a fountain dispenser at Fleeman's Pharmacy in Atlanta in 1948 and was called "Boat Motor" because of its resemblance to a boat motor.

Three versions of Coca-Cola emerged and were sold by three separate businesses. Four business men joined with Pemberton to form a co-partnership and combined versions to come up with one. No papers were signed as it was a verbal arrangement. This allowed Asa Candler to acquire a stake in the company in 1887. John Pemberton declared that the name "Coca-Cola" belonged to his son, Charley, but others could use the formula.

Several years of going back and forth with the formula and ownership as new companies formed until, in 1888, Dr. Pemberton died with his remaining shares being sold to Asa Candler. Shortly thereafter, he brought back all the remaining interests to gain complete control of the company. A few years later in July of 1894, Charley Pemberton also died, leaving control to Asa Candler who had already officially formed the Coca Cola company in 1892, six years after the first drink was created.

companies by contract. However, legal problems plagued the company for years bottlers subcontracted to other companies. The contract specified that the bottles would be sold for 5 cents each with no duration. This led to the fixed price from 1886 to 1959. 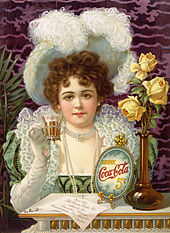 Advertising began promoting the drink and in 1894, the first outdoor sign appeared in Cartersville, Georgia. The syrup was even sold over the counter as a remedy for upset stomach. Here is an example of an early ad.

By the time of its 50th anniversary, Coca-Cola had become a national icon. It was even declared kosher and certified by Atlanta Rabbi Tobia Geffen who was the first person to see the top-secret ingredient list. Then the company made minor changes so it would be accepted by the American Jewish population. 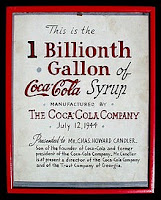 Here is a picture of the original framed Coca-Cola artist's graphic. It was presented to Charles Howard Candler on July 12, 1944 when Coca-Cola celebrated the sale of the "1 Billionth Gallon of Coca Cola" Syrup.

In 1931, the company commission Haddon Sundblom to 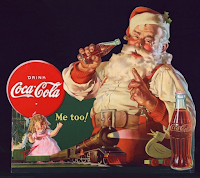 paint a picture of Santa Claus with a Coca-Cola in his hand. Santa then became related to Coke products and have been shown all over the world. Other ads have featured a variety of people and subjects from polar bears to start athletes to movie stars.


Many of us may remember all the controversy surrounding the company's attempt to introduce the "New Coke" and what a tremendous failure it was as consumers didn't want any meddling with the tried and true. Today it is available in a variety of flavors from Coke Zero to Cherry flavored and caffeine free. In addition Coca Cola offers all kinds of drink like water, tea, and other carbonated drinks with 500 brands and 3,900 beverage choices. Coca Cola products are now sold in almost every single country in the world, and from its humble beginnings as a medical remedy for addiction and various ailments, its grown to the largest drink company in the world and one of 50 largest companies.

What is your favorite soft drink, soda, pop or whatever you may call it in your part of the country? If you'll leave your email address, you will be eligible for the drawing of the novella described below.

It's September so can Christmas be far behind? A Gift of Love is now available. 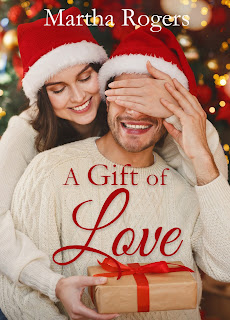 Cherie Kenton came home to Edenville to become business manager of her aunt’s floral shop. Although the town held bad memories for her, the object of that memory didn’t live there anymore. Then, Troy McNeil moved home to partner with his father in his law firm, and his office sat directly across the street from the floral shop. Ten years of the memory of how he humiliated her at their prom has built a wall around Cherie’s heart. It’s a wall Troy is determined to tear down and win back the trust and love of the only girl he has ever truly loved. Will his one selfish mistake as a teenager ruin their chances of ever finding happiness, or will this be the Christmas for the gift of love to reunite their hearts?

Martha Rogers is a free-lance writer and multi-published author from Realms Fiction of Charisma Media and Winged Publications. She was named Writer of the Year at the Texas Christian Writers Conference in 2009. She is a member of ACFW and writes the weekly Verse of the Week for the ACFW Loop. ACFW awarded her the Volunteer of the Year in 2014. Her first electronic series from Winged Publications, Love in the Bayou City of Texas, debuted in the spring of 2015.  Martha is a frequent speaker for writing workshops and the Texas Christian Writers Conference. She is a retired teacher and lives in Houston with her husband, Rex. Their favorite pastime is spending time with their twelve grandchildren and five great-grandchildren.
Posted by Martha W. Rogers at 1:30 AM