Photography for All – The Legacy of George Eastman

In our world with a camera integrated into every phone, it is difficult to imagine a time without photography . . . or even an era where only a few science-minded people could process pictures. (See my March post for more on that topic).

George Eastman lived in such a time, and he changed the world. Pretty impressive for a largely self-educated man. 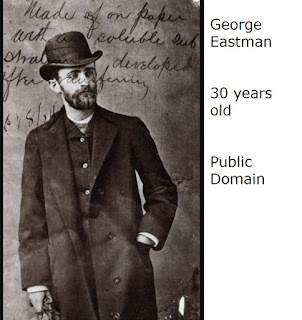 He had a rough start. His father died when he was eight, and his mother took in boarders to pay the bills. In his mid-teens, he left school to work at a local insurance company and then as a junior clerk for a bank.

At age twenty-three, he purchased a photographic outfit (camera) to take on an upcoming vacation. However, it was too awkward and difficult to use. He never took the vacation but became obsessed with photography.

He worked at the bank in the daytime and experimented in his mother’s kitchen at night. An article about the dry plate (as opposed to a wet plate) photography process in a British publication sent him in the right direction. A couple of local amateur photographers helped him formulate his new dry plates. Over time, he worked with other chemists and inventors.

By 1888, the first Kodak camera was placed on the market. Kodak is a word that he made up. He liked the letter “K,” so it starts and ends the word.

This camera used a dry film rolled on a spool. It cost $25 and came with a 100-exposure roll of film. Photographers sent the entire camera back for the pictures to be processed.

The advertisement above highlights the fact that no darkroom is required.

With the commercialization of the Kodak, America’s fascination with photography began. The January 14, 1892 edition of the Aspen Era Newspaper (Aspen, CO) contains an article describing a woman’s obsession with taking pictures of her baby.


She takes about a dozen photographs of that baby every day of her life in all sorts of positions—eating, drinking, sleeping, crying, laughing.

Her husband goes on to complain about the expense. The twenty cents for developing and mounting every picture was draining his resources.

The December 31, 1891 edition of the Leadville Democrat Herald (Leadville, CO) tells of a “blooper” picture. The blooper occurred when a dog chasing a squirrel knocked over a group of hunters posing for a photograph. The camera captured them falling on top of each other.

The same article describes some women who wanted naughty pictures. The man with the Kodak promised to destroy the negatives, but he did not. The result was unpleasant for the women.

Eight years later, Kodak introduced the Brownie camera, which was intended for use by children and sold for one dollar. 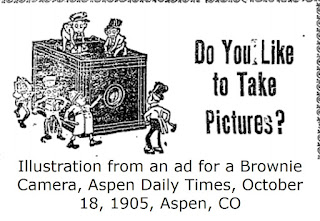 By then, Kodak had a solid lock on the camera industry for photographers young and old. 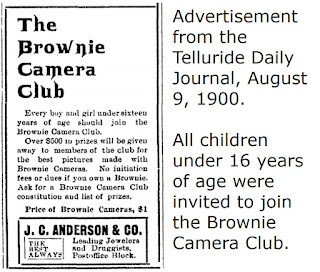 Eastman went on to create a series of photography related inventions and is credited with motion picture technology. He was a visionary business leader and generous philanthropist. 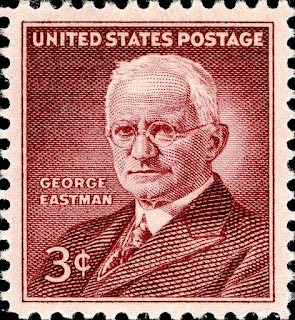 So, the next time you take a selfie, remember the self-educated man who made it possible. 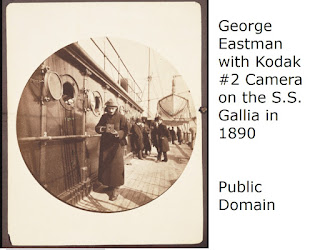 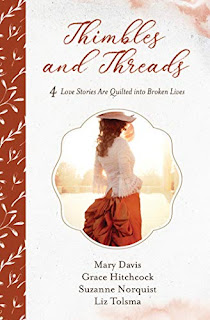 “Mending Sarah’s Heart” in the Thimbles and Threads Collection
Four historical romances celebrating the arts of sewing and quilting.

May be purchased on Amazon. 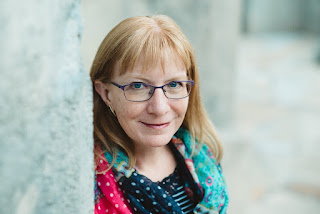 She authors a blog entitled, Ponderings of a BBQ Ph.D.
Posted by Suzanne Norquist at 12:30 AM