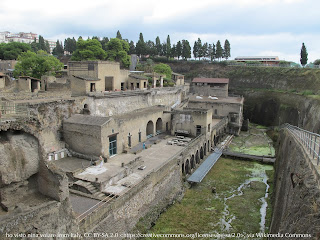 I remember Sunday, May 18, 1980, the day Mount Saint Helens erupted. The winds were such that where I lived didn’t receive the downpour of ash like other areas immediately did. On the other side of the mountains, where my sister attended college, ash rained down. She called and asked how to get ash out of her church dress. So much collected in the college town that she could scoop it off her windowsill as a memory of this fateful day.

So why am I bringing up Mount Saint Helens?

Almost two thousand years ago, in 79 AD Mount Vesuvius erupted. When one hears the name Vesuvius, what pops into most people’s heads? Pompeii. But Pompeii wasn’t the only place destroyed. Pompeii lay south of the volcano while Herculaneum, west of the mountain, was given a far more lethal blast from Vesuvius. 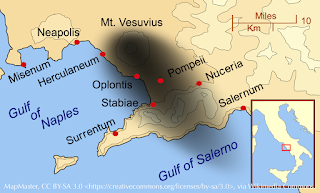 Vesuvius first erupted at 4pm on August 24th, sending a cloud of ash, heat, and debris over Pompeii, burying it and its inhabitants. This is the popular story we hear so much about. But that is not where it ends. (Another source says the eruption had to have taken place on or after October 17th. Either date, the devastation was the same.)

Several miles to the west sat Herculaneum, a hamlet of some 4-5,000 residents. Herculaneum, though about an eighth of the size of Pompeii, boasted more lavish and larger houses. This seems to be where a wealthier class of people lived. When the first eruption happened, Herculaneum could see the several mile high cloud but it was traveling away from them, burying Pompeii.

Just after midnight, the volcano belched again out the west side of the mountain. It sent a wave of super heated gas, ash, and lava in Herculaneum’s direction at 160 kilometers an hour. This pyroclastic flow was far more deadly than the first eruption. Hot lava filled Herculaneum’s buildings, supporting walls and roofs as it encased the city. Herculaneum was buried under 20 meters of pumice, ash, and debris. (Pompeii was buried under only four meters of debris.) What all this debris did was preserve organic material that wasn’t found in Pompeii. Things such as wooden doors and support beams, clothing, and food, among other organic matter. Many of the frescoes and mosaics remain intact. All of these artifacts give a much clearer picture into first century Roman life. 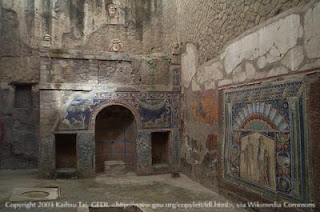 In 1709, long after Mount Vesuvius annihilated Pompeii and Herculaneum and generations had well forgotten there had ever been cities there, a man set out to dig a well. He found far more than he bargained for. This is the traditional story of Herculaneum being discovered. But city remnants were found in earlier earthworks. In 1738, regular excavations began and have continued off and on ever since. Workers would be hired by the wealthy to dig up treasures from the site to bring back to decorate their palaces.

As archeology digs took place in Herculaneum, unlike in Pompeii, bodies weren’t uncovered. It was assumed that, having seen the first eruption, the inhabitants had fled to safety.

In the 1980s, as more portions of the village were excavated, over 300 skeletons were discovered in the boat shed area (that is now inland). It is theorized that the people fled to the water in hopes of rescue. Their deaths would have been fast in the super heated gases that swept down from the volcano.

Today, still only a small portion of the city has been dug up. It is doubtful the whole of Herculaneum will ever be unearthed as the city of Ercolano sits on top of it.