History of the Opal: October's Birthstone 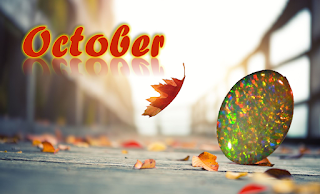 October is finally here! And with it comes cooler weather, pumpkin spice, and everything cozy. If you are born in the month of October, you're lucky to have a birthday in what I consider the most beautiful season of the year. Autumn is the season for color changes, which is why the birthstone of Opal makes perfect sense.

The word "Opal" is derived from the Greek "Opallios" and Latin "Opalus". Both words mean "to perceive a color change." Opal is an extremely old gemstone, with the first known relics dating back to 4000 B.C. found in a cave in Kenya. It is believed that opal originated in Ethiopia, however it was the ancient Romans that made the gemstone popular. Pliny the Elder wrote of the opal in his book, Natural History of the World during the first century A.D. claiming that it was the most prized of all gemstones.

“For in them you shall see the living fire of ruby, the glorious purple of the amethyst, the sea-green of the emerald, all glittering together in an incredible mixture of light”. ~Pliny First Century A.D.

The Romans believed that the source of Opal was India, however that was a myth circulated by traders who sought to protect their interests. The real source was Hungary, what is now known as Slovakia.

Some ancient civilizations believed that opal had the power to bestow upon the wearer the ability to see into the future.

While Cleopatra had a fascination with emeralds, the opal was Mark Antony's beloved gem. According to Pliny, Antony banished a Senator because he refused to sell an opal ring to him.

Antony was not the only monarch who loved the gem. The crown jewels of France, as well as the crown of the Holy Roman Emperor contained opal, Hungarian Royalty and Queen Victoria loved them as well. Napoleon gifted an opal he called the "Burning of Troy" to his empress, Josephine, and she wore it often as one of her favorite pieces.

There are many variations of opal, which is what makes it one of the most diverse and beautiful gemstones in the world, and also makes it a perfect stone for October.

Happy Birthday to all of you beautiful and diverse October folks!

She lives in Colorado Springs near her favorite mountain and between enjoying life as a newlywed, and spinning stories out of soap bubbles, Amber loves to connect with readers and hang out on Goodreads with other bookish peoples.