The Magic of McDaniel Farm

My friends, this blog article did not come easy. In my ongoing quest to explore Gwinnett County’s historic sites, I drove quite a way to McDaniel Farm Park in Duluth, Georgia, and—already sore from several days of long walks—embarked on a paved path in the August heat. About a mile and a set of wrong directions later, I encountered an employee, who told me I was at the new section. Indeed, on a three-mile trail. I needed to drive ten minutes to access the historic farm on 1850 McDaniel Road, not 1851. (Warning to those who might follow in my footsteps.) Hot and hangry, I finally arrived at my destination. Stroll with me on shade-dappled paths populated by more squirrels and birds than people.

One of the first buildings along the trail is the blacksmith shed. All work such as wagon wheels, horse and mule shoes, chains, and harnesses was done on site. 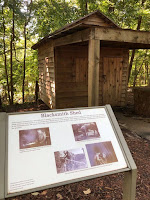 One of the last remaining large tracts of land sold in the 1820 land lottery, the McDaniel farm was purchased by the family in 1859. On 125 acres, they raised everything needed to survive. The farmhouse was built with timber from the property in 1874. Originally crowned with a wood shingle roof, the unpainted dwelling presided over a swept-dirt yard.

Gwinnett County presents the property much as it would have looked in the 1930s. After his father, John D., passed away in 1933, Archie McDaniel assumed the duties of running the farm—at age twelve! A sign told me how, in the summer, he’d make homemade ice cream on the porch while his mother hosted the Duluth United Methodist Church Ladies Rainbow Circle club meetings. (I sure coulda used a bowl today!) He would drive his mother to Atlanta for appointments and the produce to market. His sister, Louise, worked in Atlanta during the week but came home many weekends. The two of them lived in the house and farmed the land until Archie died in 1999. 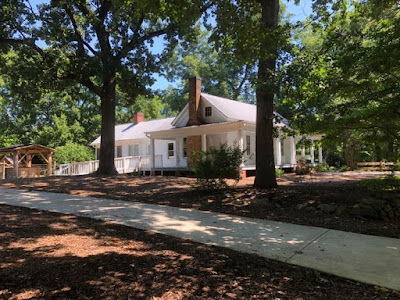 In the chicken coop, the McDaniels kept Rhode Island Reds and Biddies and sold surplus eggs. 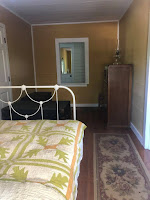 Farmers would slaughter hogs in the fall. The quartered meat would be placed in salt barrels for several weeks to cure. Then the meat would be rinsed and hung in the smokehouse. Fires would be kindled on the floor beneath the meat for extra flavoring.

When something like a barn such as the McDaniels’ needed to be built in the early 1900s, a temporary sawmill would be constructed, with expenses and labor shared among neighboring landowners. Such a mill was erected on the north side of Sweetwater Creek. Instead of donating money, Archie cut and milled timber from the farm for the construction of the new Duluth United Methodist Church building. The lower level of the completed barn was used to stable livestock and as a corn crib, while the upper stored hay. Fodder could be shoveled down via hay chutes to the animals below. Archie had three mules. Maude and Emma plowed the fields, and Pet was for riding. 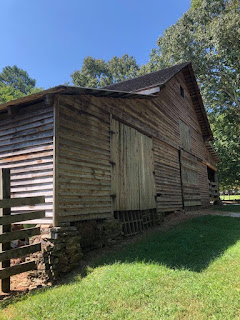 Down a winding path, a tiny but charming tenant house and outhouse with a half-moon door squat beneath a tree. The tenant system was a key element of Southern farms through the early 1930s, but mechanized farm tractors and the decline of cotton began a new era. Archie eventually stored plow blades and farm tools beneath the porch. Many pieces of early farm equipment are scattered beneath the shade trees in the yard of the main house now, including smoothing hares/harrows, a sulky rake used for gathering hay, a McCormick corn stalk cutter, disk harrows, and a four-disc cultivator.

The lower pasture was originally planted in cotton, but after the boll weevil invasion, it was converted to a cattle pasture for Black Angus. 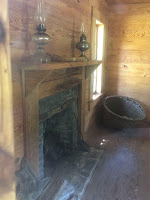 In the orchards, pears and apples were grown. In early days, tenant farmers helped with the harvest. Afterward, workers spent hours pruning and removing debris. Pears and apples were cut and dried on sheets, picnic tables, screen doors, or even on the roof.

Archie was known for his beautiful garden. The poles for vegetables were cut each year from the cane breaks along Sweetwater Creek.

Despite a sore ankle and a rumbly stomach, I left McDaniel Farm Park with a wealth of lovely photos and a sense of peace and amazement that such a historical gem is tucked in one of the busiest areas of North Atlanta. 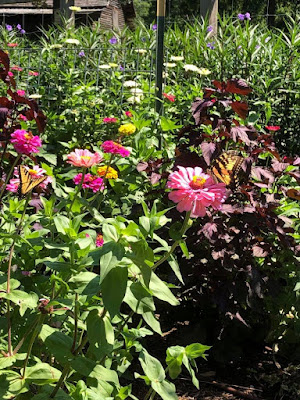 Posted by Denise Weimer at 2:30 AM