Guest Post: A Portrait In Courage and Faithful Obedience

By Jennifer Z. Major
The year is 1918, and all across the world, The Great War and the Spanish Flu were killing millions.
You come home to find that your young adult daughter has disappeared, along with her beloved Corona typewriter, and her steamer trunk. You call out for her, but all you find is this letter...
Dear Mother and Father;-
When you read this I will be on the way to Toronto, and please do not mourn for me as one dead but as one who has been called to do a privileged work for the king of kings. I cannot say what I would like to, it is just as well that I cannot. (I) realize that it will be years before I see this home again, and then you may be living in some more suitable and even pleasanter place. There has never been such a heart wrench as this and never will be again, for each succeeding time it get easier to pull up stakes. My thought is not for myself but for the lonely days that you will be called to see, but remember you are sharing in the work of spreading the "Good News" and nothing worthwhile comes easy.

At home I would eventually become a nuisance, at my work I will be fulfilling the purpose for which I was created, and which you are one with me in. I look forward to the days when darkened by African suns with laurels won for the master. I shall spend pleasant days with you both, I know. I feel that you will both be spared to each other for many years, and take it easy. I have one request and that is that you both take time to read the Bible and pray every day for me. My love for you both has not often been apparent, but my heart holds no two others so dear.
I shall be happy in my work and you will be in yours and you will think of me in a different way than if I were unhappily married in some home.
I would not change palaces tonight with any king. It is indeed a privilege to suffer with the Lord, and loneliness was one of His trials.
Though oceans will roll between (us), we are as near in heart as if I were in Toronto. God has been very good to us and we have been spared many a heart ache that others have had to go through. I will not be in danger that a nurse at the front will have to face before these days are over, and will return to you in His time. I wish I could express the feelings that well up in my heart at this moment, and the gratitude I feel for your kindness, of which I have often been most undeserving.
(I) forgive all that has been unkind as I know you have, and be cheerful for the sake of one that loves you.
Isaiah 41:10
Your loving daughter, Winifred.
Can you imagine the parents? I'd have fainted. Or worse.
My daughter? Running off to become a missionary during a war and a killer pandemic that was decimating the entire planet?
From this letter, which I corrected a bit for grammar and flow, it appears all was not well between her and her parents. But no matter what, Winifred was as brave as brave gets.

And yes, Winifred survived her missionary adventures and returned home to Canada. I'm not exactly sure when she returned, but she was very special to my family. Many decades after this letter was written, my dad arrived in Canada and had nowhere to live. Someone gave him the name of an older lady who ran a rooming house in her big Victorian home. He lived there until he married my mother in 1975. She loved my dad like a son, which was a gift, when his own family was on the other side of the world.
She’s long gone, but never forgotten. I have her steamer trunk, and now her typewriter and farewell letter. I also have her bird's eye maple dresser, and her dining room table, at which I am sitting as I type this. I met her when I was younger, when I was too clueless to see beyond her white hair and her age. I wish I'd have known then what a courageous girl she was. She was a ground breaker for many women for whom more was out there, they just had to get from where they were stuck, to there.
Tell me your thoughts on the letter, I'm curious to know what you see between the lines.
The Isaiah verse is..."So do not fear, for I am with you; do not be dismayed, for I am your God. I will strengthen you and help you; I will uphold you with my righteous right hand."
******** 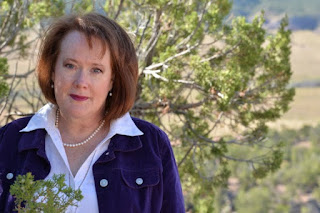 Bio: Jennifer Z. Major is a Vancouver native, now living in Eastern Canada. She and her tree scientist husband have four children. She's crisscrossed the American Southwest and Latin America several times, and hopped, skipped and jumped across Europe, once. She has written two novels based on Navajo history and will soon complete her third. She’s never been arrested, but takes fence-climbing very seriously.
Posted by Jennifer Uhlarik at 1:00 AM